Ed Miliband this week pledged to increase the national minimum wage to more than £8 per hour by 2020 from the current (October 1) rate of £6.50. The level of the minimum wage matters, not just because there are 1.4 million workers on the minimum wage, but also because in-work poverty has recently outstripped out-of-work poverty. Yet some have already questioned just how significant a £1.50 raise over five years will be. Given the enormous economic disparities between cities – some of which have large numbers of jobs but high costs of living, and others that simply have too few jobs on offer – there is a risk that the impact of Miliband’s announcement could be limited for workers in many UK cities.

There is no doubt that the minimum wage plays an important role in ensuring workers have a reasonable baseline standard of living. Not only does it increase wages for those receiving the lowest pay, it also has a ‘ripple effect’, pushing up the wages of workers earning just above the minimum wage. And despite fears, there remains little evidence that it’s had a negative effect on jobs. Beyond the individual, it can also have a positive impact on business and the economy as a whole, particularly through encouraging higher levels of consumption. And at a time when the UK faces a productivity crisis, it may also mean that businesses respond to these increases in costs by raising productivity.

But as our Unequal Opportunity report highlighted, a national minimum wage does not sufficiently compensate workers in high cost cities like London or Cambridge. While there are more jobs in these cities, the cost of living means that many workers in low paid jobs can be worse off than workers in similar jobs in other cities. Estimates tell us that once housing costs are taken into account, the bottom 25 per cent of workers in London and Oxford earn half that of low wage workers in Derby or Warrington.

US Cities Leading the Way

In the US, cities have responded to high costs of living by setting their own minimum wages. Seattle made the headlines earlier this year as its City Council voted to increase the city’s minimum wage to $15 per hour, double the current federal minimum wage. Prior to introducing the legislation, Mayor Murray’s Income Inequality Advisory Committee (IIAC) commissioned two reports to examine the potential impacts of such a decision, one of which found “no statistically significant negative effects on employment or hours at an aggregate level or for low-wage industries such as restaurants and retail stores”.

Sceptics may say the UK is too small to move beyond a standardised minimum wage, given its population is only a fifth of that of the United States’. And yet, Seattle is roughly comparable to the size of Manchester or Leeds. Santa Fe, which was one of the first cities to adopt a minimum wage distinct from its state over a decade ago, has a wider metropolitan area population of 144,000. In all, 38 states have introduced minimum wage bills so far in 2014, and 23 states and D.C. already hold minimum wages above the federal minimum. There are also nine local minimum wage laws. The lesson here for the UK is that scale is not the most important factor in a minimum wage debate, and the diversity of local needs and business environments can be accommodated.

Figure 1:  Minimum wage laws in the US 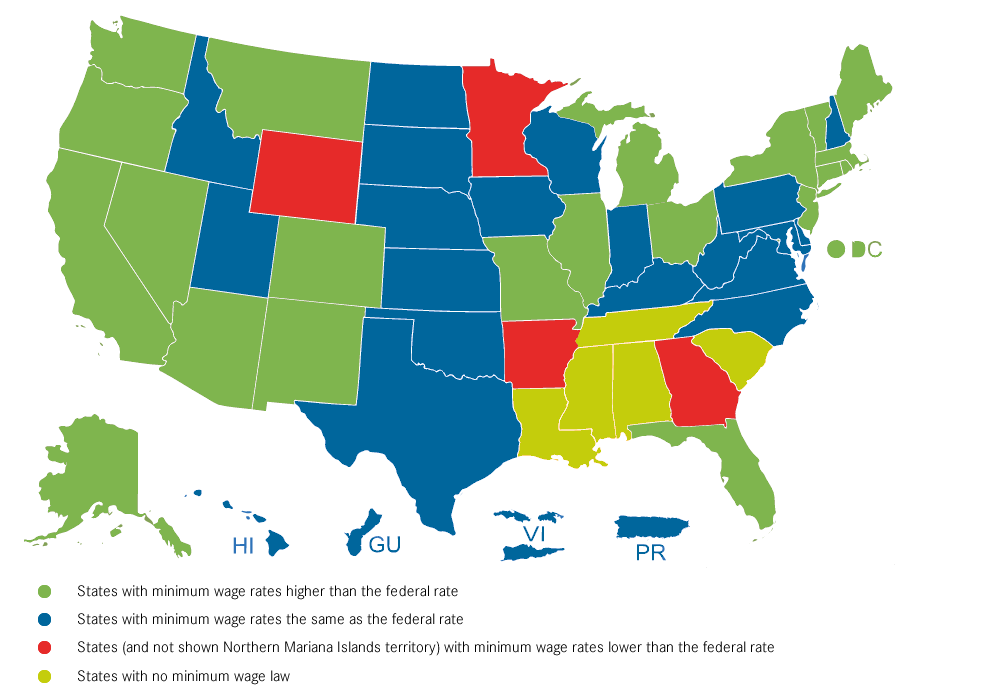 Source: US Department for Labor (http://www.dol.gov/whd/minwage/america.htm)

As a first step, we would recommend the Low Pay Commission works with those UK cities and city-regions where the argument for introducing the minimum wage is most compelling, to assess its potential impact. Of course, a proper assessment would require better data and more data sharing from National Government departments like the HMRC.

To be most effective, however, minimum wage policies will also need to go hand-in-hand with other measures designed to reduce the cost of living. For example, cities and National Government need to act now to increase house building where it is most needed, to slow exorbitant house price rises. They also need to look at ways to lower the costs of transport and childcare (the UK has the highest childcare costs in Europe).

In other cities where costs of living are lower and unemployment rates are high due to the lack of jobs, the focus must be on economic development and raising demand for jobs and skills by creating an environment in which businesses can thrive.

Whatever the answer, one thing is clear: a national minimum wage – whether set at £6.50, £8.00 or higher – can only go so far to alleviate the problems facing workers in different parts of the country. The pressures experienced by workers and employers in Hull are very different to those in London. If we accept that cities across the UK face very distinct circumstances, then we must empower them to respond to the specific challenges they face.