There’s no doubt that fibre optic cable straight into your home is the best internet technology. And as we argued in our report How cities can make the most out of digital connections (sponsored by O2), cities should remove barriers to investment in this technology, and all new homes should be built with it or passive provision for it.

As such, for places considering how to improve digital connectivity, the temptation might be to devote valuable resources to increase availability of fibre. The fact that only 4 per cent of UK premises currently have this top-of-the-range connection (compared to 90 per cent in Portugal) is often highlighted as a reason to do so

But as our report shows, a better way for cities to improve digital connectivity is to focus efforts on building up the skills and confidence of local people – many of whom will hardly be using the internet they already have – rather than subsidising a technology which many people are yet to find a practical use for.

The case for devoting investment to improving digital tchnology is undermined by three issues:

1. It’s hard to argue that a lack of fibre to homes is a significant drag for the economy.

Businesses that want or need fibre can get it. Among the various costs including rents, rates and wages, a leased fibre line is a relatively minor, albeit significant cost.

2. The difference between fibre and Superfast Broadband is invisible to most people.

Bemoaning how far the UK trails Portugal in fibre coverage would have more traction if it was clear exactly how UK residential internet users are worse off. For example, in the UK we have almost national coverage of minimum 36Mbps Superfast Internet, with 97 per cent of people able to sign up if they choose to do so (but many do not).

And unless you are looking to run a gaming server or connect double-digit numbers of devices, you wouldn’t notice any difference between a fibre or superfast broadband connection, for example while streaming UltraHD Netflix.

Delivering change – how cities can make the most of digital connections 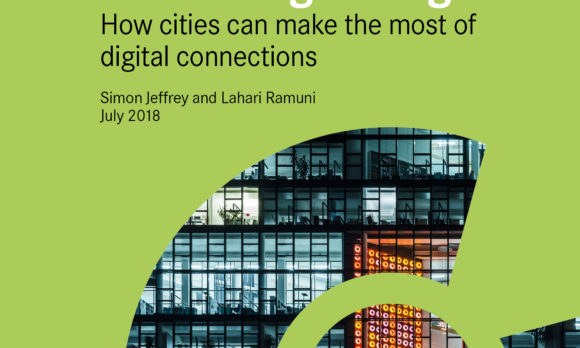 3. The private sector is already acting to improve digital networks.

As dense clusters of potential customers, cities are the most attractive areas for private investment in digital networks, from fibre to 4G and soon 5G.

As such, cities should instead focus on ensuring that any barriers – from unnecessary planning hurdles to disaggregated fibre demand – don’t get in the way of this investment. For example, cities such as York and Milton Keynes – which are pushing to become the first ‘gigabit cities’ – have worked hard to smooth these issues, so that private sector investment as easy and appealing as possible.

As Centre for Cities has argued, take-up of Superfast Broadband where it has been subsidised is still only up to around 50 per cent now. And among those who have been convinced to pay extra every month for higher speeds, it’s not clear that many are actually using the internet more than those with slower speeds their internet. Some people may just like to buy the fastest available package.

This fits with the Government’s review of its £1.6bn programme to increase Superfast Broadband provision, which found that it offered little benefits to residents, while surveys found no increase in wellbeing reported by those with faster internet. Subsidising even faster internet for these users in a market where the private sector is highly active should not be in urban leaders’ plans for improving digital connectivity.

Instead, cities should do two things:

Firstly, they should focus on addressing the clear market failure – helping the millions of people still lack the competence and confidence to thrive online, many of whom are from deprived communities. That means equipping these people with the skills they need to get online or more confident using digital services.

Devolved adult education budgets would allow cities to do more to give residents the skills, confidence and awareness to book a doctor’s appointment or do their shopping online – simple things which could nonetheless make a big difference to their everyday lives. Government should consider switching some of its focus and resource from connecting homes to fibre to ensuring that Local Digital Skills Partnerships have all of the resources necessary to get people connected to the internet.

Secondly, cities should reduce the barriers to accessing services online. For example, they should go further in making online the quickest and most convenient channel to access public services, to attract the reluctant or holdouts. That means taking simple steps such as redesigning online forms from council tax to planning applications so that they are as simple as possible; and considering a secure central registry with individuals’ data that make the process even easier by reducing the need to filling in the same personal information over and over. Our report highlights fantastic examples of how councils such as Salford are improving user experience in this way.