Immigration is among the most explosive election issues. Its relevance to voters has propelled previously fringe parties into the headlines – but what does the wider immigration debate mean for cities?

The most recent national data puts net annual immigration at 298,000. At the last election, it was 256,000. Clearly, this increase has not gone unnoticed – but the rhetoric doesn’t always match up to the reality. While the rise of UKIP is based on migration being seen as a burden, the increased growth forecast set out in last week’s budget was partly the result of unexpectedly high immigration last year. And while the numbers have been widely debated, the geography of immigration has received much less attention.

Which cities do migrants move to? 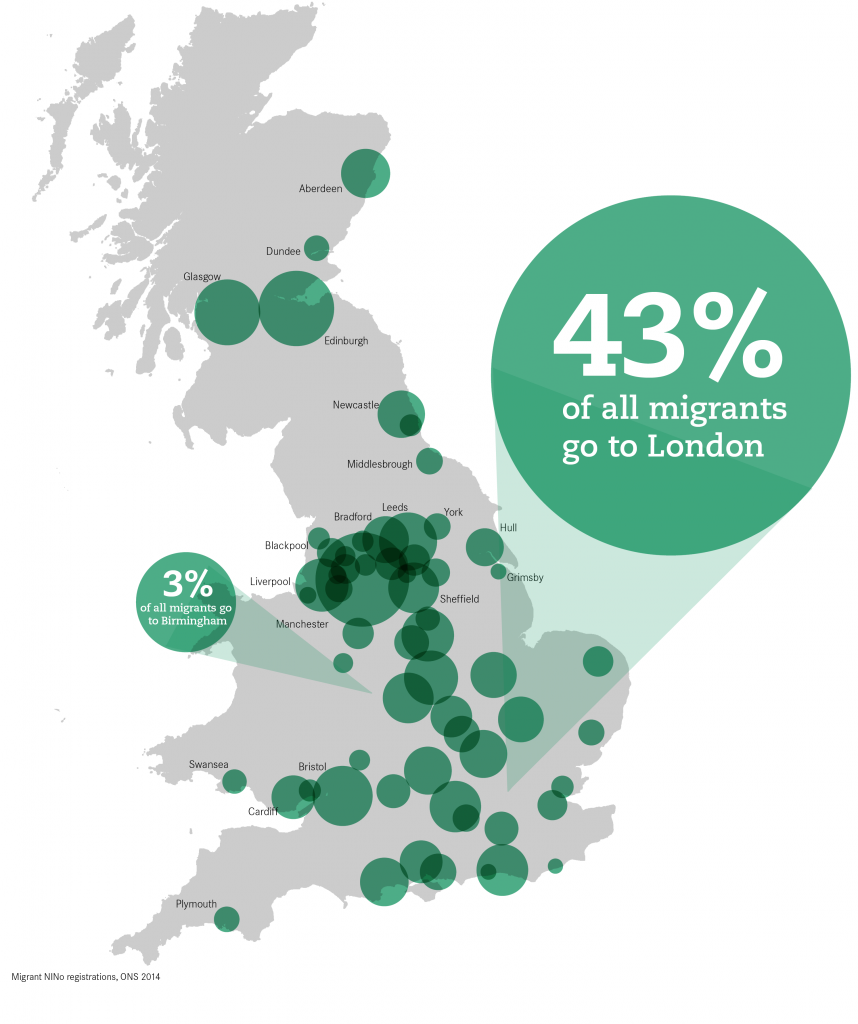 As our analysis shows, migrants are not spread evenly across the country. Migrants primarily locate in cities, and particularly in London. Furthermore, across Britain, the destination of migrants tends to be guided by their skills profile: a pattern that has an impact on the economic prosperity of our cities.

Whichever party (or parties) are in power post-election, they will need to look carefully at the experience of cities in order to deal with not just the challenge, but the opportunity, that immigration poses for our economy.

Immigration is a key election issue. All the major political parties have spoken about it, and their policies are broadly similar in terms of direction, if not in detail. All want to reduce immigration. And while there are currently no proposals from any party to introduce a cap (UKIP having recently rescinded their proposal to introduce one), there are targets. The Conservatives, for instance, have expressed their intention to reduce migration to ‘tens of thousands’ using incentive-led responses.

All the major parties also propose to introduce stronger border controls on illegal immigration, as well as restrictions on the ability of migrants to claim benefits.

Most of the parties have also addressed the need to distinguish between high- and low-skilled migrants, but none have yet said how they will practically do this.

Migrants matter to cities. 78 per cent of all immigrants arriving in Britain and 77 per cent of those with a degree locate in cities. Cities offer greater economic opportunities to people, so it is no wonder that they attract the majority of immigrants coming to Britain. Migrants also make a significant contribution to the population and labour force of cities, and any change to immigration policy will be felt the most in cities, and by the businesses that employ them.

43 per cent of all migrants go to London. The next most popular destinations are Birmingham and Manchester, but they each attract just 3 per cent of migrants. This means that London in particular will feel the effects of changing immigration policy.

London accounts for 32 per cent of all KIBS jobs in Great Britain and is home to 48 per cent of all degree-holding immigrants. London’s ability to attract migrants allows it to reap the benefits of their skills, while other cities miss out – especially because there is a strong relationship between where migrants choose to go, the skills profile of those people, and the number of jobs in KIBS in cities. Birmingham and Manchester, which have the next highest proportions of KIBS jobs outside of London, also attract a higher proportion of migrants to England and Wales with degree-level qualifications.

But at the other end of the scale, cities such as Barnsley and Grimsby, which have some of the lowest proportions of KIBS jobs nationally, are struggling to attract migrants. Each attracts just 0.1 per cent of migrants, and these tend not to be high-skilled workers – just 0.007 per cent of migrants with degree level qualifications locate in Barnsley.

Immigration is an urban issue. Cities attract the most migrants, and as a significant proportion of the economically active population, they are crucial to the labour force of cities. This suggests that policies aimed at restricting migration will have a strong impact in cities.

The cities with the weakest economies have relatively low migrant populations, meaning they would be less likely to notice a difference. But our most economically successful cities, which attract the highest share of migrants, will feel the impact of new policies the most.

The Mayor of London’s call for a quota for skilled migration in London reflects the need for policy to take skills into account for cities, but this alone is not enough. National immigration policy should account for the impact it is likely to have on our most economically vibrant cities.

Moreover, arguments for or against new restrictions on immigration should not be limited to the contribution of migrants to the tax base or their demand for social services, but should also consider the skills and entrepreneurial talent, crucial for local economies and certain industries, that immigrants bring with them.

The future of the UK economy relies on the ability of UK cities to stay competitive as global centres of business and innovation. In order to do this, they need to attract global talent. It is important that immigration policy is designed to support, rather than restrict, the growth of UK cities.