The local elections are nearly upon us. Not only will 10 cities be voting on whether to have a directly elected mayor, with Liverpool and Salford voting on who their mayor will be, but all 36 metropolitan boroughs and 16 unitaries have a third of their seats up for election, with many cities likely to see changes of control. But to what extent will the local elections change the political landscape of the UK?

The map below shows, unsurprisingly, that most cities are run by Labour, particularly if their economies are struggling or stable, although there are exceptions such as Wirral (Birkenhead), Derby and Burnley.  It also illustrates that the Conservatives are more likely to run cities in the south-east; a finding echoed by Policy Exchange’s Northern Lights report this week. 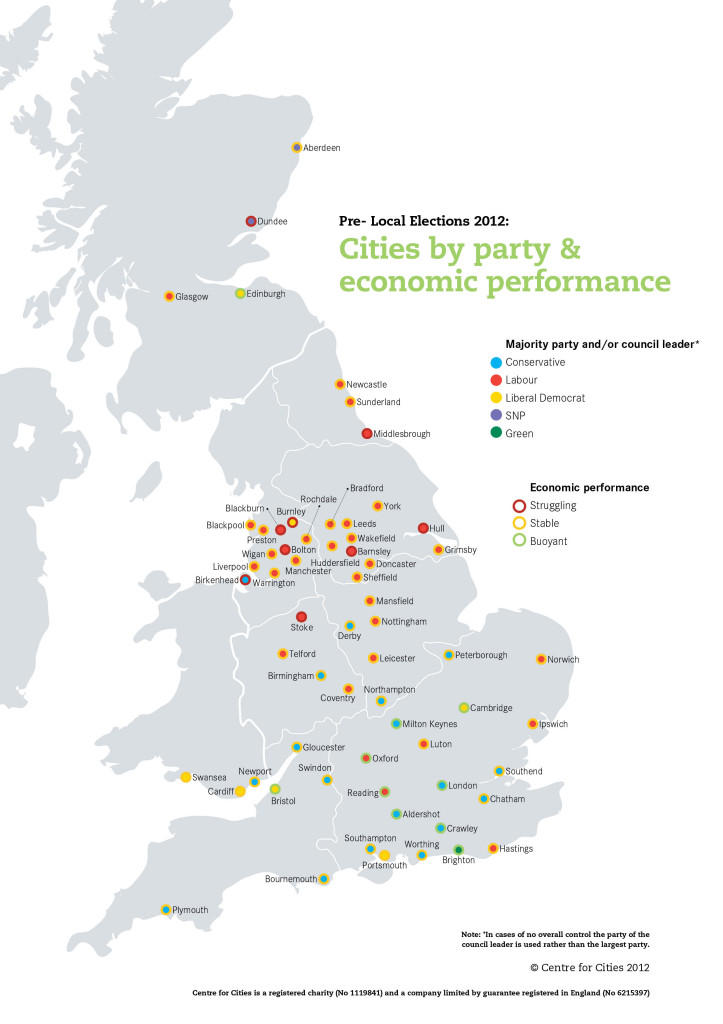 So how will this map have changed by 4th May?

First, reflecting national polls, we’d expect Labour to gain a lot of seats in city centres, particularly in the metropolitan authorities.  Although given that Labour already control many of the major cities in the North, this won’t alter the urban status quo a great deal. Cities to watch include Glasgow, where Labour’s dominance is under threat from the SNP, and Derby, Plymouth and Swindon (as highlighted by the LGIU), all cities currently with Conservative leaders that could be Labour by Friday.

Second, we’d expect the Lib Dems to continue to lose seats, to the Conservatives and to Labour. Nick Clegg’s appeal earlier in the week to the voters of Newcastle, Sheffield and Liverpool is unlikely to be enough to return them to Lib Dem control, although the Lib Dems will be hoping that Portsmouth will be an exception to the national swing.

Third, we’d expect the Conservatives to hold many south-eastern cities, and many of the authorities bordering city centres – authorities such as Blaby (Leicester) and Havant (Portsmouth).  There are far more Conservative councillors in cities when you look at the built-up area, rather than just the city centre. Which means that cross-party working will still be vital to support economic growth in most cities.

Fourth, the story of the night is likely to be Boris bucking the national trend and winning London, despite it being a predominantly Labour city. This would demonstrate thatmayors can rise above party politics and be known as individuals, judged not just on their political affiliation but also on their policies and personalities.

This ‘mayor effect’ will become important in cities that vote ‘yes’ to mayors on Thursday. By Friday we’ll know who the mayors of Liverpool and Salford are – likely to be Labour – and how many cities will be voting for their first mayor in November. The wording of the question, which encourages people who are unaware of the mayoral referenda to opt for a mayor because it is a ‘change’ rather than the ‘status quo’ could still throw up some unexpected results. So while some cities seem more likely to say ‘yes’, such as Birmingham and Bristol, and some seem more likely to say ‘no’, such as Newcastle and Sheffield, at the moment it’s going down to the wire.  It’s hard to be certain about any of the results, with concern locally about whether anti-politics feelings might affect the final outcome.

Nothing is guaranteed and we’ll be watching the results – and considering their implications – with interest.