Last weekend the Prime Minister made his second call for office workers to return to their desks in a bid to support the struggling high streets of the UK’s largest city centres. What’s curious is that while people have responded to the easing of lockdown of leisure amenities, the PM’s requests for people to return to their city centre workplaces appear to be falling on deaf ears.

The chart below shows the change in footfall in the UK’s 63 largest city centres after a series of policy announcements. Footfall in the two weeks following the opening of non-essential shops (in June) and pubs and restaurants  (4th July) saw an increase after each announcement from Monday through to Sunday. And the Eat Out to Help Out scheme saw footfall pivot, with a boost to Mondays to Wednesdays. Meanwhile there was no strong drop off later in the week – although weekends were very slightly down – suggesting that people did not simply shift their nights (or days) out. 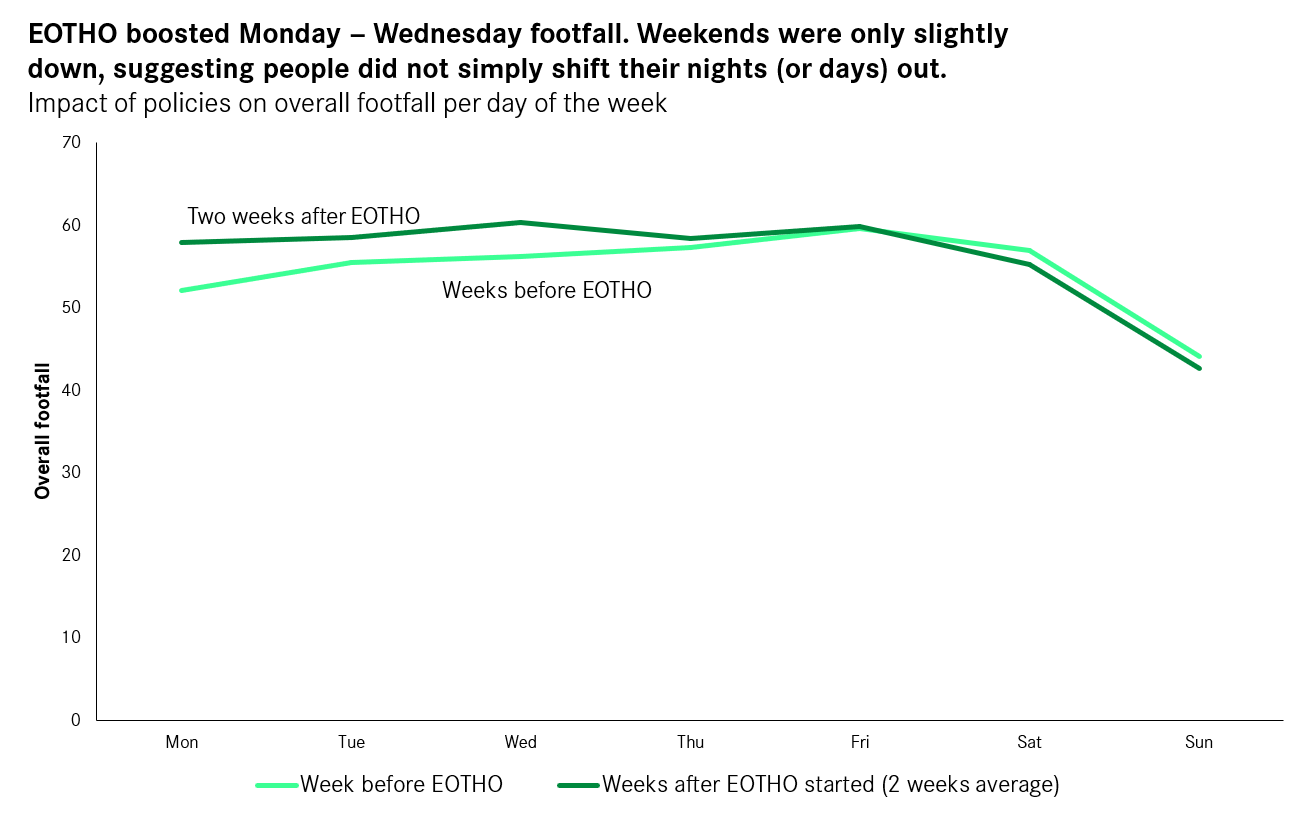 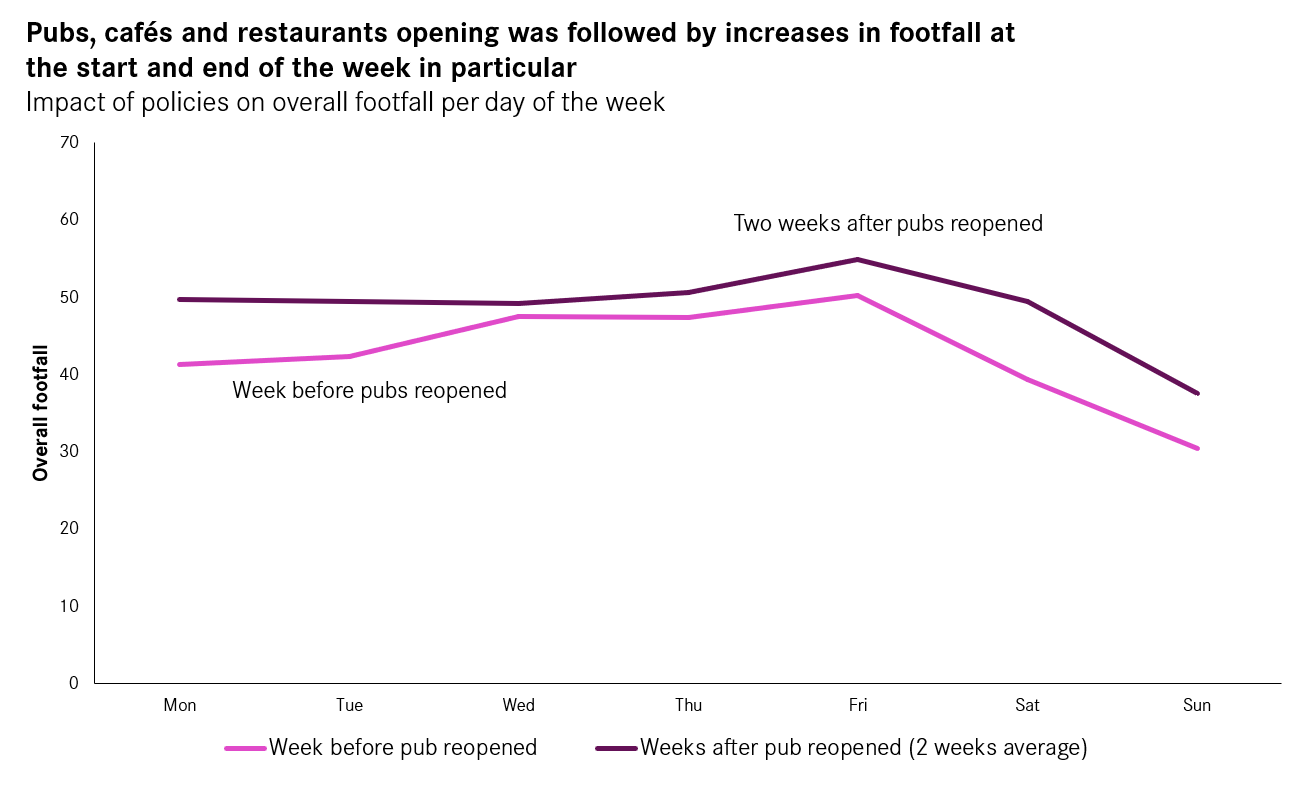 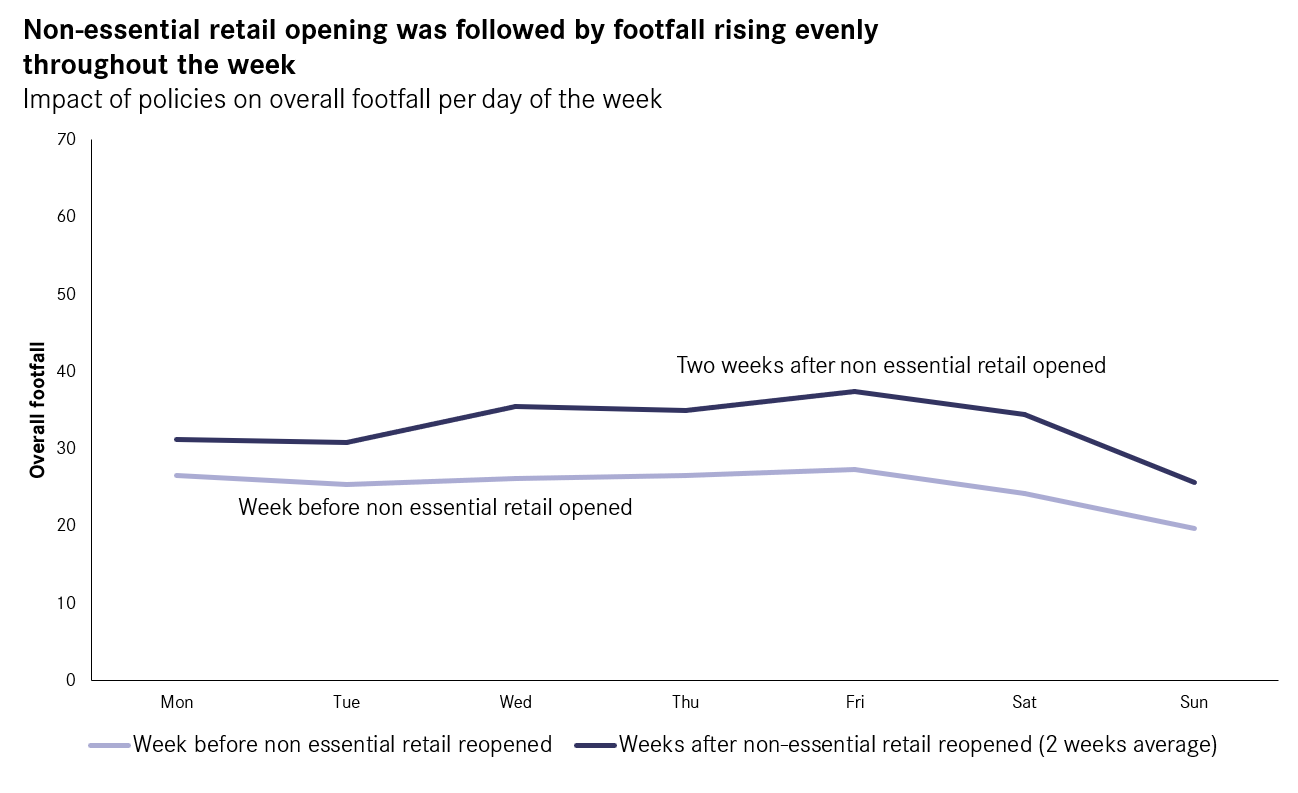 But there was no such response to the Prime Minister’s first request in July for workers to return to the office, especially in large city centres. In central London and Manchester, early August weekday footfall rose by just one percentage point compared to early July. Leeds, Bristol and Nottingham all saw no change. And in Birmingham city centre the number of workers fell.

Last weekend Boris Johnson tried again, this time in a slightly more barbed way. Looking at the sluggish recovery in footfall in large city centres it’s clear to see why the PM is so keen to get workers back to the office. The ability of these centres to pull workers in from far and wide was a boon for their high streets. But they are now hamstrung by the reluctance of workers to return, with implications for the shops, cafes and restaurants that had built their businesses on their custom.

Our High Streets Recovery Tracker, sponsored by Nationwide, will soon show whether there is a response to this second request. But with many companies already telling staff they aren’t expected to return until the end of the year, the Government may need to extend support to the high street services in our largest city centres if there are to be any amenities for these workers to return to.

More on cities and Coronavirus

The release of workplace data from the Census shows how little guide it provides for the next decade of policy decisions.

More than a year since the Covid furlough scheme ended, most urban areas appear to have bounced back to pre-pandemic employment levels – with just a couple of exceptions.

The latest release of Census 2021 data shows that cities in the Greater South East were the most popular destinations for migrants over the last decade.

Guilherme Rodrigues calls for clarity over the UK's domestic policy if UK cities are to keep pace with their European counterparts.