Climate change is a global challenge and world leaders will be meeting later this year in Glasgow at the COP26 conference to set plans towards carbon neutrality. Tackling climate change will require tough choices from city leaders too, as the goal of net zero carbon emissions depends in part on decisions only they can take.

The recent Centre for Cities report Net zero: decarbonising the city shows that British urban residents have, on average, a lower carbon footprint than non-urban ones. Cities reduce people’s impact on the planet by promoting more energy efficient lifestyles. Also, the report shows that encouraging density, which will require planning reforms, is one of the tools cities have to reduce carbon emissions. Carbon emissions in different parts of London show why this is the case.

London is a particularly good example to understand how carbon emissions vary within a city. Unlike most British cities, carbon data at the local authority level (32 different areas) provides a clear picture between different types of urban of living.

Londoners have different carbon footprints depending on where they live; and these differences are mainly caused by transport-related CO2. Islington and Hackney boroughs – denser and closer to the city centre – have relatively low levels of transport emissions per capita (below 0.5 tonnes of CO2 per year). While more suburban areas, like Havering and Hillingdon, can reach transport emissions 3-4 times higher than the former.

The lower carbon footprint in central boroughs results from a combination of better public transport networks and proximity to jobs and local services, which reduces daily car dependency. In the local authorities surrounding the City of London, the percentage of workers commuting by public transport or active travel was typically above 65 per cent. On the opposite end of the spectrum, 49.5 per cent of Bexley’s (much longer) commutes were done by private vehicle.

Figure 1: The closer to the city centre, the shorter and greener the commute 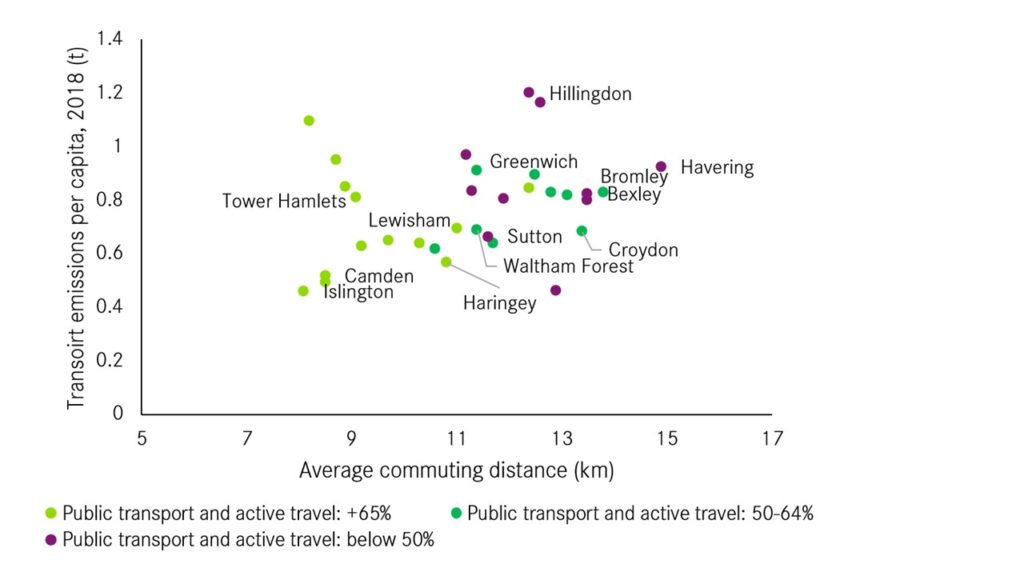 Households in central areas, with better transport networks, are less likely to own a car. Car ownership rates in outer London can be three times higher than the ones observed in inner-city local authorities. This is particularly relevant because commutes only represent 15 per cent of car trips in the UK. The majority of transport-related carbon emissions result from activities other than commuting, like shopping and leisure activities. Not owning a private vehicle will naturally reduce this type of carbon footprint.

Figure 2: Denser areas reduce the need of having a car 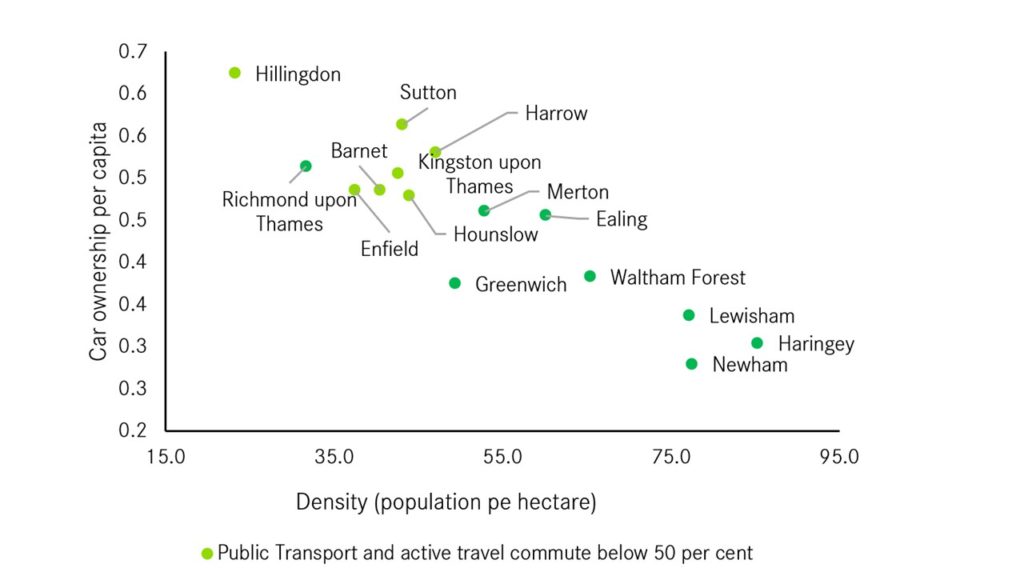 Solutions to reduce transport CO2 are frequently associated with technological changes (Electric Vehicles) and direct disincentives to car usage (Clean Air Zones and Workplace Car Levies). Nevertheless, those policies must be complemented by climate friendly urban planning. London provides clear evidence that carbon footprints can drastically diverge within the same city, depending on the characteristics of a neighbourhood.

The current planning system promotes building in the cities’ outskirts, increasing carbon emissions due to suburban sprawl. In order to reach carbon neutrality by 2050, the existing system must be reformed, with the introduction of a flexible zoning system. This could be achieved through the renewal areas defined in the Government’s proposed new planning system.

Such change would facilitate gentle densification of existing built-up areas towards European levels of density. Consequently, this would allow households to reduce their car dependency by living closer to services, jobs and public transport networks. Moreover, it will also make other green policies, such as public transport investment and devolution, more effective. A new planning framework will allow British cities to embrace both the increase in homes and better public transport in their journey to achieve net zero carbon in the decades ahead.

Air quality
Net zero: what is the carbon footprint of my city?

Explore the carbon footprint of your city or town to see how sectors contribute to total carbon emissions and how it compares to other places.