Since March 2020, the British economy has been hit hard by a pandemic-induced recession. With the vaccination rollout ongoing and restrictions being lifted, the economy is expected to rebound quickly over the next months. However, recent history – supported by the Centre for Cities’ high street recovery and unemployment trackers – suggest a more nuanced picture: cities grow very differently from each other. Consequently, monitoring the UK as whole rebounding (close to real time) will not tell us what cities are actually recovering.

Furthermore, regional economic data, which is sometimes considered higher quality, is of little help for investigating the performance of individual urban economies, because cities’ labour markets vary as much within regions as they do across the country.

Regions are not a coherent economic geographies by themselves; and like in national figures, relevant insights are lost in the process of aggregating different places together. This highlights the importance of using local expertise and devolved powers at the city level – instead of a regional approach inspired by the Welsh and Scottish experiences – to understand the challenges of each city in the years ahead.

The lack of official data close to real time, at the urban level, must be seen as a real policy constraint. Without clear information about how places have been economically affected by Covid-19, it will be hard to identify which places need to ’level-up’ the most. The Centre for Cities has not found a strong historical relation between cities’ economic growth and socioeconomic indicators such as claimant count, employment or house prices. Under such circumstances, it is crucial to find alternatives to measure urban economies close to real time, instead of relying too much on individual metrics that can lead to deceptive conclusions.

A national recovery does not mean all cities will recover equally

Historically, recessions have different drivers but they also present common features, and the evidence on prior recessions can help us understand the post-pandemic challenges. In 2018 (latest period available at city level), after a long recovery, the British economy was larger than its pre-crisis levels, a trend observed across all its regions.

However, the recovery and its ‘jobs miracle’ hide the geographical differences of the recovery. There are five cities that did not entirely recover from the financial crisis, while twelve other cities (from six different regions) such as Norwich, Coventry and Bristol grew by more than 20 per cent in the same period.

These economic disparities across cities do not strictly follow the North-South divide. Ten years later, Hull and Gloucester economies were smaller than its 2007 levels by 7.8 per cent and 4.3 per cent, respectively. At the same time, Milton Keynes and Doncaster outperformed the UK as a whole, by growing 42.8 per cent and 28.4 per cent, respectively.

This highlights the importance of monitoring the economies of each city. If policy makers mostly rely on national figures, they will not be able to identify the winners and losers behind UK’s recovery. Consequently, the government will not be able pinpoint which cities face the biggest ’levelling up’ challenges over the next few years.

The data on cities’ economic output does though lag the actual economic recovery – the evidence above only goes up to 2018. If we want to investigate how cities are performing and recovering today, then we need to use different data and quarterly regional economic statistics could potentially be an alternative.

The debate on economic inequality across geography is frequently presented in regional terms – the North-South divide – implying that regions are uniform blocs that either outperform or underperform the rest of the nation. If that would be correct, the existing quarterly regional economic statistics would be a good way of monitoring cities’ economies on a regular basis. That said, such analysis misses the fact that regions face severe divides themselves. The success of a city is explained by its industrial composition and the skills of its workforce, not by its location.

All regions in Britain, except the North East, had at least one city growing above the national average (2007-2018). Figure 1 shows that, even though separated by roughly 185 miles, Edinburgh and Preston grew at a similar pace and outperformed the national average; while diverging from their neighbouring cities, Glasgow and Blackpool, that had a much weaker economic performance.

These divergences show that regional economic statistics – just like national data – are not a suitable predictor of cities’ economies. Regions are simply a collection of urban labour markets with different characteristics and performances. They do not cover coherent economic geographies, as they do not reflect the reality of the economy which most workers live in day-to-day, which is within a few miles of their home, workplace, and schools. Instead they are designed to organize statistics for policymakers in the centre, and they do so poorly.

An implication of this is it important for devolution to continue at the city level, instead of deepening regional devolution. The former will allow local policy makers to use local expertise – in the absence of data in real time – to understand and address the most critical issues facing their local economies. Regional devolution would likely repeat the centralization we have seen in Wales and Scotland, where cities and accordingly urban labour markets are neglected by policymakers.

The lack of official data close to real time is not (simply) a research question, especially during recessions and the following recovery. Based on official data, the public will know by 2023 how much each city has recovered from the pandemic in 2021, which is too late to start a targeted recovery agenda.

At the country-level, policy makers like the Federal Reserve have been addressing this issue by estimating the economy at real time (process called nowcasting), where data lags are relatively short (2 to 3 months). Nevertheless, such estimates still do not allow them to identify which places are struggling the most and adapt their policies, if necessary.

Nowcasting at the city level seems to be even more challenging than nationally. First, Figure 2 shows that cities tend to be much more volatile and unpredictable than the country as a whole. Cities like Sunderland and Newcastle have frequently diverged (both undershooting and overshooting) from the national average: in 2012, UK real GVA grew by 2.2 per cent; while Sunderland grew by 8.4 per cent and Newcastle contracted by 4.0 per cent. Second, the Centre for Cities has found that these fluctuations are not easily tracked by looking at socioeconomic variables (e.g. claimant count, employment levels, demographics growth and house prices), which makes it difficult to understand how specific cities have been affected by Covid-19. To measure the success of ’levelling up’ and fine-tune economic policies in useful time, there must be a concerted effort to nowcast cities’ economies. Without such tools, it will be hard to know where and how an economic strategy is actually working.

Figure 2: The best data we have on cities’ economic growth shows high volatility 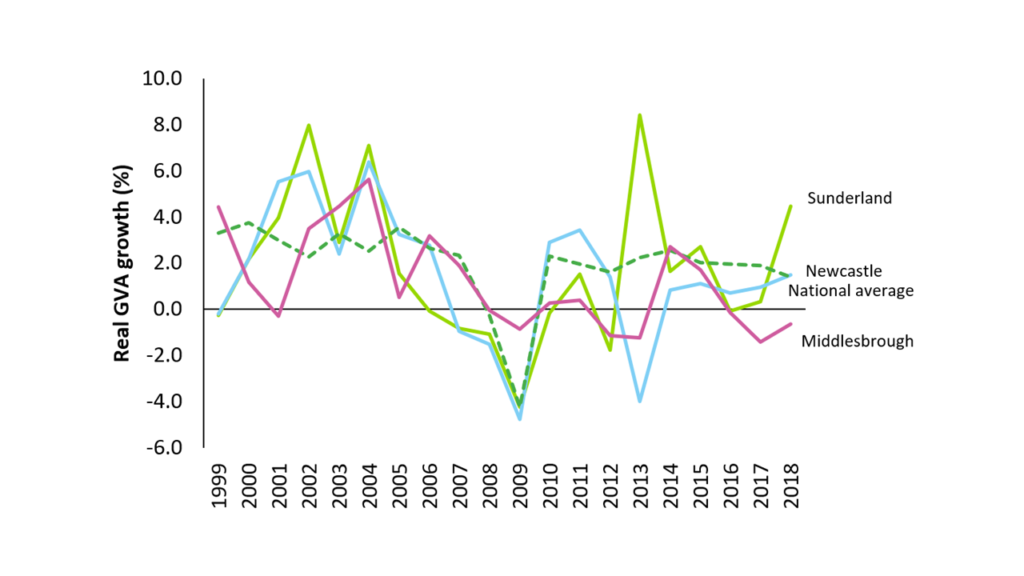 Past experiences have shown us that a national recovery will not guarantee that all cities will rebound from Covid-19 over the medium-term. The central government must be aware that the existing geographical inequalities are mainly result of urban (not regional) features, as cities differ as much within their regions as they do across the UK. As result, a successful ’levelling up’ strategy needs to identify and address urban economic problems instead of looking at regions as economic blocs.

Moving the whole country out of a recession is a hard task under any conditions but it becomes harder without the necessary tools to identify which places are struggling the most in real time. It is fundamental to devolve more powers at the city level – allowing local governance to use its knowhow and collaborate with central government – while putting efforts towards measuring cities’ economies close to real time (nowcasting). Otherwise, policy makers and the public will not be able to measure the geography of the recovery in useful time, while they risk misinterpreting the current events based on a handful of available variables.