Last month, the Prime Minister announced that “county deals” will be part of the Government’s levelling up programme. Just as the metro mayors for the city regions were created by “city deals”,  the current Government wish to roll out a similar approach for the rest of England.

Centre for Cities has previously set out how local government should be reformed to help achieve levelling up. The county deals are a chance to achieve what needs to be done, and improve local democracy, governance, and prosperity. County deals should match local economic geography, and therefore be centred on cities and large towns; ambitious proposals from mayors county deals should include mayors (or “sheriffs” in the shires); and councils should try to align the new county deals with the new planning reforms, and Government should support those councils which try to do so.

Places will have to design the geography of their county deals when making their proposals. The Government has signalled they are prepared to be open-minded on this, within two conditions set out in the Prime Minister’s speech – devolution will occur “where there are obvious communities of identity and affinity, and real economic geographies”. Different combinations of councils, including county councils, districts, and unitaries will all be valid under this framework.

As a result, local authorities have a clear idea of what they need to do to get the funding and autonomy that the county deals will provide, and the freedom to build deals that work. Rather than trying to replicate the existing, dysfunctional structure of local government, councils should show a willingness to break the mould and present county deals that better align local democracy with local economies.

In practice, the importance of economic geography to the county deals means that when possible they will need to be built around urban economies. While this will not be an issue for rural counties such as Cornwall or Herefordshire, many counties will contain or sit adjacent to cities and small towns which drive the local economy.

County deals which focus on improving local urban economies will maximise their benefits. Devolution deals will support prosperity in the hinterlands of towns and cities if they give urban economies the room to grow, by ending local government’s artificial divide between town and country. The map from the Centre for Cities proposal for reformed local government in Figure 1 does this and will be a good starting point for any county deals. 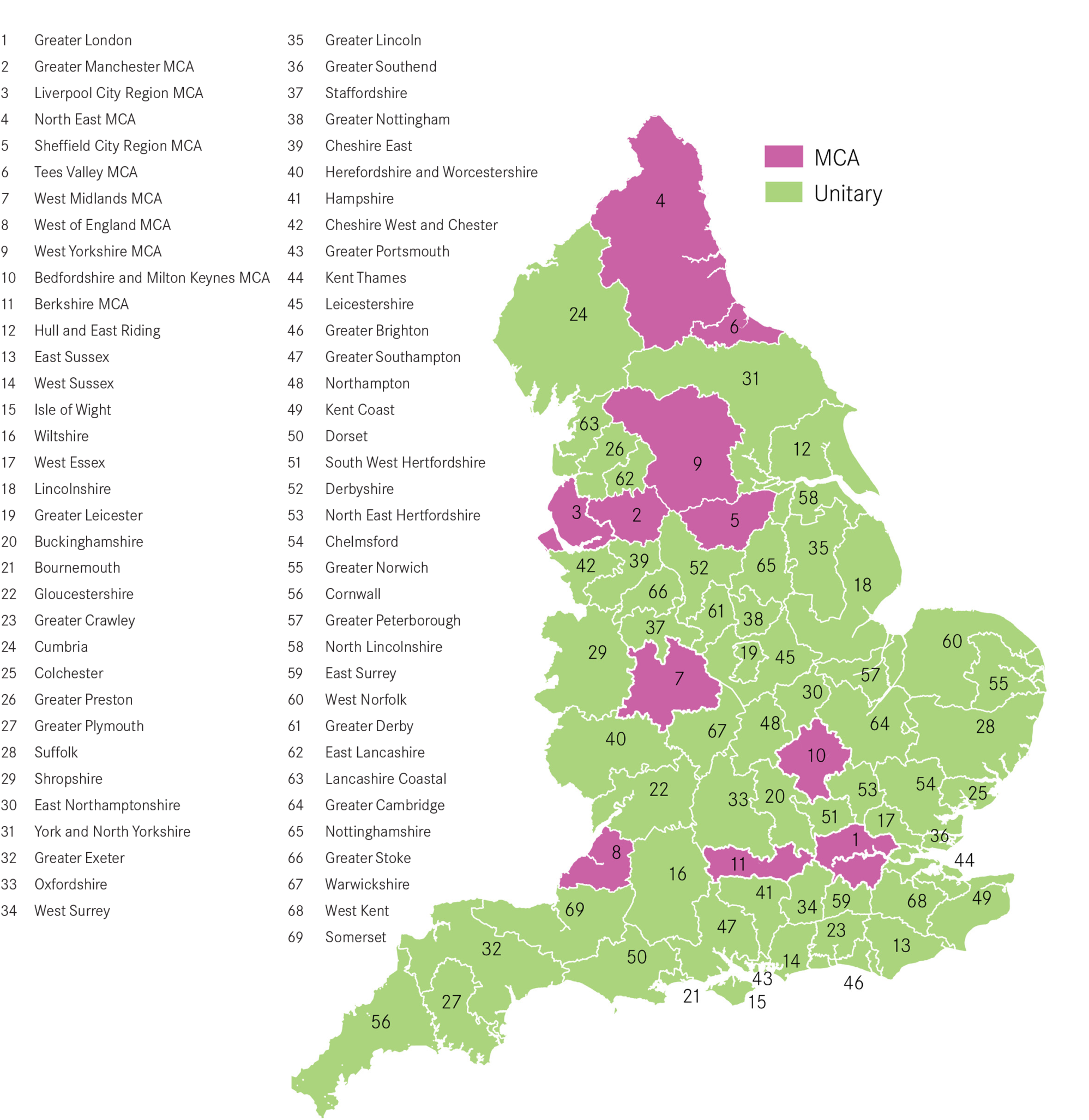 Source: Levelling up local government in England, Centre for Cities

As the map shows, this round of devolution is also an opportunity to complete the geography of the existing metro mayoralties. North Somerset is the missing piece of the puzzle in the West of England combined authority, and the North of Tyne combined authority currently splits Newcastle down the middle. The Government should live up to the commitment to economic geography that it has just restated by ironing out these wrinkles in the new structure of English local government.

New devolution deals should have mayors (or sheriffs)

Strengthening local leadership has been a consistent objective of the devolution process within England. Electing mayors was a condition of devolution to the metro mayor areas for this reason, and the high public profile and support the metro mayors as institutions enjoy has vindicated this approach.

Yet in the Prime Minister’s speech last month, directly-elected mayors did not receive the same amount of emphasis. The PM stressed that this time there was no “one-size fits all” approach and devolution on specific policy areas such as for buses is potentially on the table.

However, strong local leadership with good accountability is still essential for devolution deals. For ambitious places that want a comprehensive suite of powers and funding from their county deal, a directly-elected mayor will therefore remain the single best way of demonstrating this.

Not only will Government look favourably on mayors, but they also give places the capacity and strategic direction that they need. If combined with county deals that match economic geographies, these new mayors will ensure the rest of England gains the influence and voice that the metro mayors already have.

That said, mayor as a term has distinctly urban connotations. For the new county deals in England, it may be appropriate to return to a very old English word – sheriff. While maybe today first associated with the United States, the word sheriff emerges from “shire reeve” which referred to the chief magistrate of counties in medieval England. “High sheriffs” could continue to refer to the ceremonial office much as “lord mayors” do today, while sheriffs could refer to the same office as mayors in the shires.

The other recommendations which Centre for Cities has set out would require a more complete reorganisation of local government, especially when it comes to fiscal devolution. Central and local government should try to pursue these where they can, but a deal approach to these topics will prevent comprehensive, national solutions. Other kinds of economic powers should be done at the level of economic geography too, such as skills policy.

However, the planning reforms that the Government is currently undertaking present a particularly opportune moment for reform. Currently, a problem with the existing system is its fragmentation across numerous district councils, especially in the counties, which makes it difficult to plan strategically at the level of economic geography. Mechanisms to solve this such as the “duty to co-operate” have struggled.

The new county deals are a chance for councils to ask government to transfer the changing planning powers up from the district level towards this new, strategic geography of their own creation. This should not copy the London, combined authority, or Oxfordshire Housing Deal models where lower councils continue to wield vetoes to block new homes. Elected mayors (or sheriffs) would be responsible for housing and planning across their county, and draw up and deliver the local plans of the new planning system.

The politics of this is challenging for local authorities. But it would help reduce the pressure that planning and housing puts on each individual council, and has the potential to unlock other benefits in the county deals. Central government should acknowledge the local leadership that such a request would require, and provide generous support in any such county deals to make them work. Such a move would directly connect the levelling up and the planning reform agendas, and leave a permanent legacy of improved governance and prosperity.

Why levelling up requires planning reform

North of Tyne West of England