As we all know, Coronavirus has very much constrained where we can go and what we can do. Behaviour changed substantially after the Prime Minister’s call for people to practise social distancing, especially in London and other large cities.

Our blog earlier this week showed how workers responded to the unfolding coronavirus crisis – those who work in city centres started to change their behaviour before official advice, and the scale and the pace of the response were the biggest in London and large cities. But what about those travelling into city centres on Saturdays?

Visits to the city centre have fallen substantially

Figure 1 below shows the share of all ‘users’ of a city that were in the city centre, averaged across all of Britain’s cities and large towns for every Saturday between Saturday 15 February and Saturday 21 March. This usually averages around 21 per cent – so slightly more than a fifth go into the city centre on a ‘normal’ Saturday.

Looking at Saturday 7 March and at Saturday 14 March, this fell by two percentage points suggesting a marginal change in behaviour. While there had not been any official advice at this stage, mass events, including sports fixtures, were being voluntarily cancelled. But these cancellations do not appear to have had a big impact on people’s behaviour.

By Saturday 21 March, however, this fell to around half its ‘normal’ level, some 10 per cent. This suggests that people did respond to the Prime Minister’s calls for people to reduce their movement on Monday 16  March (albeit perhaps not as much as had been desired).

Figure 1: Share of all users of a city in the city centre – city average 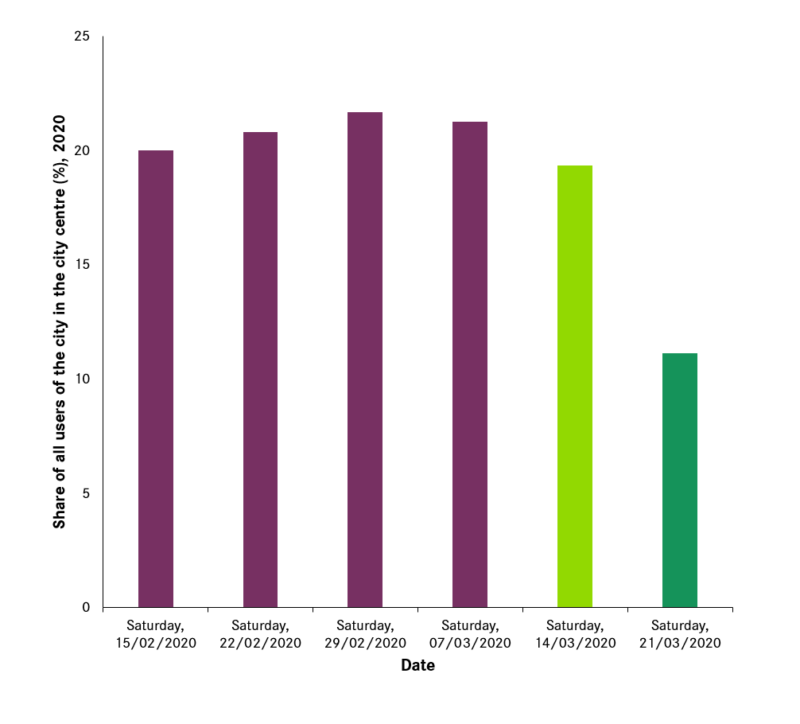 London and the largest cities saw the biggest fall

Figure 2 breaks down the city average and puts the cities and large towns into four different groups based on their size – small, medium, large and London. Immediately, it is clear that what is ‘normal’ and how the behaviour changed varied across the groups of cities. The scale of the change was the biggest in London and large cities.

In London, the share of all users of a city that are in the city centre on a Saturday is usually around 14 per cent. In medium and large cities it is roughly 18 and 19 per cent. For small cities, this figure is as high as 26 per cent.

Between Saturday 7 of March and Saturday 14 March, this fell by two percentage points across all groups except London where it reduced by four percentage points suggesting that behaviour change was sharper in London than elsewhere.

By Saturday 21 March, this share had fallen to roughly a third of the usual level in London and large cities, to 4 per cent and 7 per cent respectively. In medium-sized cities, it had fallen by a half to 9 per cent. In small cities, it was nearly two-thirds of the normal level, at 16 per cent.

Figure 2: Share of all users of a city in the city centre – by city size 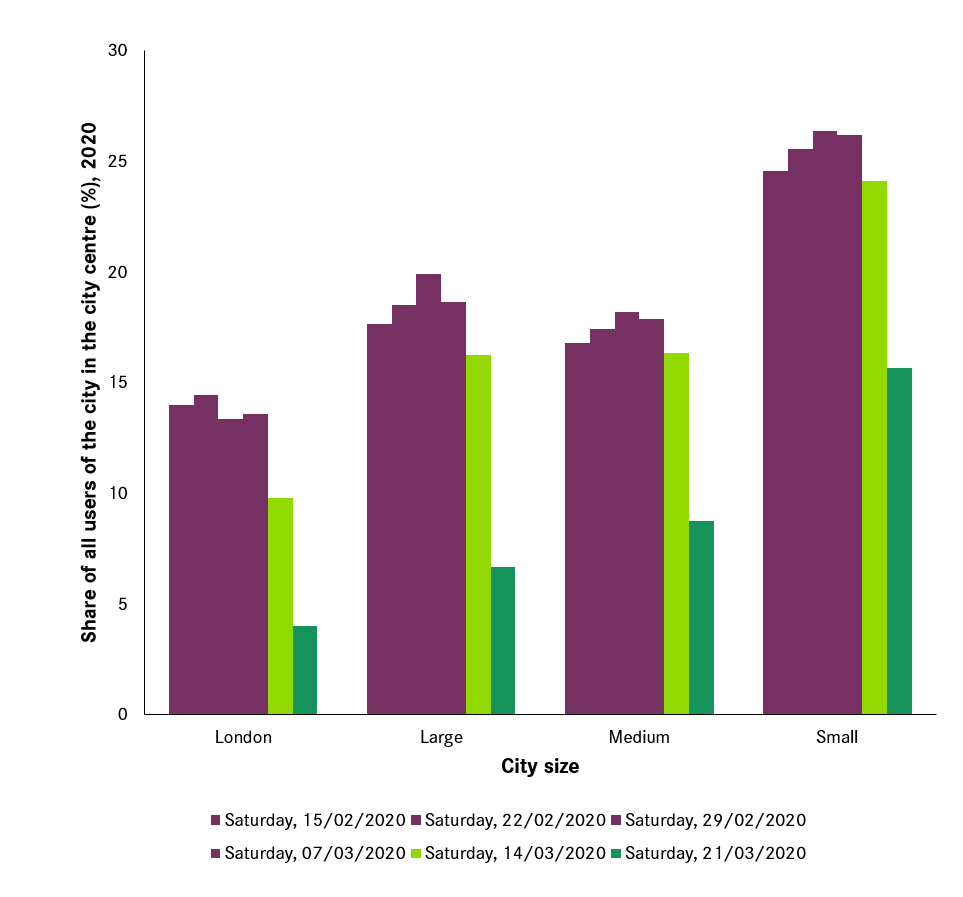 This fall is most noticeable in Manchester, where it fell to just over a quarter of the normal level. It was lowest in Basildon where the share of users coming in on a Saturday stayed at around 95 per cent of its normal value. The full city-by-city breakdown can be seen in Figure 3.

Figure 3: Share of all users of a city in the city centre – by city 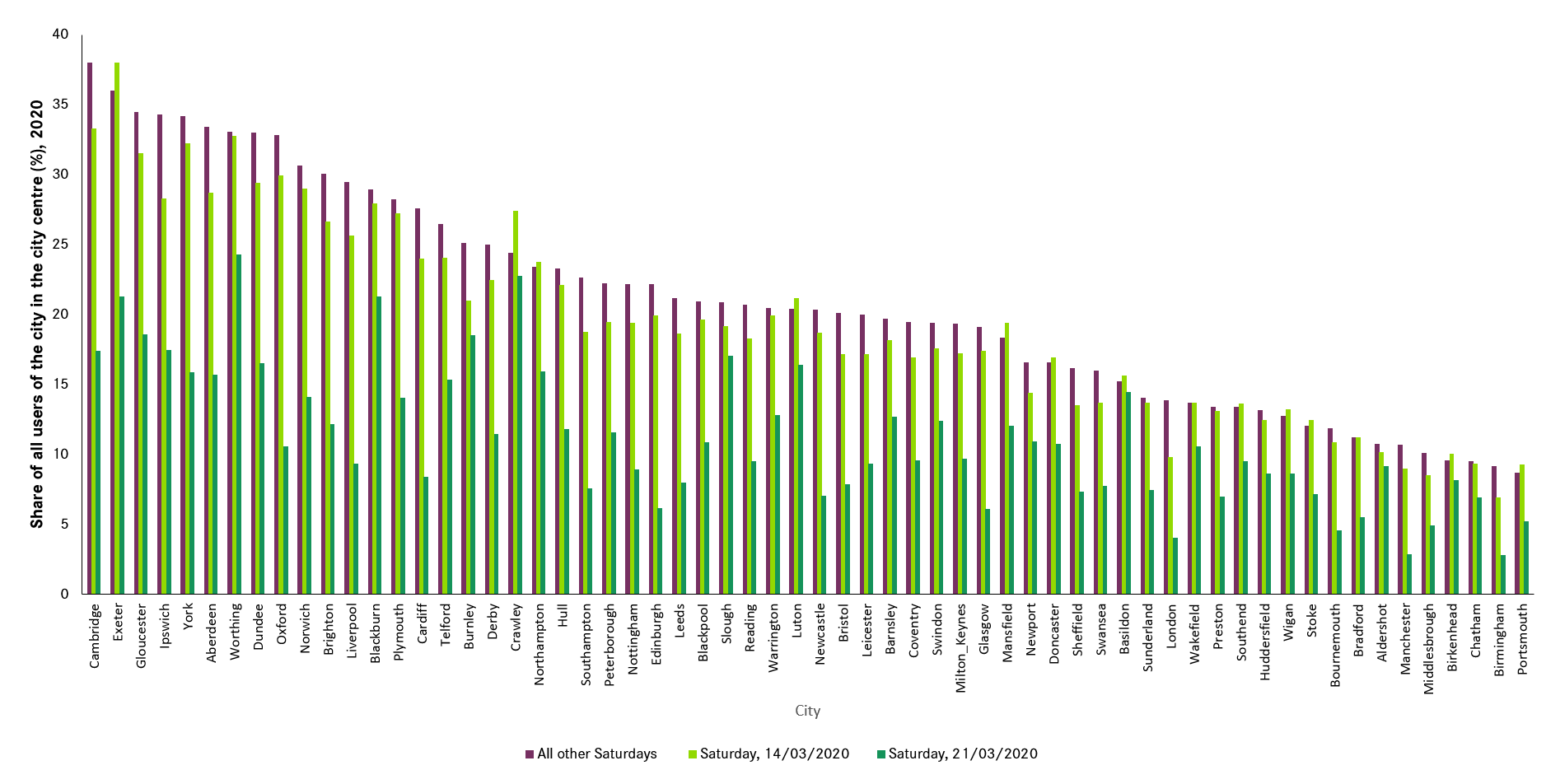 How quickly did people respond to the coronavirus?

The share of city users coming into the city centre fell on average by 47 per cent but it was not the same across the groups. The biggest falls, as we might expect were in the groups that live outside the city centre – the suburban residents and those who live outside the city. On average, suburban resident visits fell by 44 per cent and non-resident visits dropped by 59 per cent. 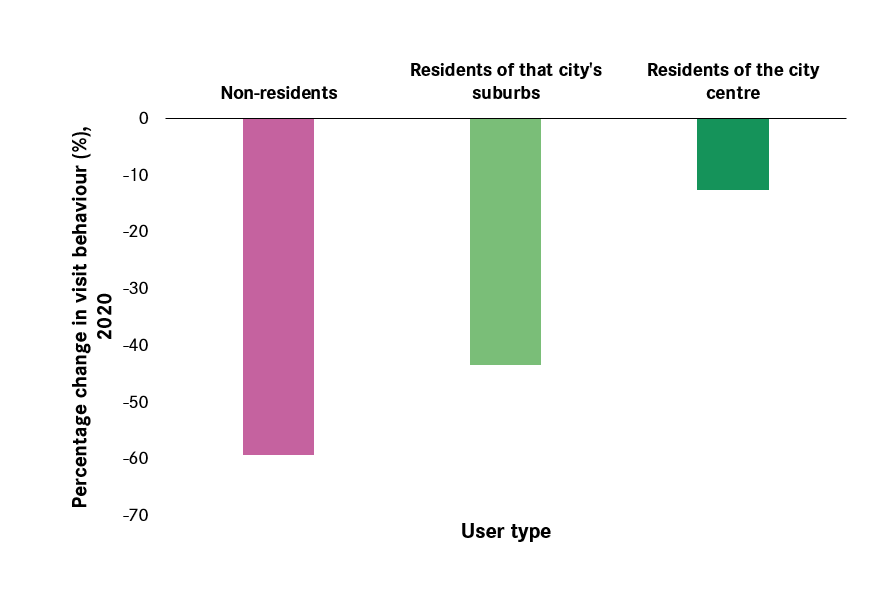 Figure 5 breaks this down further, based on the city size. This reveals that the same broad pattern can be seen across cities and large towns of different sizes albeit to different degrees. The falls were most dramatic in London and the large cities and less so in others. 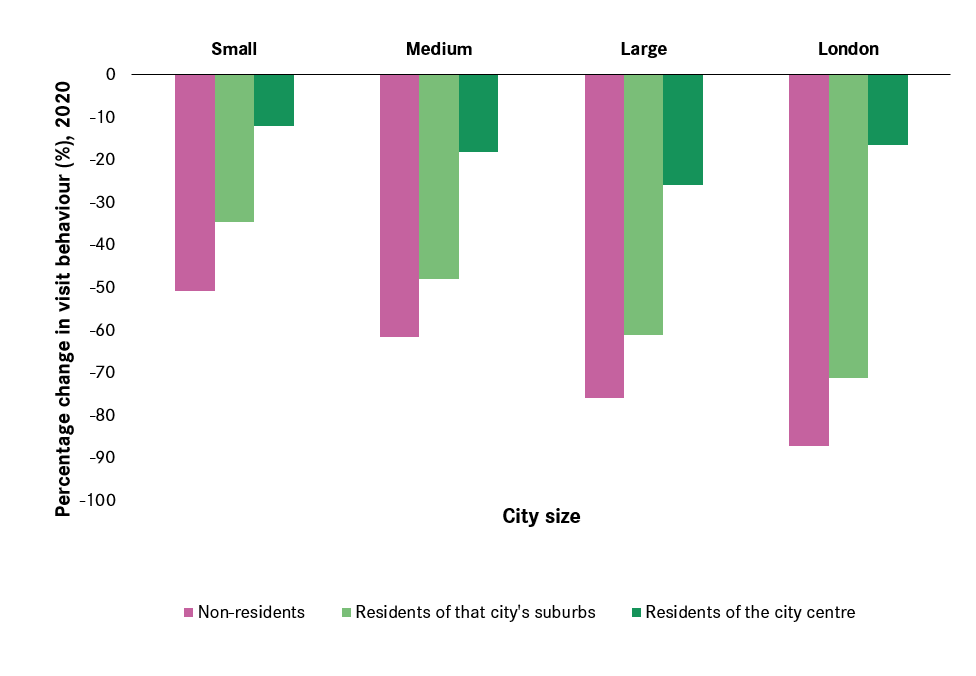 There are two things to learn from this. Firstly, the high street appears to have been affected by the pandemic for some time before the lockdown was introduced on 23 March, effectively elongating the impact on these businesses. And, secondly, people did respond to official advice on reducing travel. While the press extensively covered the increase in people using local parks or going to Snowdonia on the weekend of 21 and 22 March, there was a sharp fall in people going into city centres.

Coronavirus Future of cities Levelling up The Future of Work
How are city leaders supporting the recovery of their local labour markets?

Coronavirus Devolution Mayors
How New York, Salvador and Berlin have dealt with the Covid crisis