Pressure has been mounting for the Government to outline an exit strategy given the clear economic, mental health and social impacts of the policy.

Potential strategies that have been suggested include easing the lockdown for targeted groups based on age, industry and geographical location. How would these strategies play out across the country?

One option that has been explored in this paper by the University of Warwick is to release young people first. The idea being that this would help to restart the economy with a relatively low public health risk. Looking across a range of measures suggests that, from the perspective of the economy, this would have a similar effect across the country, but for different reasons.

On one hand, if we look at where young people live, they are more likely to be in cities and especially university-towns. In urban areas, 16.6 per cent of the population are aged between 20 and 30, in non-urban areas this figure is 12 per cent. There is little other pattern to how this group is located geographically.

Age alone only tells part of the story. Having more young people might not necessarily mean a bigger impact on the economy if these young people live at home with their parents and so are unable to return to work. Figures for this vary between places – Sunderland has the highest share of households with young adults living at home at 12.9 per cent, yet in Cambridge, this level is almost half at 6.6 per cent.

It is also important not to forget that a chunk of young people – up and down the country – might not have a job to commute to. Those aged under 30 are more likely to work in local services jobs such as shops, cafes and restaurants. For example, a third of jobs in arts and entertainment are done by those younger than 30, while it’s 43 per cent in accommodation and food services. The share of young people working in these two local services sectors, as well as retail, is high across the country as shown in Figure 1. This is the case even in cities with relatively low shares working in these sectors such as Barnsley which has the smallest share at 34.1 per cent. The economic impact of releasing young people will be minimised as the lockdown keeps the number of customers for such services down.

The industries in which work must be done outside of the home and where the benefit of a return to work would be the most beneficial are manufacturing and construction. These two industries employ a smaller share of young people. In England and Wales, 17.2 per cent of those working in manufacturing are less than 30 and this figure is 22 per cent for the construction industry.

Allowing the young to return to work would be beneficial for both the wellbeing of individuals and the wider economy across the country, however, this latter effect should not be overstated.

Option 2: Trialling a total lift of the lockdown

Another method suggested in an open letter to the government by 34 epidemiologists is to trial lifting the lockdown in one or two cities. To ensure the results of this trial can be applied across the country, the chosen city should be one that is the most representative of the UK. Also, for feasibility reasons, the population of this trial-city should be between 200,000 and 300,000.

Looking at factors that would affect the spread of COVID-19, Derby is the city that is most like the urban average and so would be best placed to host a trial. This result was derived by looking across a basket of measures – households with young adults living at home, size of older and younger populations, life expectancy, ability to work from home and type of commute. As shown in Figure 1, Derby is followed by Plymouth, Northampton, Peterborough and Chatham in terms of how representative a place is. 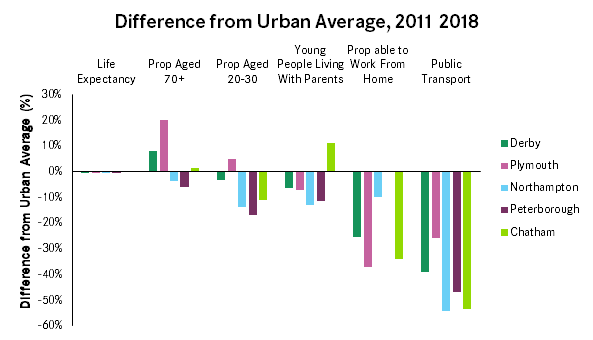 Although Derby is average when looking at these factors, it is also important to remember its economic profile is not so average. Our recent research highlighted it as one of the cities in which jobs are most vulnerable to the effects of the lockdown. The question is whether companies like Rolls Royce will be able to restart operations as a result of the lockdown being lifted even if a portion of its workforce is allowed to return to work.

Included here are only two of the exit strategies that have been proposed. As the situation progresses we hope to update this analysis, looking at further strategies as they are put forward.