European nationals who want to continue to live in the UK after Brexit have until the end of June to apply for the EU Settlement Scheme. Alongside creating additional work for the Home Office, the Scheme is also a unique opportunity to finally fully understand the extent of European migration to the UK.

Here are three findings from what the data tells us about cities and large towns:

As of the end of December 2020, with six more months to go before the deadline, it is already evident that the number of EU nationals in the UK in recent years has been dramatically underestimated. So far, approximately 4.8 million people have applied to the EU Settlement Scheme, 1.3 million more than population estimates from the Office for National Statistics suggests (see Figure 1).

Figure 1: EU population estimates versus applications for the EU Settlement Scheme in the UK 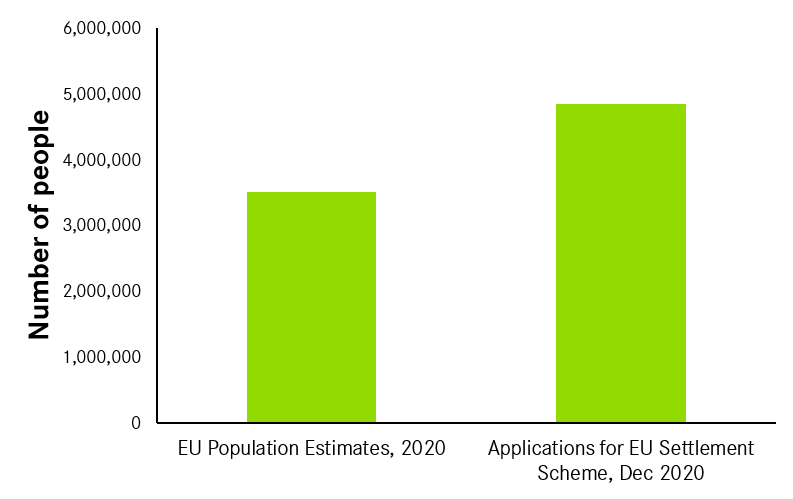 Cambridge, Worthing and Leeds are the cities and large towns where the number of EU migrants has been underestimated the most

The underestimation is a feature consistent across the country.

Of the 63 largest cities and towns, only six currently have fewer applications than estimated EU residents. In five out of six cases, the difference is smaller than 15 per cent, meaning it might close by the deadline in June.

Figure 2: The top 10 places with the largest difference between applications to the EU Settlement Scheme and population estimates

And there appear to be no common theme between under or over estimation of EU nationals and places’ characteristics: no particular North/South divide, nor city-size divide or industrial-make up divide.

There is a clear North/South pattern in applications

Where there is a clear North/South pattern instead is in the number of applications for the EU Settlement Scheme as a share of the population of a place.

When looking at this indicator, the data on the application to the Scheme is very much in line with what we previously knew about EU citizens: they tend to cluster in urban areas, and in particular in cities and large towns in the Greater South East of England (see Figure 3). In Cambridge, Peterborough and Slough EU applicants to the Scheme account for approximately 20 per cent of the population. That is 10 times as many as in Sunderland, Birkenhead and Middlesbrough where they account for less than 2 per cent of the population.

This is likely to be related to the distribution of job opportunities across the country, with more vibrant labour markets being more attractive places not just for UK nationals but for EU migrants too.

Figure 3: Applications for the EU Settlement Scheme as a share of the population 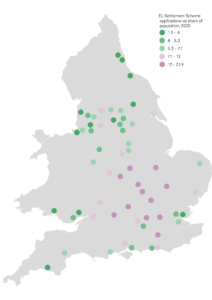 While there are still a few months to go to the final deadline for applications, the emerging situation is clear: there are even more EU nationals than what was initially anticipated. These migrants have already ensured their right to stay – we now have to wait and see how the new immigration rules will affect migrations from the EU in the future.