From the perspective of the high street, the introduction of the Government’s plan B on Covid-19 restrictions couldn’t have come at a worse time. Christmas is a big part of the calendar for all city and town centres. But which cities and town centres are most exposed?

Consumer spending data for 2019 shows that December was the most important time of the year for high streets in all but one city and large town centres (Edinburgh is the exception, where retail sales peaked in August with the Fringe Festival). On average across all 62 city centres, sales in December were 138 per cent of sales in the average month in 2019, as shown in Figure 1.

Figure 1: December is by far the most lucrative month of the year 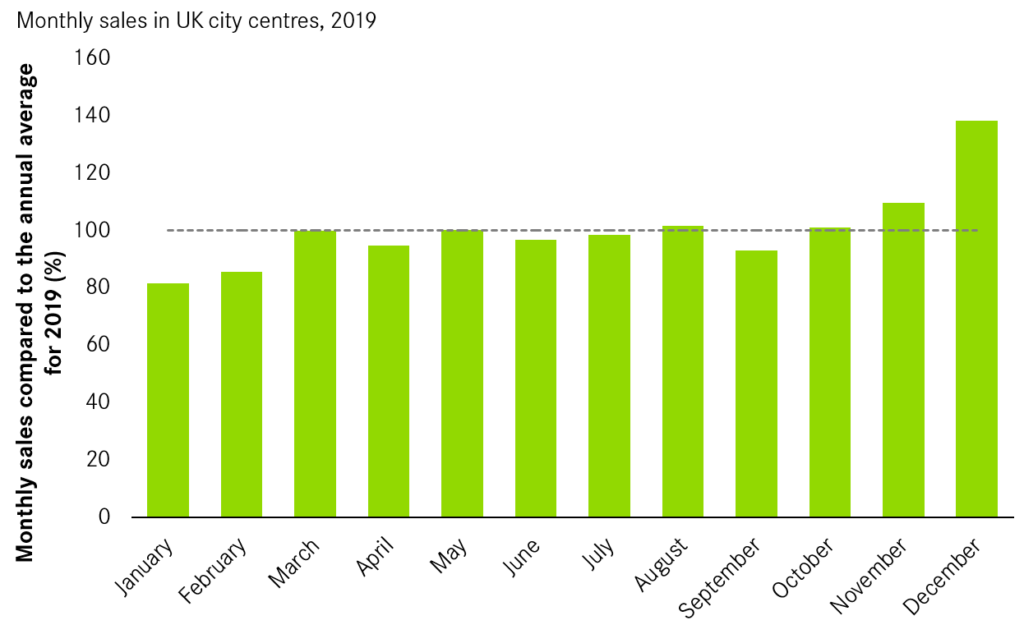 But the Christmas boost is not the same everywhere

Some places are much more reliant on a Christmas boost than others. Middlesbrough is the capital of Christmas shopping. In December 2019, retail sales were 81 per cent higher than the average for that year. Glasgow and Milton Keynes were not far behind (64 per cent and 63 per cent respectively)

In London, Christmas plays a much more muted role. Sales in December 2019 were just above the average for the whole year. It still is the most important month in terms of sales, but there is less variation between seasons.

Table 1: Christmas sales vs rest of the year: Top 10 and Bottom 10 cities and large towns

These patterns are driven by the make up of spend across different high streets. This boost in sales over Christmas is most important for two sectors: fashion and general retail. In December 2019, general retail sales (in stores like bookshops, gift shops or department stores) were nearly double the average for the year. Fashion is also very reliant on the run-up to Christmas (about 60 per cent higher than the rest of the year).

Spend in Middlesbrough is most reliant on these two sectors, with over half of all sales happening in them. Bradford, Stoke and Milton Keynes are not far behind. In London, Slough Edinburgh and Aldershot, at most £1 in £5 is spent in these sectors. In London and Edinburgh in particular, this is likely to be the result of international tourism boosting spend on sectors like accommodation and food and drink at other periods through the year.

This week the hospitality sector has been very vocal about the impact of cancelled Christmas bookings. There’s no doubting that the new guidance is likely to hurt trade. But they aren’t the most exposed. The data shows that a steady stream of business throughout the year makes Christmas relatively less important than is the case for fashion and general retail. If the new guidance does impact people’s shopping behaviour, it is businesses in these two sectors that are most likely to be in trouble come January.

The high street has dealt with the impact of previous lockdowns with the help of an array of government support, including grants, the furlough scheme and business rates holidays. While the latter is still partially in place, high street businesses will likely find themselves even more exposed to the impact of Covid-19 this Christmas than last. The question now is whether the Chancellor will reintroduce sector-specific furlough or other support to once again shelter them from the impact of restrictions, even if there isn’t any formal order to close their doors this time around. Businesses in the centre of Middlesbrough, Glasgow and Milton Keynes, in particular, will be hoping that he will.

Cities Outlook, which will be out at the end of January, will look more closely at the impact of the pandemic on high streets. Click here to register your spot at the launch.