With forced temporary closures, travel restrictions and social distancing guidelines, retail and hospitality businesses on our high streets have been through a very tough two years. This year’s edition of Cities Outlook, Centre for Cities’ annual health check of the largest cities and towns in the UK, looks at the data behind the storm that hit high streets in large town and city centres. How has this played out between different places, and what does it tell us about the future of the Great British High street?

While the pandemic hit all high streets up and down the country, it has hit some far harder than others. City centres that were thriving pre-pandemic, such as London, Edinburgh and Oxford, have lost the most weeks of sales (see Figure 1). This is because the pandemic has turned their pre-pandemic strength into an Achilles’ heel: office workers, which strong centres had more of, were advised to work from home; non-essential high street businesses, of which stronger centres had diversified into to a greater extent, were forced to close; and leisure trips, which stronger centres attracted more of, were discouraged. 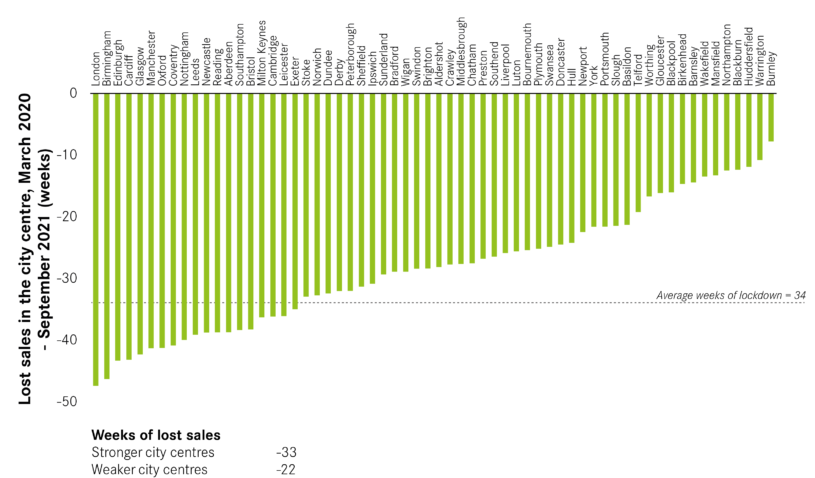 And this had a clear impact on high street vacancies

The pandemic pushed vacancy rates up nearly everywhere: across all 52 cities centres that recent data was available for, more than 2,400 units closed their doors- a 3.3 percentage point increase.

Reflecting on the data above, stronger city centres were hit harder, as lost sales directly materialised into higher increase in vacancies. Places like Oxford, Newcastle or Cambridge which before Covid-19 had relatively low numbers of empty shops on their high streets saw more closures than cities like Blackpool, Bradford or Doncaster, where the increase in vacancy rates was much more muted. In fact, quite paradoxically, in the latter group of cities fewer shops closed between March 2020 and November 2021 than in the two years that preceded the pandemic, despite trading conditions clearly being worse over the last two years than the two-year previous to the pandemic (see Figure 2).

Support has taken two broad forms – tax cuts and grants. Business rates holidays in particular have brought relief to successful places, but in part this is because many properties in weaker places are permanently exempt from rates. So the holiday brought parity between the two.

Business grants, on the other hand, appear to have been of greater benefit to weaker places. Cities like Blackpool, Wigan or Birkenhead were allocated more or the same amount of money than those in Cambridge, Manchester or Reading, despite having lower running costs and a smaller shortfall due to lost sales- which effectively meant that the support stretched further and mitigated further increases in vacancy rates.

Figure 2: In weaker city centres, the pandemic slowed down the ongoing struggles of the high street 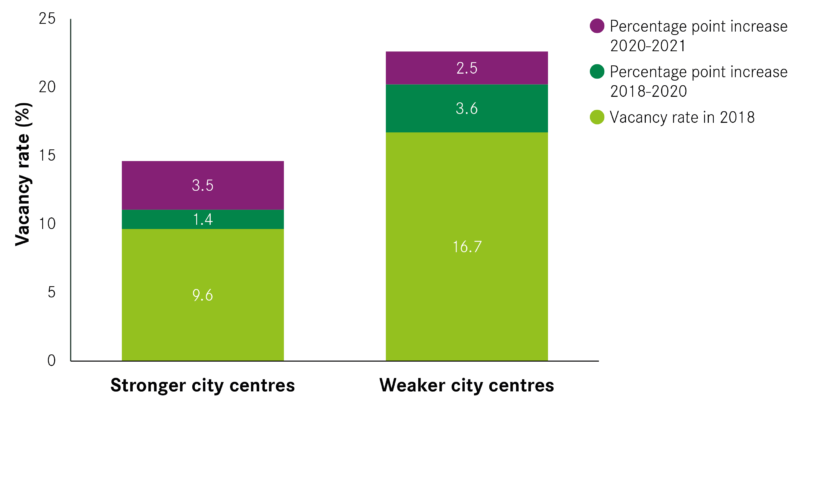 Note: This chart only contains data for cities in England and Wales (data unavailable for Scotland and Northern Ireland)

What does this mean for the future of the high street?

But while the pandemic may have ‘levelled down’ high streets, it has by no means been an equaliser. It may have left deeper marks on stronger city centres, but it hasn’t radically altered the geography of successful (and less successful) high streets: those places which had the highest number of empty units pre-pandemic are still facing the biggest challenges. Bradford, for instance, has seen virtually no change in its vacancy rate, but despite this still has one of the highest vacancy rates in the country. At the other end of the spectrum, Cambridge may have taken a bigger hit, but still ranks among the bottom 10 places with the fewest vacancies.

And if normality returns as restrictions are being lifted, then stronger city centres are likely to bounce back to a relatively strong position because the fundamentals are still there: their high streets still sit within a wide and affluent catchment area, and the large number of high-skilled jobs in the city centre mean that it is possible that we’ll see a large increase in footfall on their streets (although clearly there is still much uncertainty about whether this will actually happen).  By contrast, in weaker city centres, while the less severe impact of the pandemic is clearly good news, recovering to 2019 levels of footfall and spend is not: it would mean bouncing back to a position of relative weakness. And a bigger concern is that government support has merely delayed the pain, and the full effect of the pandemic on shop closures is yet to be felt.

Policy should do two things in response to this.

The first is to help town and city centres weather the storm in the short term. In successful city centres in particular, national and local policymakers should support initiatives to encourage workers to return if safe to do so, such as a part-time season ticket for public transport.

The second is to adapt to change, especially in weaker city centres. Policy must address the underlying economics behind the lack of consumer spending power by making the city centre a better place to do business, rather than short term cosmetic interventions. The goal of doing the former is to create high-paid jobs which then fuel demand for shops, cafes and restaurants. This needs to be a core part of the upcoming Levelling Up White Paper: levelling up high streets will need more than interventions which solely improve the physical design of the public realm towards policies which really address the fundamentals and improve the strength of the city centre economy.