Two years ago, the UK implemented the first lockdown to contain Covid. This policy forced millions of workers to work remotely and many businesses to close temporarily. This had an abrupt impact on the UK’s labour market. Even with the Coronavirus Job Retention Scheme in place, the number of people claiming unemployment-related benefits rose sharply from 1.6 million in March 2020 to 2.8 million two months later.

Now two years on, how has the labour market recovered across British cities?

The immediate pandemic effect was broadly similar across most cities

The initial Covid shock was relatively uniform across most British cities. Figure 1 shows that 39 out of the 63 cities analysed saw claimant counts rising broadly in line with the national average (± 0.5 percentage points interval) between March and May 2020. That said, there were naturally some outliers that typically share some economic features. The cities with the highest claimant count increases were those with economies dominated by aviation-reliant activities (Luton, Slough, and Crawley for example) or coastal cities (Blackpool, Bournemouth, and Brighton). University cities, such as Exeter, Oxford, and Cambridge, were among the least affected.

Figure 1: Most cities saw a claimant count rate increase similar to the national average, regardless of their initial position

This shows that the initial impact of the pandemic is weakly linked with how prosperous a city is. Instead, the specific economic base of each city – how vulnerable those sectors were to social restrictions – became more relevant.

After a long period of recovery, the recent labour market data suggests a sluggish recovery. Claimant count rates have barely changed since December, and we no longer observe a continued growth in job postings for some cities.

And, despite the observed reduction in claimant count rates in 2021, all cities still have a higher claimant rate than two years ago, even if the national unemployment rate shows a full recovery. This could be caused by workers earning less (e.g. working fewer hours) than before the pandemic or part of the jobless population became eligible for benefits after drying up their savings.

The vast majority of cities still have around 55-70 per cent of the additional claimant count linked to the shock of the pandemic. The best performing cities – in terms of converging towards their pre-pandemic position – are typically low productivity cities with a large manufacturing sector. Sunderland leads the claimant count recovery while Luton is significantly far below its pre-pandemic levels. The cities that recovered the most (Sunderland, Dundee, and Swansea) have reduced more than 80 per cent of their pandemic-induced additional claimant count.

Figure 2: Struggling cities tend to have a stronger recovery than cities in the Greater South East

Source: ONS. pandemic-induced additional claimant count is the defined as the difference in claimant count between May 2020 and March 2020 (Figure 1).

While this is good news, it should not be interpreted as levelling up the country through narrowing the employment gap across cities. Many of these labour markets were struggling with high claimant counts even before the pandemic and are essentially back to square one. Moreover, a higher claimant count than what it was pre-pandemic makes all cities more vulnerable to the rising cost of living as the value of the benefits they receive will rise less than inflation.

With the exception of a few cities – such as London and the aviation-reliant cities around the capital – there is a weak relationship between the immediate pandemic shock and respective labour market recovery (See Figure 3 below). For example, despite starting the pandemic in a relatively sheltered position, Cambridge and Oxford’s recoveries have been slow. On the other end of the spectrum, Blackpool and Basildon have been recovering strongly despite being deeply hit in the first two months of the pandemic. 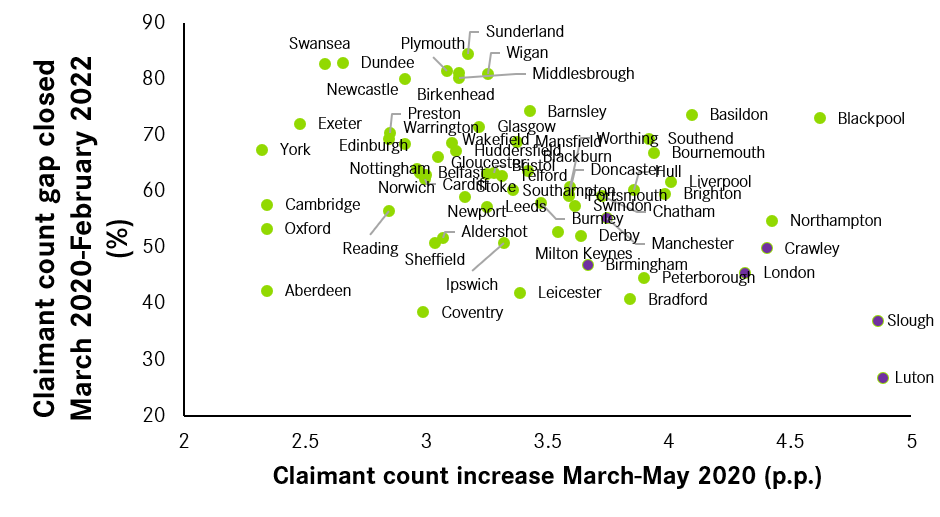 Again, the fact that there is not a clear relationship between the ‘immediate pandemic hit’ and the ongoing recovery suggests that there are other factors driving the job recovery such as city size or sectorial composition.

Ongoing working from home might be slowing the recovery

The economies where labour market recovery has been the slowest tend to be a combination of large cities and cities with a high potential rate of working from home (see Figure 4). The return of workers to their workplace is likely to be slower in these cities, which may negatively impact local services like pubs and restaurants (especially in city centres).

Figure 4: Large cities and cities where more people can work from home are broadly experiencing a slower recovery. 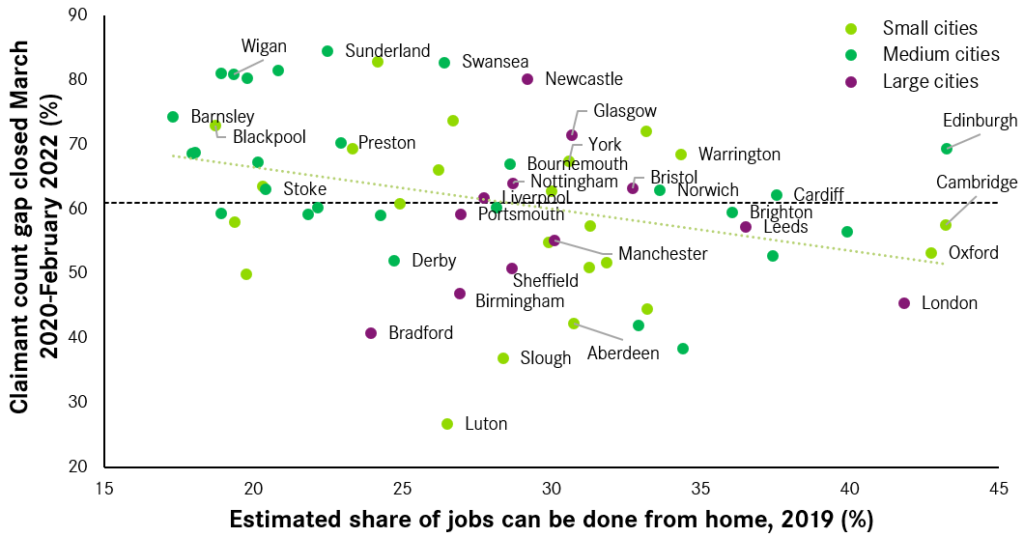 The trends observed over the last two years have implications for the Government’s Levelling Up agenda. First, London’s weak recovery shows the risks of levelling down not just for Londoners but for the country as a whole in a post-pandemic world, as a struggling London could lead to lower tax revenues to be spent in levelling up. Second, Manchester and Birmingham – the cities that Centre for Cities recognises as having the highest productivity potential – are also struggling more than the average city in reducing claimant count rates to pre-Covid levels.

The last two years have shown that the Covid recovery is far from over and it has had asymmetric effects across different cities. In order to level up the country, Government should pay special attention to the most affected cities, regardless of their region or size.

Coronavirus Future of cities High Streets
Covid – Two Years On: How has the pandemic changed the way we live, work and play in our cities?

At this event we discussed how two years of Covid-19 have changed the way we live, work and play in the UK’s largest towns and cities

Coronavirus
What policymaking lessons can we learn from the government’s Covid-19 response?

The first in a series of blogs marking two years on from Covid-19 and reflecting on what the pandemic has meant for urban economies across the UK.

Coronavirus Future of cities High Streets
How have two years of Covid-19 shaped the high street?

The second in a series of blogs marking two years on from Covid-19, focusing on what the pandemic has meant for the high streets of our largest city and town centres.

Nowhere is feeling the economic and social impact of Covid-19 more than UK’s cities and largest towns. From a public health perspective, Coronavirus has touched every part of the UK, but its economic impact will be bigger in some places than others.