Earlier in March, the Government instructed that people must stay at home for at least next three week to combat the COVID-19 pandemic. Journeys outdoors are to be limited to those required for work, purchasing essential supplies, and one form of exercise a day, with contact between different households to be reduced as much as possible.

Workers in prosperous cities are more likely to work from home

People’s economic circumstances including their income and the nature of their work will affect how easy they find it comply with these measures.

Earlier Centre for Cities research in Fig. 1, and discussed in more detail last week, shows that a larger share of people will be able to work from home in cities with more successful economies – over 40 per cent in London and Reading compared to less than 20 per cent in Wigan and Barnsley. This means the shock of the pandemic has the potential to worsen economic inequality across the country.

Figure. 1 Estimate of workers that could work from home 2018 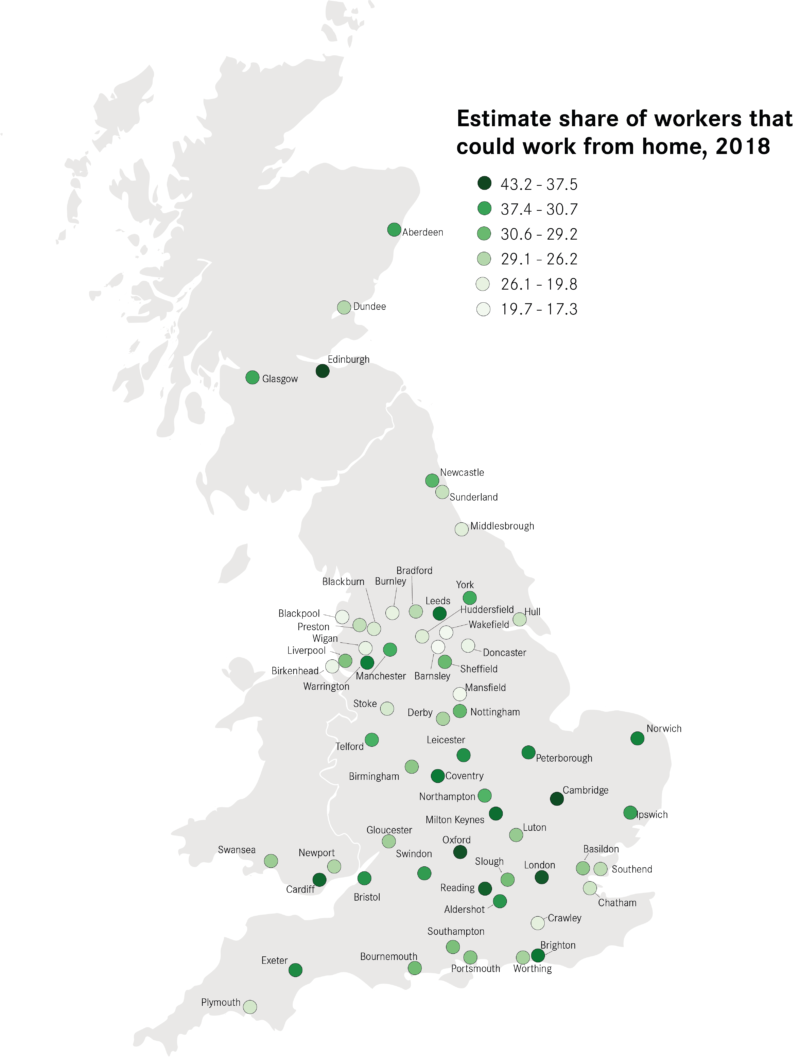 The types of work that take place in these cities are distinct, with the most prosperous urban economies more orientated around high-paid, high-skilled services which export to other cities and countries. Paradoxically, those it is easier for such jobs to temporarily be conducted from home, these jobs have a strong preference for city centre locations as they value how face-to-face communication makes it easier to share knowledge between workers and firms.

But residents of prosperous cities have less space at home

Although it is easier and more common for workers in certain cities to be able to work from home, how much space they have at home varies too.

But not all cities are the same. The map below in Fig. 2, from Centre for Cities’ report last year Making Room, shows just how much space people have between different cities. In general, cities with less affordable housing in the Greater South East such as Brighton and Oxford alongside a few cities in the Midlands like Coventry and Birmingham have less space per person, and cities with cheaper housing have more space. For instance, while the average person in London has 33.1 square metres of space, the average resident of Birkenhead has 43 square metres.

These differences across the country are widened by the shortage of housing in expensive cities, resulting in falling amounts of floorspace for people in certain cities. For example, the average resident of York saw the amount of space they have decline by 2 per cent from 2011-2018. In cities with cheaper housing though, average space has often risen – in Sunderland it has increased by 4 per cent. 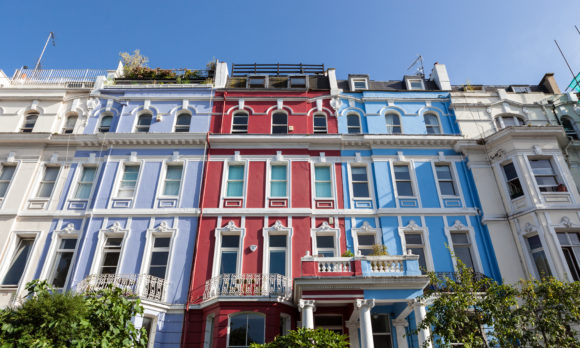 Everyone makes trade-offs between space, housing costs, and local job opportunities and amenities

Ordinarily, that people in more expensive cities have less space does not present a problem. In cities where land is more expensive, people will buy less housing to save money so they can live nearby the things they prioritise, whether that’s a strong labour market or the things they can do and buy in that particular city. Meanwhile, residents of cities with lower land values can afford to buy more space if they want or need it because local housing is cheaper.

In the middle of a pandemic though, the trade-offs between the benefits and the costs of economic success are clearer than ever. While those cities with the most productive and adaptable labour markets will be the most resilient through this crisis, those same workers will find that their housing market means the next few months will be more challenging. If they are housesharing with other adults due to failures in housing and planning policy, it may be more uncomfortable to work from home in cities like London and Oxford than in cities with less acute housing shortages, even if it is more common.

People in expensive cities are less likely to have private gardens

One of the biggest controversies of the pandemic has been around exercising and social distancing in open green spaces. Although Government advice states that exercise outdoors is allowed once a day, some councils, like Hammersmith and Fulham, have at certain points closed parks for fear that they are spreading COVID-19.

Shutting down parks and other urban open green spaces will be particularly costly for those who do not have gardens, and who rely on public green space for exercise and fresh air. Fig. 3 provides estimates of how many dwellings in cities across England and Wales are flats and thereby are less likely to have access to a private garden. This varies between cities in a pattern resembling housing affordability – while over half of households in London are flats, and 46 per cent are in Brighton, only 10 per cent are in Wigan and 8 per cent are in Burnley and Barnsley.

Although this relies on the assumption that every house which is detached, semi-detached, and terraced has a garden, this suggests that keeping parks open in London, Brighton, Bournemouth, Cambridge, and Oxford will be especially important to help people cope with social distancing.

Unrelated to affordability though is the amount of public space people have in different cities. Currently, many parks and gardens remain open, but it remains uncertain both whether this will continue or how much public space could potentially be offered to people.

By combining the data on cities’ public parks and gardens within cities in Great Britain, it is possible to calculate how much exercisable space per person cities have, shown in Fig. 4. Milton Keynes has by far the most with 47 sqm per person of parkland and gardens, while Worthing has the least with 3.4 sqm per person. Even though large parts of their area are built up, big cities often do have lots of space available for residents in their public green areas – London has 15.1 sqm per person, while Liverpool has 16.9 sqm.

In some cities with very low amounts of parkland per person, cities might need to step in and help provide more space, such as in Worthing, which has just 3.9 square metres of parkland per person. Rosamund Urwin has suggested that golf courses be opened up to the public – in a city like Worthing, golf courses alone would provide 17.9 square metres of open space per person. That Worthing is a place where a high proportion – 35 per cent – of homes are flats may require the city and similar places like Brighton and Slough to act.

All together, this shows that although there are people in every city who simply do not have any outdoors space of their own, parks should be able to provide enough space for everyone to exercise safely and while maintaining social distancing. In some cities this is currently far less, but local leadership pf these cities that responds to local conditions can help ensure that people can continue to exercise and stay healthy.

Thanks to Tom Sells for producing the interactive maps and doing the analysis of public green space.

Coronavirus High Streets
Eat out to help out: Why cities give you the most choice

The scale and density of cities means that they offer more choice - not just for work but also play.

Some commentators have suggested that Covid will do in a couple of months what governments have tried to do for the last 80 years. This is very unlikely.

Coronavirus
Coronavirus High Streets
Eat out to help out: Why cities give you the most choice

Coronavirus Future of cities Levelling up The Future of Work
How are city leaders supporting the recovery of their local labour markets?

Coronavirus Devolution Mayors
How New York, Salvador and Berlin have dealt with the Covid crisis