Today Boris Johnson dismissed suggestions the UK would go into a national lockdown. Local restrictions are now said to be the most appropriate response to localised Covid-19 hotspots and are likely become increasingly common – with the North East being the latest area to face additional restrictions.

In order to evaluate the impact of these measures on city centre footfall, and by extension on high streets and local economies, we have analysed footfall data in three city centres: Leicester, Manchester and Aberdeen, all of which have experienced restrictions over the summer.

Perhaps unsurprisingly, data shows that their effect very much depends on the severity of the measures introduced and their purpose.

The stricter the lockdown, the larger the impact

Leicester was the first city in the UK to experience a local lockdown, at the end of June. The measures were quite strict: non-essential shops and schools were closed, and the loosening of restrictions for pubs and restaurants – which took place only a few days later in the rest of the country – did not happen. The impact of the lockdown was clear (Figure 1): while footfall was rising up until the day before it was introduced, activity then fell sharply after. Data on offline spend from our High Street Recovery Tracker also confirms that the restrictions caused a substantial loss of income for local businesses in the city centre throughout the lockdown period.

In Aberdeen, the impact was similar. The lockdown was also quite strict – similar to the one introduced in Leicester. As shown in Figure 1, footfall dropped significantly shortly after the measure was introduced: while footfall had reached almost 70 per cent recovery (compared to pre-lockdown levels) at the end of July, it fell below 50 per cent in the first two weeks of August. Previous analysis from the Centre for Cities has also shown that Aberdeen is the only city which did not see an increase in visitor footfall on Eat Out To Help Out evenings.

But in Greater Manchester, the purpose of the lockdown was different; it was designed to prevent people mixing in houses rather than shutting down economic activity in the city. Non-essential shops remained opened, and so did pubs and restaurants. As a result, the restrictions had less of an impact on city centre footfall, although data shows that the upward trend Manchester experienced in July slowed down when restrictions came in (Figure 1). 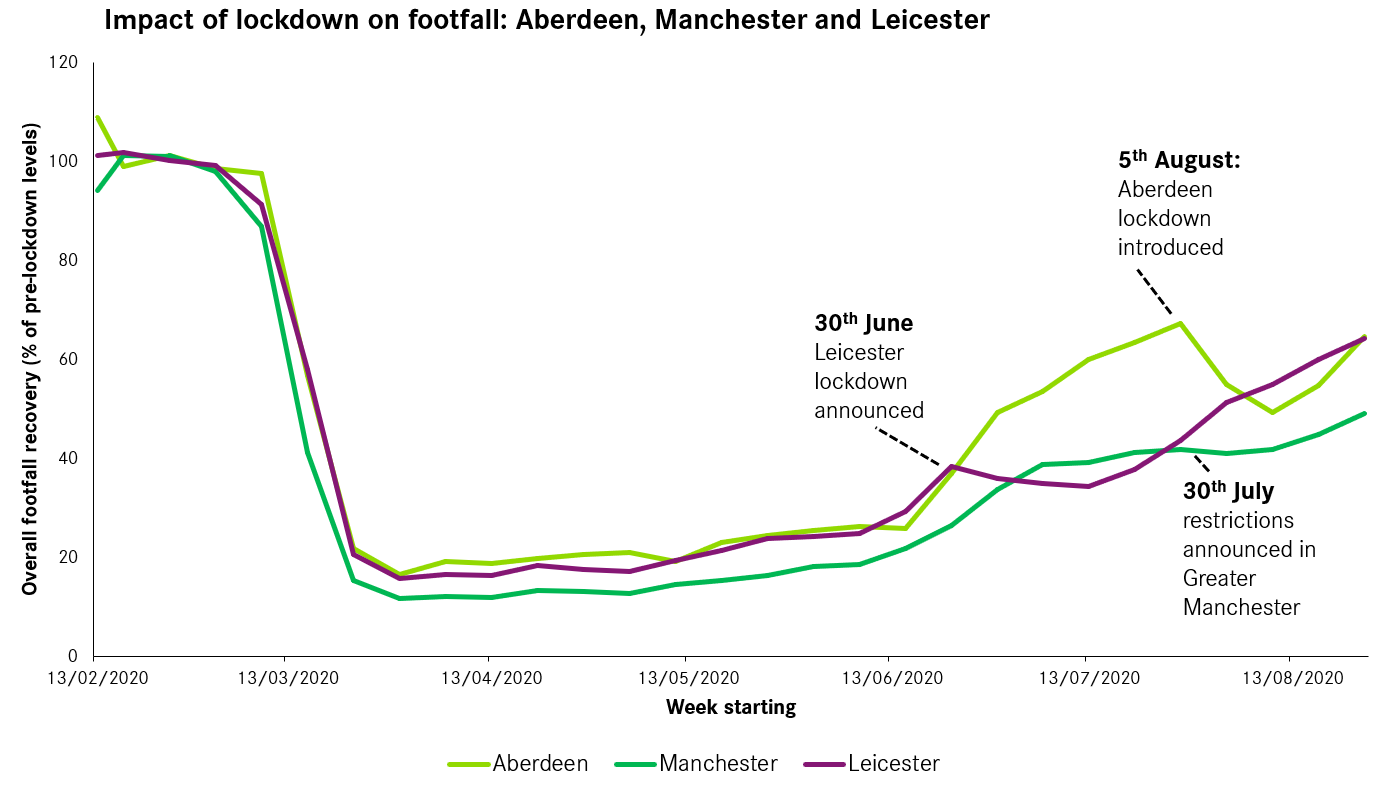 Did activity resume as soon as restrictions were lifted?

Yes, but loosening restrictions is not like popping a champagne cork. Figure 1 shows that in all three cities, activity started picking up again after restrictions were lifted (although they haven’t been fully lifted yet in all places). But although it is quite reassuring news that all three places have caught up footfall and are now closer to their pre-lockdown levels, the process took a long time. In Leicester, for instance, footfall only started to creep up again mid-July, but only got back to normal two weeks later. In Aberdeen four weeks have elapsed before activity resumed, and Manchester city centre footfall only started to properly increase again mid-August.

Regardless of the type of lockdown introduced, all restrictions are likely to have generated a substantial loss of income for local businesses in these areas, which might have been the breaking point for a number of businesses already struggling since March.

The new restrictions announced in the North East are likely to hamper the recovery on their high streets. If local lockdowns are to be used in other areas in the next few months, it is crucial that the government sets out how it will support jobs and people, especially in the retail and hospitality sectors, when they are not forced to shut, for as long as restrictions have to be in place.