The last year has had a devastating effect on Britain’s high streets. Shops have stayed closed for months, and even as the first lockdown was lifted, footfall in many city centres struggled to recover to anything near pre-pandemic levels. And spending online has accelerated.

These upheavals came at a time when high streets were already considered to declining. Some reports before the pandemic hit even estimated that almost 300,000 high street jobs were lost in the last decade, and gave a grim outlook for the next one.

But looking at the most recent Centre for Cities research, published in partnership with HSBC UK, on job creation in city centres in England and Wales, it seems that not all high streets shared the same destiny. 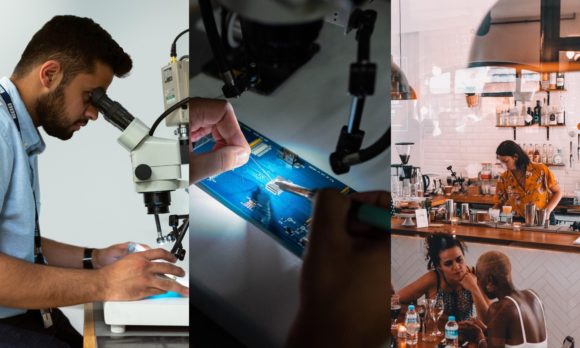 Quite the contrary; some city centres actually experienced a massive boost in high street jobs[1] over the years leading up to the pandemic, as shown in Figure 1. Of 58 cities, 37 saw an increase of high street jobs, led by Manchester, Newport and Bradford, which all saw their high street jobs increase by around 30 per cent.

In general, it was the centres of large cities that were thriving, with nine of the ten largest English and Welsh cities ranking in the top quarter of the highest growth in high street jobs. In contrast, places like Portsmouth, Aldershot and Basildon at the bottom of the figure saw their high street jobs fall by at least 14 per cent.

So, what explains the huge difference in outcomes between different city centres? One factor that could explain things is the industrial profile these cities had at the beginning of the period. Figure 2 shows that high streets with more office workers created more jobs.[2] In 2013, around 60 per cent of city centre jobs in Manchester, London and Bristol were office jobs, and in these places the number of high street jobs increased by at least 20 per cent up until the pandemic hit. In contrast Basildon, which saw the largest drop in high street jobs, was also the city with the smallest share of office jobs in its centre. 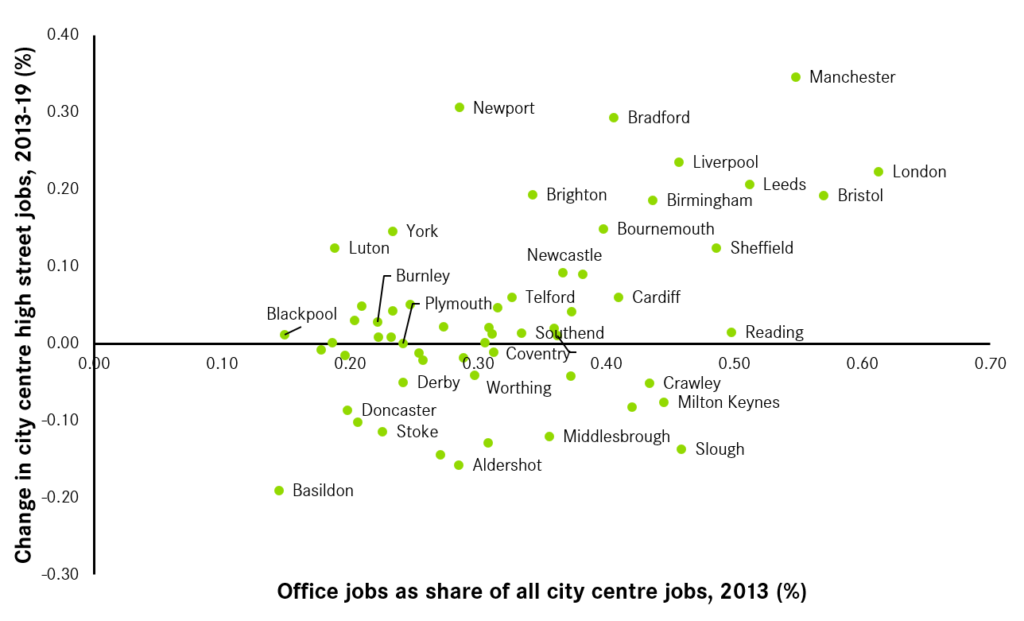 These office workers give a core number of people for high street businesses to sell to. Even running errands during their lunch break or a quick stop at Marks and Spencer after work adds up to create important demand for local services in the high street.

This has two implications for the future of high streets. Firstly, those city centres that were successful running up to the pandemic need to encourage workers back when safe to do so. This should include a campaign to get people back on public transport again, and Government-led encouragement for workers to return to the office where appropriate.

Further work on job creation in British cities can be found in the report Building back better How to recover from Covid-19.

Centre for Cities tracks the recovery of high streets in Britain's cities and large towns from the Coronavirus pandemic.

Almost 10 million new jobs will need to be generated to recover from the pandemic, making job creation the most pressing policy challenge we face in the immediate future.