Since Centre for Cities launched the High Street Recovery Tracker back in June 2020 to monitor the recovery of the 63 largest city centres in the UK, a consistent pattern has emerged: the largest cities have been the most affected by the drop-off in activity on the high street; and footfall bounced back more rapidly in smaller cities. This patterns still holds true to date, nearly five months after the reopening of the economy on Freedom Day. A number of reasons could explain this- from the length of the commutes to the fact that larger cities tend to have a higher proportion of office jobs which can be done remotely.

In that context, it has often been assumed that businesses in local town centres are doing well because people are spending more time closer to where they live. Is that really the case? We compared footfall data in Birmingham city centre to eight surrounding town centres in the West Midlands region to find out.

In Birmingham, the post Freedom Day boost has been more sluggish

Time series analysis shows that Birmingham’s footfall levels have consistently been lower than other smaller local centres like Willenhall or Brierley Hill.

All have experienced a ‘Freedom Day boost’ after the economy fully reopened earlier in the summer. But in Birmingham, the loosening of restrictions was not like releasing a champagne cork: footfall in the city centre only grew by 5 percentage points between July and August, while West Bromwich and Wolverhampton saw their activity jump by respectively 13 and 10 percentage points on the same period.

These trends were even more pronounced when looking at weekend and night-time activity: West Bromwich experienced a 35-percentage point increase in just a month (between July and August) on weekends, against 7 in Birmingham; while Wolverhampton and Willenhall saw their night-time footfall jump to nearly above their pre-pandemic levels.

By the end of the summer, the footfall levels in Birmingham city centre were still at 55 per cent of their pre-pandemic levels, while they were (with the exception of Smethwick) above 70 per cent in all other local centres we looked at. In Brierley Hill, for instance (which hosts the Merry Hill shopping centre), activity was just 10 per cent below the pre-pandemic baseline. 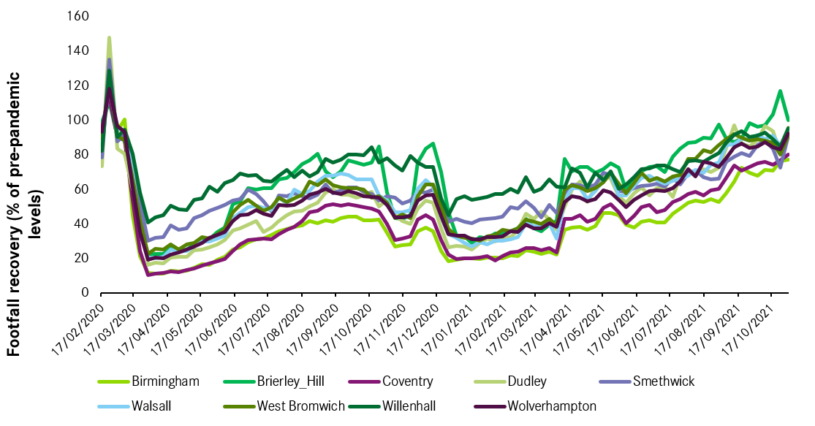 The balance slowly shifted as summer came to an end.  Birmingham city experienced the largest boost in activity when summer ended, although it was still behind all other local centres in terms of overall recovery (Table 1). But the jump- from 55 per cent to 73 per cent of pre-pandemic levels corresponds to an 18-percentage point increase, much higher than in Brierley Hill or West Bromwich (Table 1)

Part of this could be explained by the role these different city and local town centres play in the economy. In Birmingham city centre, much of the activity is driven by weekday footfall, not weekend. With more workers returning to their workplace in September (echoed in the weekday index of our High Street Recovery Tracker), activity in city centres like Birmingham and Coventry (where the increase can also be attributed to students returning as term starts) went up. This contrasts to places like Brierley Hill where weekend trade plays a bigger role.

But these trends have not persisted in October

Although footfall still crept up everywhere, the recovery slowed down during October, especially (but not only) in Birmingham city centre (Table 1). This is a sign that the return of workers was more muted last month. This is again in line with the findings from the High Street Recovery Tracker, which shows that in central Birmingham, weekday, daytime footfall only went up by four percentage point (and by two percentage points across the UK’s 63 largest city centres).

As shoppers were keener to return to the shops than workers to their desks, the contrast with local centres in the region is clear again: in a number of them activity went up again, especially on weekends (Table 2) and the overall footfall is approaching is pre-pandemic levels- or has reached it already, like in Brierley Hill.

Table 1: Overall footfall recovery across the West Midlands since August

So, have local high streets experienced a boost, and what does that mean for their future?

While the past eighteen months have shown that predicting the future is hard, data so far shows that the ‘local high street boost’ claim should be nuanced. Although most local centres bounced back quicker than central Birmingham, only one so far has fully returned to its pre-pandemic levels.

Some of them like Walsall and West Bromwich are still 10 per cent down, and this hasn’t changed since September. And in most of them, it is weekend activity, not weekday lunchtime shopping which is driving the trend. This suggests that even though many office workers are still working from home, they are not visiting their local town centres as much as we may have expected, and overall visits to local town centres are still lower than what they were back in February 2020.

The next update will tell us what happened in November- whether more workers returned, and what the impact of Black Friday was on high streets.  But it is important to keep in mind that this is a relative recovery: while return to previous levels of footfall in places like Wolverhampton or Walsall would be good news, they are bouncing back to a relatively weak position which is likely to have been further weakened by the pandemic- especially now that furlough has come to an end. If revitalising high streets in some parts of the country is still seen as a core part of the levelling up agenda, then the vicious circle between low wages, low demand for local businesses and high vacancy rates now need to be addressed – and higher footfall is only the first step.