The latest update of the Centre for Cities Unemployment Tracker, which includes data regarding the claimant count, Job Retention Scheme, and job postings from Indeed.com, provides an overview of how the UK’s urban areas have continued to recover over the summer months. For many places the Summer has brought good news, but for some the end of the furlough scheme at the end of this month looms large.

With the furlough scheme due to end on 30 September, the number of workers on it remains high – particularly in cities dependent on the aviation sector. As of the end of July Crawley, Luton and Slough had the highest shares of workers still on furlough, which confirms our earlier predictions that places reliant on airports would be hardest hit by pandemic restrictions.

Several other large cities also remain particularly reliant on the scheme, with the share of workers furloughed in London, Birmingham and Manchester falling more slowly than in the UK as a whole. The number of people claiming unemployment-related benefits in these cities was also higher than average in August, and vacant job postings through to 10 September were lower than elsewhere. This suggests that sharp increases in unemployment may occur when the Job Retention Scheme ends in two weeks’ time.

The number of people claiming unemployment-related benefits as of July fell by 53,000 across the country. Just three cities saw an increase (Dundee, Mansfield, and Swindon), while Blackpool again saw the largest decrease in claims (noting these figures aren’t adjusted for seasonality).

Overall the cities and large towns with the highest claimant count rates continue to be located in the Midlands and North. York is the main outlier to this pattern – it is again the only city with a claimant count rate below the pre-Covid national average of 3%.

The number of job postings registered with Indeed increased between August and September across all cities and large towns apart from Blackburn, Barnsley, and Newcastle. As a sign that the labour market has almost recovered from the immediate impact of lockdowns, only two cities – Aberdeen and Crawley – are job postings still below their pre-Covid levels. This is down from six cities in August and thirteen in July.

Despite struggling for months, the increase in job postings in London now appears to be accelerating. In August, job postings in the capital were up 3 percent on February 2020; as of  10 September that figure stands at 9 percent. Though still below the urban average of 33 percent, these increases bode well for the capital’s recovery into the autumn.

Putting job postings and the claimant count together gives an indication of how the recovery across Britain’s cities and large towns is taking hold. Cities in the bottom-right of the chart, few as they are, are in a strong position – places such as Swansea, Norwich, and Warrington have relatively low claimant count rates and high numbers of vacancies.

Meanwhile despite their relatively high claimant counts in August, cities in the top-right quadrant have seen strong job postings in September. In cities such as Liverpool and Hull, the claimant count has fallen and job postings have risen since July. Depending on the nature of the demand for workers in these areas, a large volume of postings should push the claimant count down still further. (Lines are urban average – vertical; and UK average – horizontal). 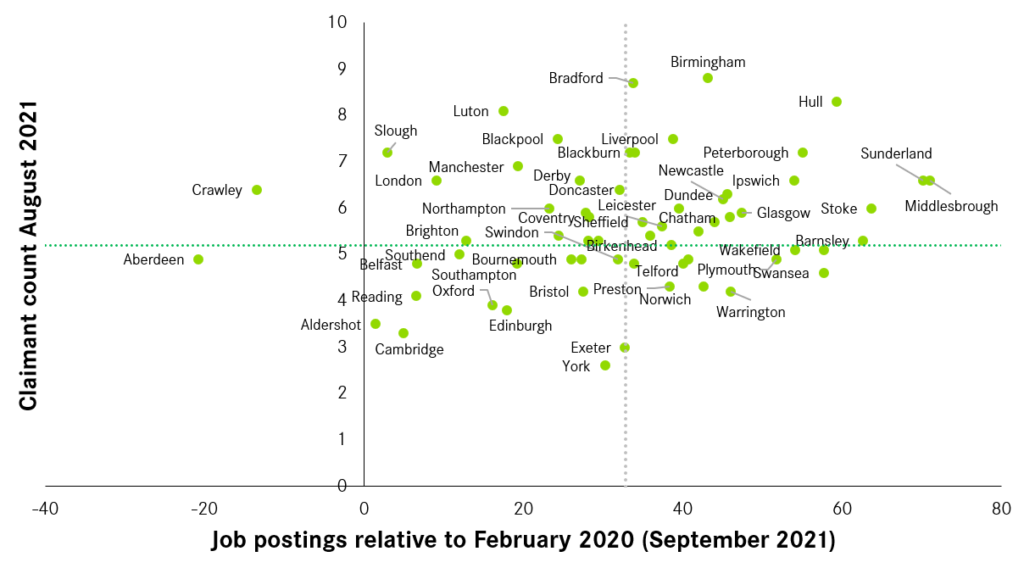 The danger for areas in the top-right quadrant is a drift into the top left. Cities in this part of the chart, such as Manchester, Luton, and Slough, have relatively high claimant count rates and low job postings. This is a situation that will almost certainly worsen as the Job Retention Scheme draws to a close.

There has been a great deal of good news on the jobs market in recent months. All eyes are now on what happens as the furlough scheme comes to a close, and what will happen in places like London, Crawley and Slough in particular. 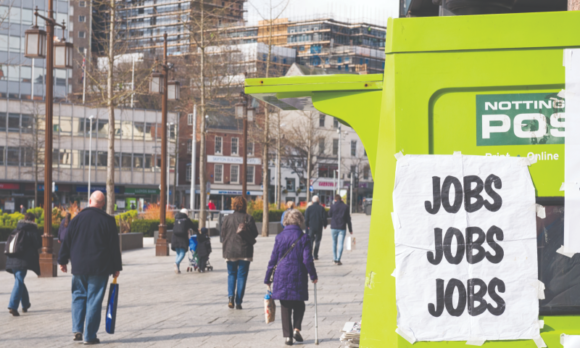