A couple of weeks ago, in light of the accelerating transmission rates of coronavirus across the country, the Prime Minister urged people to work from home again following a number of attempts to get people back to the office over the summer. This was an important announcement, not least because office jobs are a core driver of economic activity in city centres – which tend to perform much better when they don’t rely solely on weekend trade.

So, what does this month’s update of the High Street Recovery Tracker tell us about workers footfall recovery?

Averaged across all 63 largest city centres in the UK, by the end of September worker footfall was at 19 per cent of pre-lockdown levels, which only represents a two-percentage point increase compared to a month ago. This hides significant geographic differences across the country, with large cities like London, Manchester and Birmingham once again lagging behind smaller places like Basildon or Mansfield (Figure 1).

Figure 1- Where are workers back?

Two features of this month’s update are worth mentioning.

Firstly, even for places which are the closest to their pre-lockdown footfall levels, the recovery does not exceed 50 per cent. This is significantly lower than the number of people returning to their workplaces from other European countries.

Secondly, looking more closely at what happened in September, data shows that many cities, whether large or small, have experienced a small but noticeable increase in footfall in the first week of September (Figure 2). London in particular fully caught up with other large cities: between the end of August and the end of September, the workers recovery score in London went up by 3 percentage points, which is slightly more than the average for large cities.

However, this was a rather short-lived trend, likely stopped in its tracks by the prime minister’s announcement, as levels across all cities went down again from the second half of September onwards- except maybe for large cities. 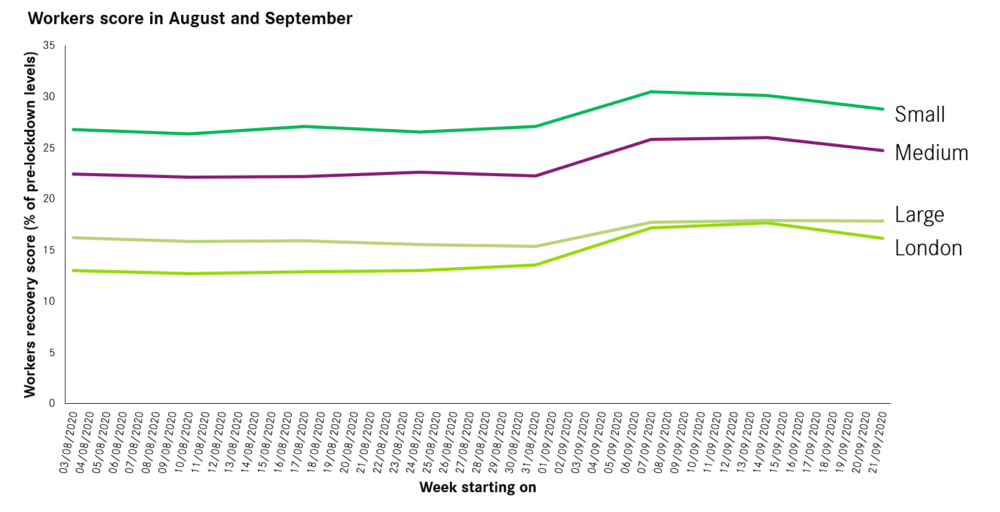 In normal times, city centres in particular have been the main hubs of Britain’s cafés, bars, theatres and galleries, enjoyed by urban dwellers and beyond. The question now is how many will survive the crisis.

Germany and France have stepped in to support such amenities in their big cities. The Chancellor has remained steadfast that he won’t do the same thing here. Last week’s announcement on extra support for areas under greater restrictions is welcome, but it is clear that not all jobs can be saved as it doesn’t offer support to businesses which are affected by the Government’s guidance and restrictions but not officially asked to shut down. This is likely to trigger a large number of redundancies and business closures in the centre of many big cities, where data shows that they haven’t really left lockdown despite the easing of restrictions since June. This is likely to radically change the face of our largest city centres, which aren’t just places of work but places of leisure too.

September's update to the High Streets Recovery Tracker shows that the recovery of high streets has come to a stall in September.

Coronavirus High Streets
Did eating out really help out?

Looking across data on footfall and sales suggests that while eating out did help out, the impact varied significantly across cities.

City Minutes: The impact of Eat Out to Help Out on cities

The Government launched the Eat Out To Help Out scheme to support the hospitality sector and encourage people to return to restaurants and cafes. More than 64 million meals were sold as part...