We have updated our High Street Recovery Tracker, in association with Nationwide Building Society. The new data shows recovery in footfall up until the first week of December. It therefore shows the impact of both the second national lockdown in England and the restrictions for each tier on city centre footfall.

In most city centres, the second lockdown had less of an impact on footfall than the first one

Although all city centres in the UK experienced a decline in footfall when restrictions were introduced early November, nowhere in the country saw activity drop to the levels seen last spring. On average, while the weekly minimum reached back in April/May was 15 per cent of pre-pandemic levels, it was twice as high in November (Figure 1).

That said, as often when we talk about high streets recovery, there is wide variation between places. Breaking down by city size tells us two things. The first is that activity in larger cities fell much further than in small and medium-sized cities (29, 46 and 38 per cent of pre-lockdown levels respectively), which echoes the patterns seen during the first lockdown. The second is that in smaller cities, the impact of the second lockdown was much more muted than in large cities and London.

City size matters as much as the tier of restrictions

On 2 December, the second national lockdown was replaced by the now familiar three-tier system, where the severity of the restrictions depends on the infection rate in a local area.

Footfall data up until the first week of December shows that the stricter the rules, the smaller the bounce-back. Averaged across all city centres, a week after the national lockdown ended, recovery was at 60 per cent of pre-pandemic levels for cities placed under Tier 2, and 53 per cent in cities under Tier 3.

But there are exceptions. In London, despite being in Tier 2 for the first two weeks of December, activity reached only 30 per cent. This is less than the average for all Tier 2 cities (57 per cent) and Tier 3 cities like Bristol and Nottingham (42 and 45 per cent recovery respectively).

And in smaller cities, there is hardly any difference. The strong average recovery for small cities in Tier 3 is driven by strong bounce-backs in Mansfield and Burnley in particular (Figure 2). 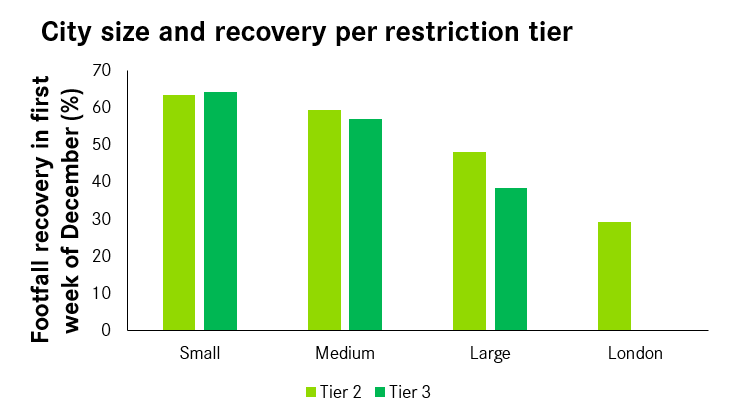 Source: Locomizer, 2020. Note: Liverpool is the only large city in Tier 2.

2020 has clearly been a bruising year for the high street, and restrictions in the run up to Christmas, its most important time, is likely to have compounded this. Businesses on the high street will no doubt be hoping for a brighter 2021, and Centre for Cities will continue to track how this recovery plays out on the High Streets Recovery Tracker.