By any measure, it has been a pretty miserable year for high streets and city centres up and down the country. Shops, bars, and restaurants are still closed, as the official advice is to stay home where possible. But now that the Government has set out a roadmap out of restrictions, what does the last year tell us about how city centres across the country are likely to recover?

Looking at the recovery averaged across all cities – whether it is overall, weekend, or night-time activity – shows that the third lockdown has had a much bigger impact than the second one (Figure 1). While the weekly minimum reached in November was 32 per cent of pre-pandemic levels, in February 2021 it was ten percentage points below that- closer to April 2020 levels.

Figure 1: Footfall scores up until the end of February 2021 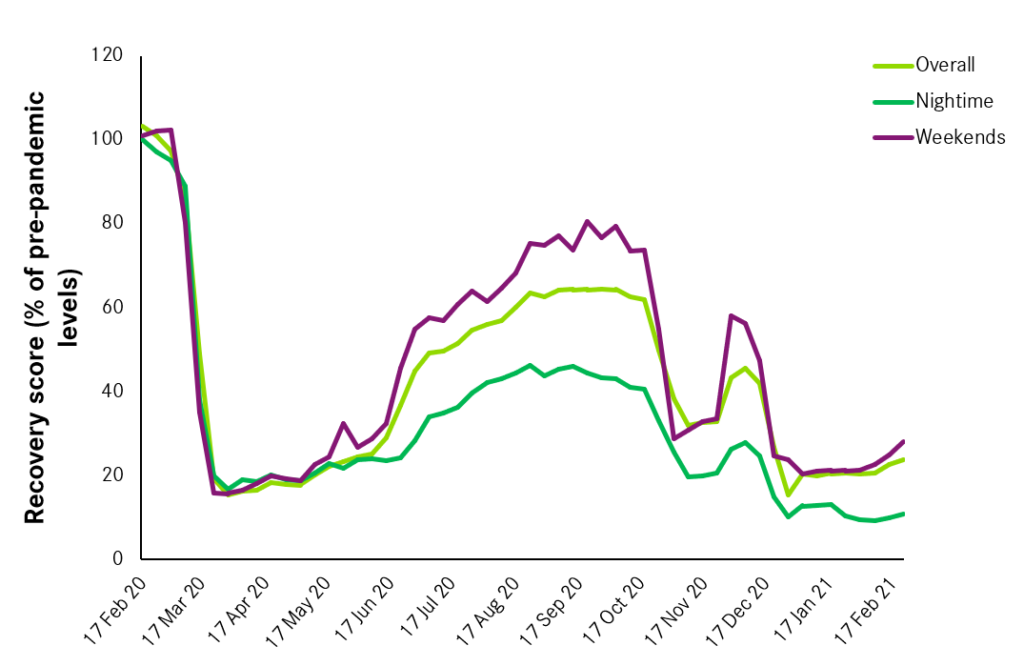 On most indicators, the current situation is much more comparable to the first lockdown. What this means is that looking at what happened last summer when the economy reopened might give us a glimpse of what to expect in a month from now, when restrictions on non-essential shops and outdoor dining are lifted. Drawing on lessons from the first lockdown, there will likely be large differences between cities. In smaller cities footfall jumped to 50 per cent of pre-pandemic levels when retail reopened in June, and 75 per cent when pubs and restaurants reopened early July. By mid-July, cities like Birkenhead, Basildon, Burnley, and Chatham had already returned to their pre-pandemic levels of activity.

At the other end of the spectrum, the recovery was much more sluggish in large cities. In London, for instance, footfall only picked up 2 percentage points when retail reopened, and after pubs and restaurants reopened, it only reached a fifth of pre-pandemic levels. In Manchester, Liverpool, and Birmingham, it was around a third.

This is because in larger cities, the overall recovery is much more dependent on the flow of office workers who in pre-pandemic times spent their money on coffees and sandwiches, but are now working from home, while smaller places may have a smaller concentration of office workers and are more reliant on weekend trade.

Early data from this month’s update suggests that we might see similar patterns this time. As shown in Figure 1, activity picked up slightly in the last week of February, and this was mostly driven by weekend activity (rather than weekday). And a closer look at the data shows that while in large cities like Glasgow, London, Leeds, and Birmingham activity has barely changed, smaller cities, seaside in particular like Bournemouth, Swansea, Brighton, Plymouth and Southend have seen some of the largest rises in footfall- highlighting the role natural amenities may play in attracting people, even when shops are closed.

This time could be different, not least because unlike last summer, we will have vaccinated more than half of the population by the time the economy reopens. While a number of cities can be confident about their ability to bounce back, based on their previous experiences, all eyes will be on large cities- and by extension on who makes up most of their footfall: office workers. Whether or not they return will be key for their economic recovery. Centre for Cities’ High Street Recovery Tracker will chart this in near real time over the next few months.

Is online shopping threatening the future of our high streets?