Nearly three months have passed since high street businesses reopened their doors to customers. But how has activity bounced back since then? Our latest update of the High Street Recovery Tracker, using footfall and spend data for the UK’s 63 largest city centres up until the end of June, shows how this plays out across the country.

When we last updated the tracker, the impact of the loosening of restrictions in April and May 2021 was clear: footfall and consumer spending levels had jumped everywhere in the country. Data showed that spending levels in the last week of May approached 95 per cent recovery overall – reflecting pent-up demand and a boost in confidence to return to shops, most likely driven by the vaccine rollout. Many seaside and tourist destinations in particular saw their activity levels bounce back above their pre-pandemic levels.

But this recovery seems to have lost momentum in the weeks that followed – a pattern which is echoed in similar data sources. By the last week of June, overall footfall levels fell by seven percentage points and spend levels declined by 12 percentage points compared to earlier in the month. And the same tourist hubs like Blackpool, Bournemouth and Brighton, which experienced an initial surge, saw activity fall the most sharply, although nowhere near their winter lockdown levels (Figure 1). A number of factors may explain this bell-shaped recovery, from bad weather to rising infection rates up and down the country.

The pattern we’ve seen throughout last year still holds so far: while small- and medium-sized cities and large towns like Southend, Basildon and Chatham have recovered the most, London is still the city with the lowest footfall recovery – just about a third of its pre-pandemic levels, closely followed by other large cities like Birmingham, Manchester and Leeds. This is still higher than the levels seen last summer, but this vaccine-driven boost seems to be driven by weekend shoppers more than by office workers going back (Figure 2).

And this has important implications for a number of hospitality businesses in these large cities. They rely heavily on office workers spending their money on coffees and sandwiches, much more than on weekend trade. The night-time economy in particular is very dependent on workers coming back to the city centre and staying in town for a dinner or a drink, as shown on Figure 3. 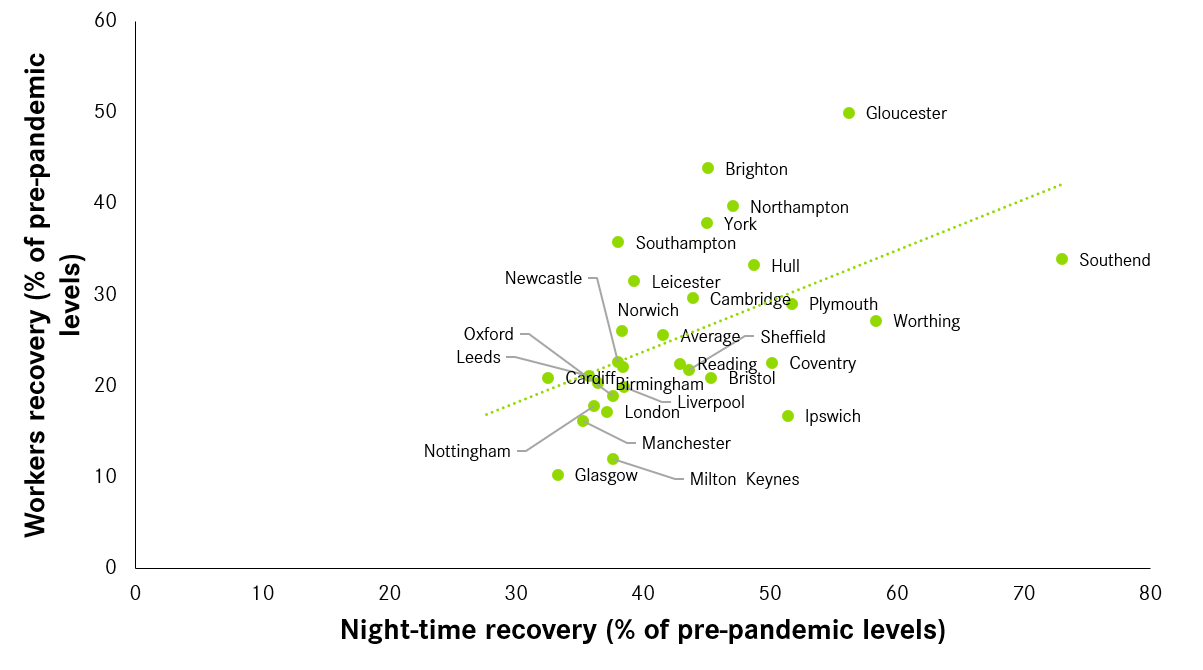 In many city centres, the largest ones in particular, a full recovery for high street businesses is unlikely to happen until their core customers come back – and if they don’t, we should expect more job losses in these industries, especially as the end of the furlough scheme is looming.

It might be too early to worry: let’s hope that the announced end of all restrictions on 19 July, (including the lifting of social distancing, end of remote-working guidance and reopening of businesses which have been shut-down so far, like night clubs) will bring more people back to their city centres safely. But lessons from the past four weeks may also show that people’s willingness and confidence to return to shops and restaurants is a response to how safe it feels – maybe more so than to restrictions being lifted. The next update of the High Street Recovery Tracker will cover the initial impact of the full reopening of the economy later this month, so keep an eye on this space.