One of a number of popular tropes that have been frequently circulated in the past two years is that there has been a rise in spending on suburban high streets at the expense of city centres, and that this is due to more people working from home and spending time and money locally. But does the data really support this?

Suburban high streets have been less impacted than city centres, and are recovering more rapidly

Looking at part one of the assumption first: it is definitely true that suburban high streets have had less of a rough ride than city centres during the pandemic. Cities Outlook 2022 showed that on average city centre high streets lost 28 weeks of sales between March 2020 and September 2021; while in suburbs this was much lower at 9 weeks (see Figure 1). 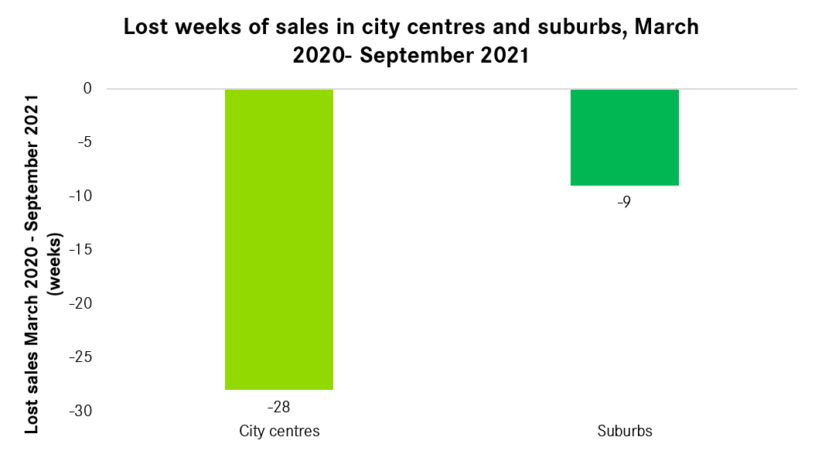 Suburban spending was also quicker to return to its baseline spending levels when the economy reopened last summer. By September 2021, most suburbs were doing better than city centres: averaged across all 63 cities, suburban spending had bounced back to its pre-pandemic levels, while in city centres it was still lagging behind (Figure 2).

Figure 2: Suburban high streets had recovered to pre-pandemic base lines before Omicron hit 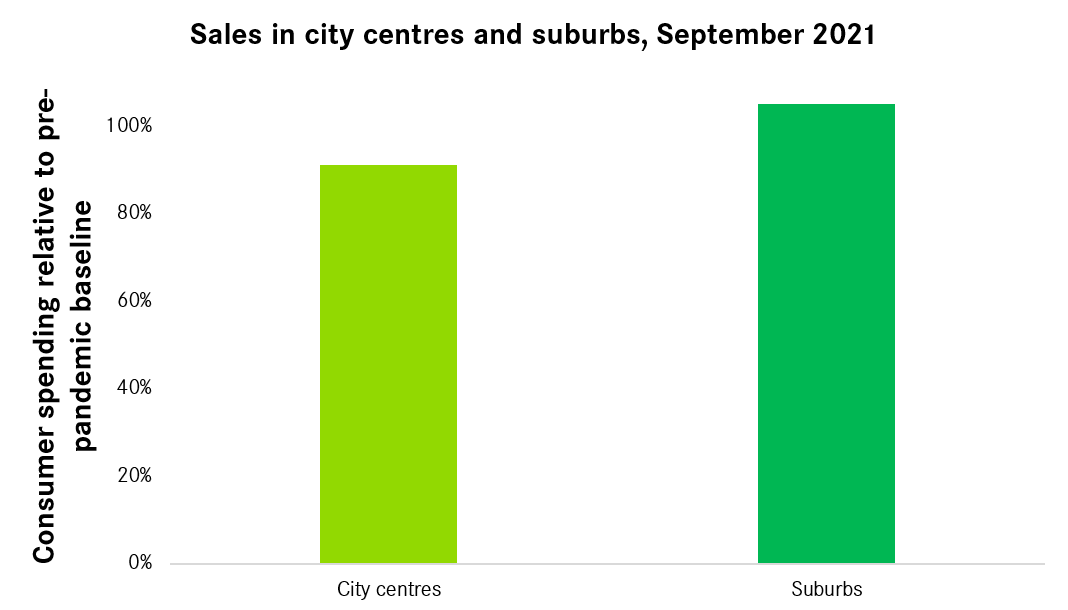 What Figure 2 shows, though, is that although they were doing better than city centres, suburbs were not massively outperforming their own pre-pandemic position. In September, consumer spending (averaged across all cities) was just five per cent above its baseline, so not quite a boost: the level of demand for local cafes, shops and restaurants has not changed much.

The other underlying assumption behind this ‘suburban revival’ was that work from home would benefit suburban high streets because of a ‘Zoomshock’ effect, and that the city centre’s loss was the suburban gain. The thinking went that instead of going out to Pret at lunchtime, former city centre workers would pop to their local coffee shop instead.

Figure 3: There hasn’t been a clear work from home boost for suburbs 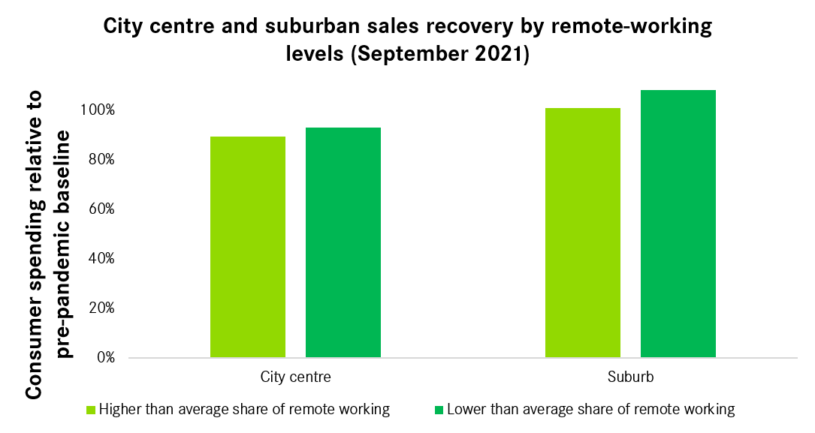 The cities where suburbs did well are places like Blackpool, Hull and Barnsley, which have low ‘work from home’ rates; while in the suburbs of Cambridge, Reading and Milton Keynes where more people shifted to remote working, consumer spending is still below pre-Covid levels (Figure 4). 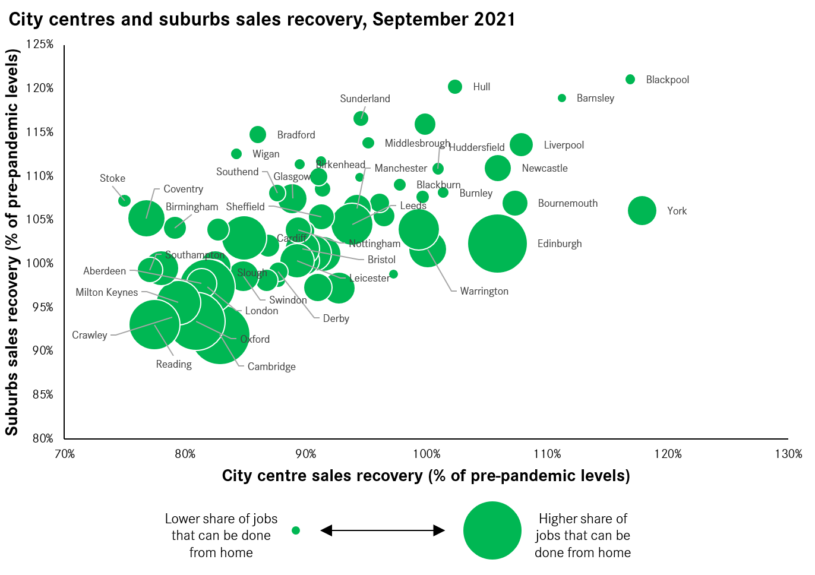 Instead, suburban high streets did better than city centres because they tend to sell more locally, and more essential goods

If remote working didn’t play a major role, then why have suburban high streets been more sheltered?

Firstly, unlike suburban centres, city centres attract people from a much wider area. In 2019, nearly 60 per cent of sales in suburbs came from the suburbs themselves; while city centres, which by definition are smaller and concentrate amenities and jobs, have a much higher share of people coming from both outside the city and suburban areas. And this meant that a much larger section of their usual customer base (including commuters) went missing as a result of travel and social distancing restrictions.

Secondly, Covid restrictions were less likely to shut down trading in suburban high streets because of the nature of their offer. Pre-pandemic, nearly two-thirds of all sales occurred in essential sectors such as groceries or fuel for vehicles (Figure 5). By contrast, in city centres half of sales were made on non-essentials like hospitality, fashion and general retail, which have been directly impacted by forced closures. And even though supermarkets were allowed to trade, they were still impacted by the absence of office workers who, for example, in normal times would spend their money on a meal deal at lunchtime.

Figure 5: Before the pandemic, shoppers spent their money differently in city centres and local high streets 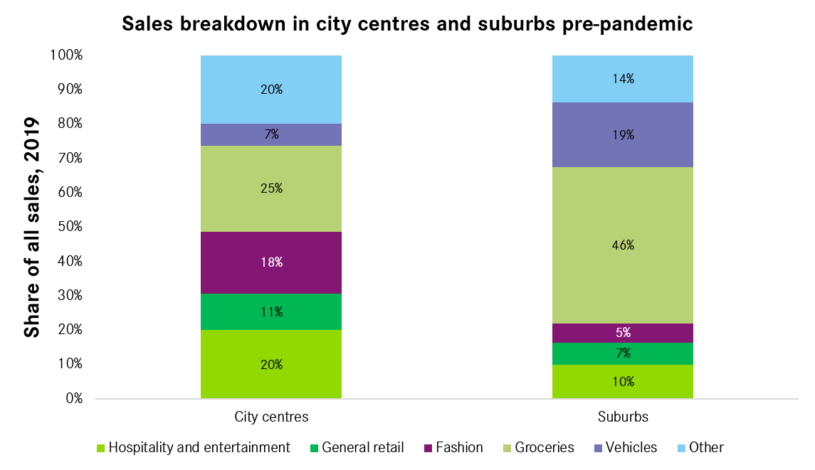 These patterns result from the economics of why different amenities locate where they do. Corner shops and small restaurants can turn a profit on a neighbourhood customer base, and so they can be found throughout the suburbs. But more specialist amenities require a larger customer base to work. This is why the provision of amenities in city centres tends to be broader, and why more specialist amenities are found there too. It’s also why companies like Pret proliferate city centres but aren’t found in less dense suburban areas. Given this, a ‘zoomshock’ bonus for suburban high streets seems unlikely.

There is a tension in the narrative of a ‘remote working boost’ for suburban high streets. Proponents for it suggest workers are willing to embrace a digital, rather than physical working environment by working from home, but that they will still be willing to shun a digital shopping experience in favour of a physical one. So far at least, this falls short of proof.

Coronavirus Future of cities High Streets Levelling up Towns
How has the pandemic impacted high streets up and down the country?