From an economy perspective, Covid’s impact on the high street has been the most visible. From shutters being pulled down during lockdown to queues to get back into shops and pubs when they reopen, these scenes serve as a reminder of how the pandemic has affected both the economy and how we spend our leisure time.

Analysis of data on credit and debit card spending for residents of cities and large towns from just before the pandemic until the eve of the second lockdown (February to October 2020) shows how restrictions have affected spend across the country. Our three key insights are set out below – note that, because this uses card data, the shift from paying with cash to paying by card is likely to have boosted the strength of the recovery in what follows.

1. Spending has bounced back, especially in poorer places

Despite the UK going into the deepest recession on record, national figures suggested that retail had bounced back to pre-lockdown levels. And credit and debit card data shows that spending by urban residents had done the same (see Figure 1). By September, all cities and large towns bar Milton Keynes had seen spend recover to February levels, while Sunderland had seen the strongest recovery. 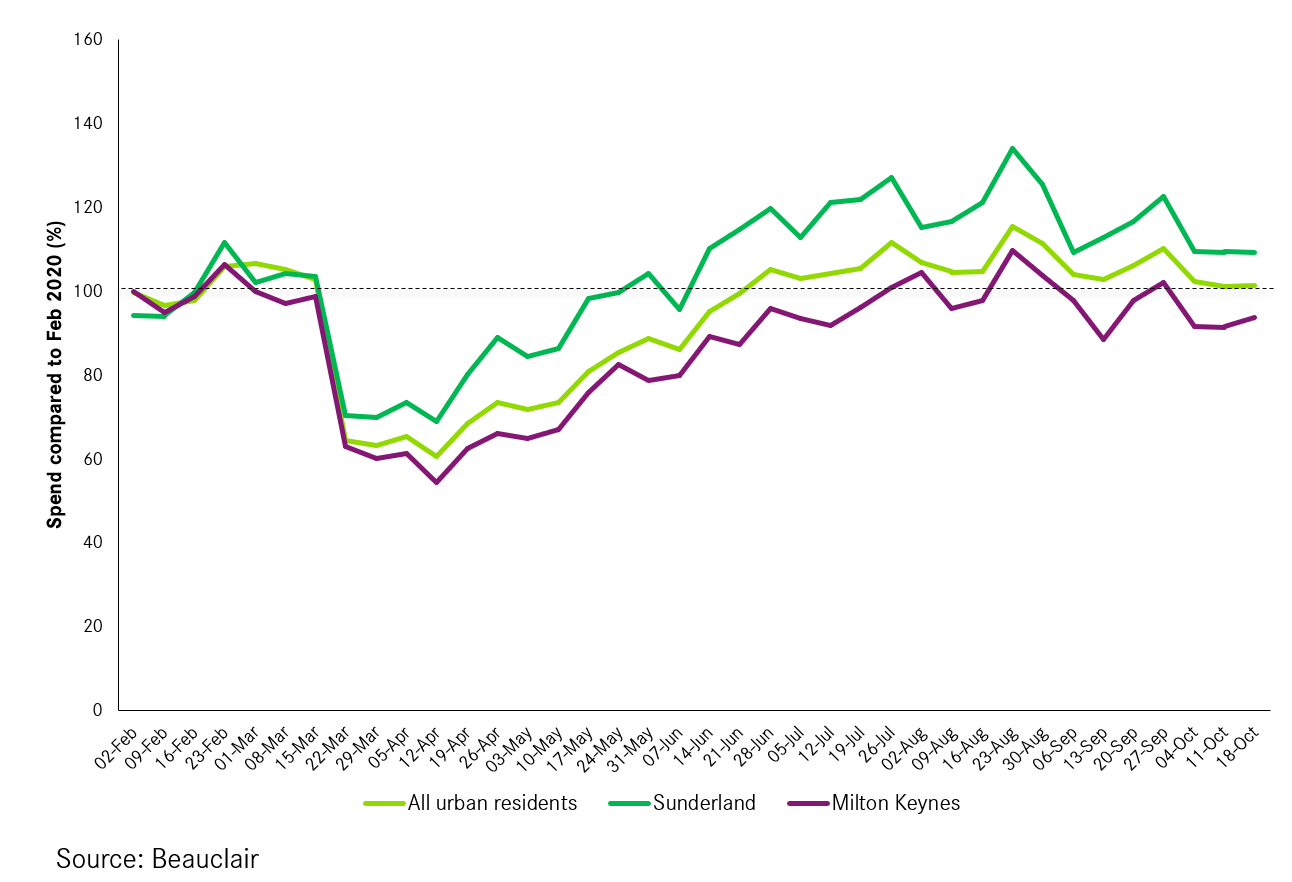 Those places with lower average wages saw both smaller falls in spending and larger recoveries. This is in part likely to be because in less affluent cities, essentials (e.g. groceries) make up a larger share of the shopping basket, so it was more difficult to cut spending back. But it’s also because they didn’t cut spending on non-essential items (such as meals or drinks out) as much as in more affluent cities. It’s not yet clear why this is the case.

2. Bricks and mortar has taken the hit (but it’s not all bad news)

Instead it was ‘offline’ spending on non-essential items that took the hit of the fall in overall spending in the spring. Encouragingly though, despite online spending remaining at a higher level, non-essential spending in bricks-and mortar-shops, bars and restaurants recovered through the summer (although not quite back to February levels). 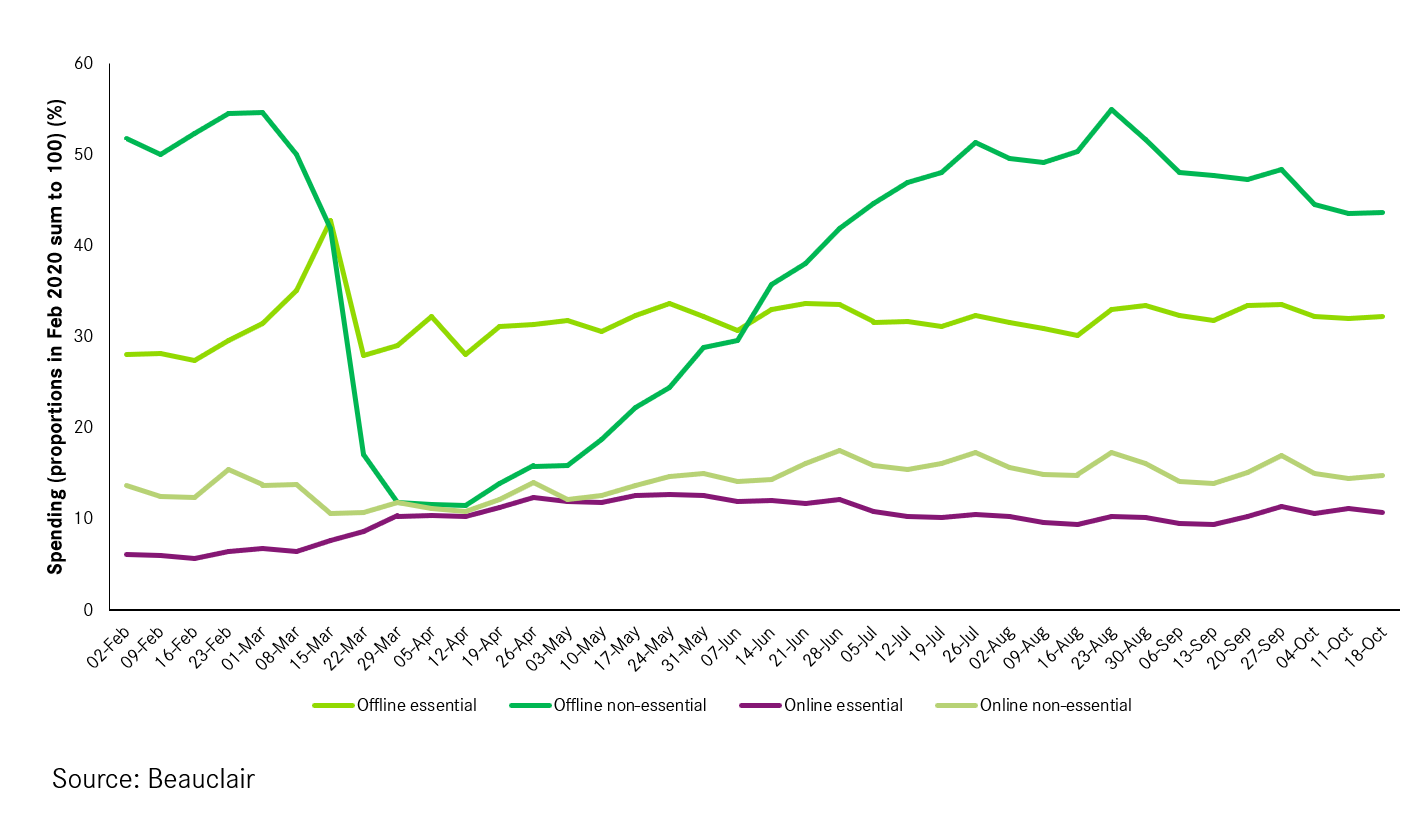 This recovery in non-essential spend in physical outlets means that ,while the share of overall spend going online was higher in October than it was in February, it wasn’t considerably higher: Oxford had the lowest increase (21.4 per cent to 23.5 per cent) and Cardiff had the highest (16.9 per cent to 23.2 percent). Given that a number of leisure businesses, such as nightclubs remained closed, it can be expected that online’s share of the urban pound may fall further whenever restrictions are fully lifted.

Despite this recovery, it has been a tough year for bricks-and-mortar retail. Physical shops, pubs and cafés had lost at least six weeks of spending in Sunderland (the smallest loss) by October, and this rose to 12 weeks in Milton Keynes. 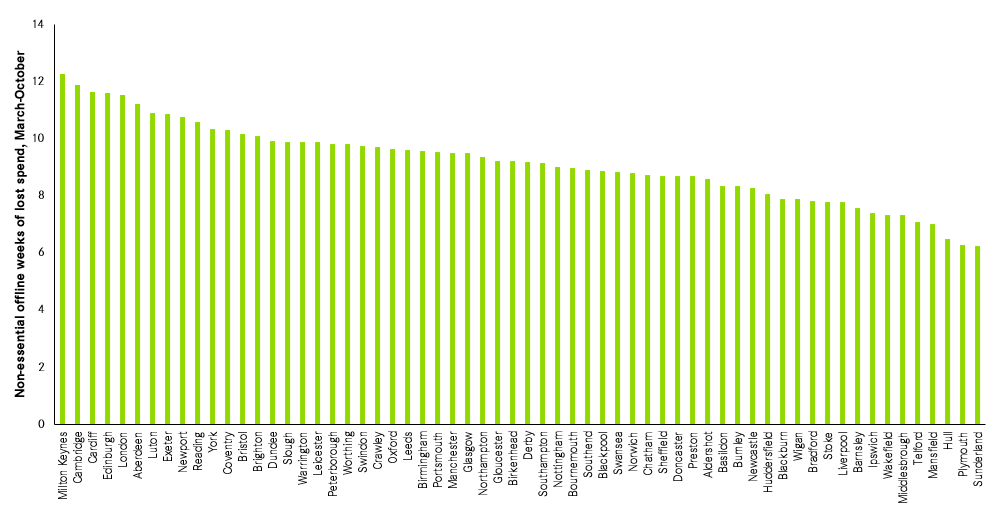 3. Large city centres have not shared in this recovery

Spending in city centres did not recover as quickly as spending overall. The chart below shows that offline spending in non-essential retail recovered more quickly than spend in city centres, suggesting that local high streets benefitted more by the resurgence in overall spend (although given that offline non-essential spending hadn’t quite recovered back to February levels, this does not suggest local high streets received a big Covid boost).

Figure 4: The evolution of different types of spending since February 2020 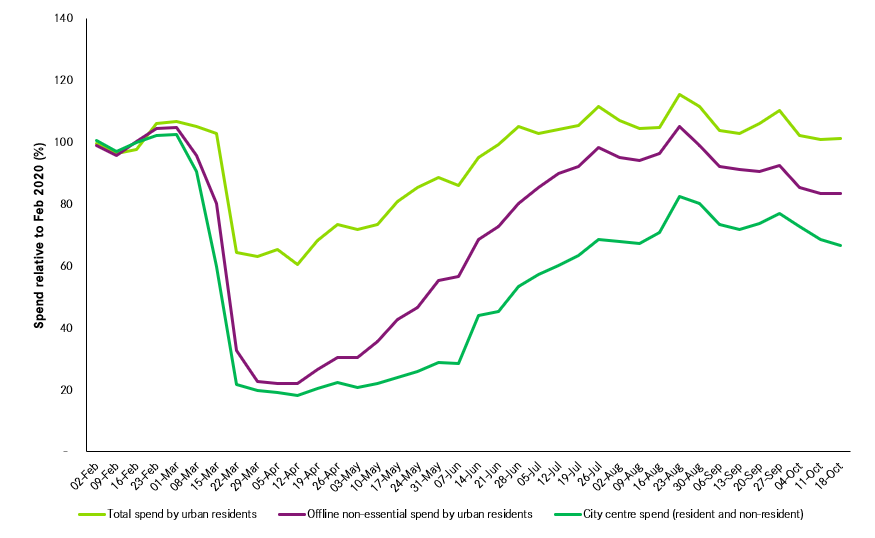 In terms of weeks of lost spend, by October, Glasgow city centre had lost 17 weeks, Newcastle city centre 18 weeks and central London had lost 19 weeks. Meanwhile at 3.6 weeks Northampton had lost the least. Bucking the trend, Edinburgh city centre led this list – it had lost almost 23 weeks of spend. 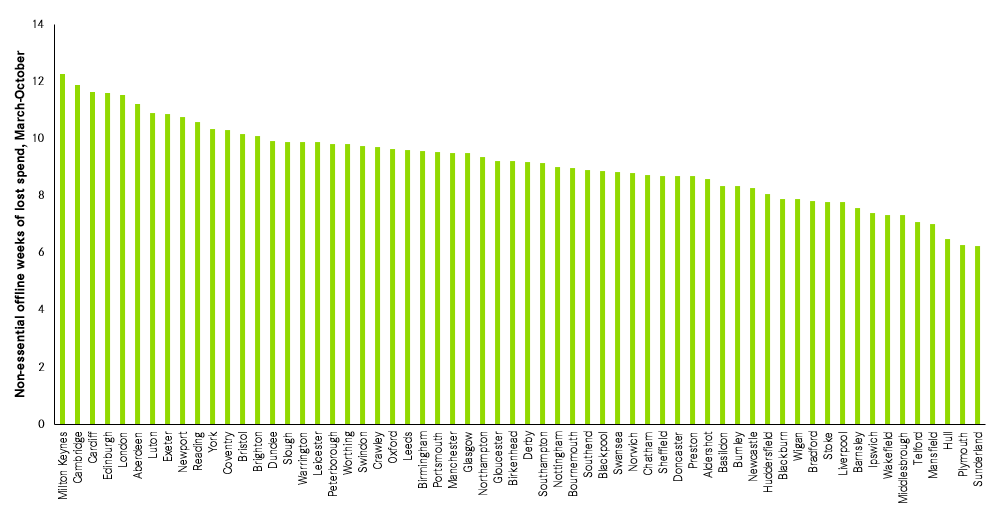 The sharp recovery in spending after the first lockdown gives hope for a similar bounce back after the second lockdown and this weekend’s additional restrictions affecting a significant chunk of the country. Centre for Cities will continue to monitor these trends into 2021.