If the global cotton industry in the 19th century was a web woven with thread, then the Lancashire cotton towns were the spiders at its centre. Today, this has been all but left behind, and most of these cities – Manchester being the stand-out exception – have struggled to respond to the challenges brought about by the decline of manufacturing.

As shown by Professor Nick Crafts at our recent City Horizons event, the cotton towns grew in Lancashire for a number of reasons. Access to fast running water, lower quality soil (meaning there was little demand for agriculture), and cheap labour all played a role. Interestingly, a humid climate, which has long been argued as a reason for their growth, did not. This was underpinned by the construction of railways and canals from the major ports to the cotton towns across the North West. The result was that these towns became the world’s largest producers of cotton during the industrial revolution.

But this success did not last, and the decline of the industry during the 20th century has cast a long shadow across the north west of England. As we show in A Century of Cities, 11 cities in England and Wales had fewer jobs in 2013 than they did in 1911. Of these 11, six are Lancashire cotton towns.

This decline began in the 1920s and 30s, decades before the decline of other areas of UK manufacturing. As a result of increased competition from Japan and protectionism from India, as well as the Great Depression, the chart below shows that the majority of the cities had fewer jobs in 1951 than they did in 1911. This decline became even steeper after the war. And while these cities have seen some jobs growth since 1991, this has not been enough to offset the previous 80 years of decline. 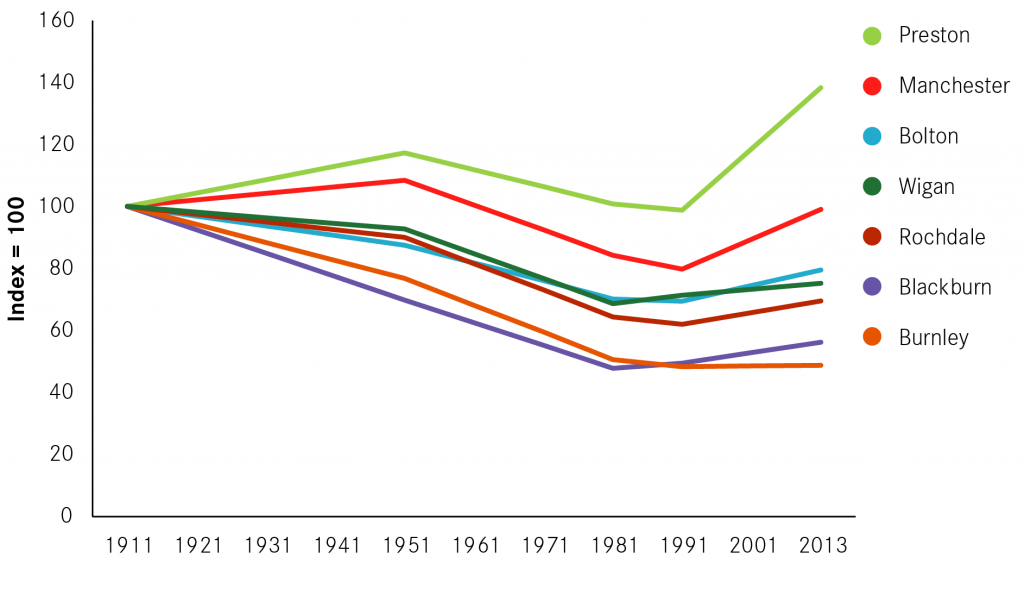 While the decline of the UK cotton industry has hit these cities hard, their current struggles are  not the result of that decline itself,  but their inability to create jobs in new industries. These places were highly specialised in what they did. But this specialisation did not lead to job creation in new, more knowledge-based activities in new industries. Even in Preston – the only cotton town to have more jobs in 2013 than in 1911 – job creation has tended to be in lower skilled activities. This has meant that these cities have struggled to adapt to the changes seen throughout the 20th century and have been unable to reinvent their economies.

Manchester serves as the exception. Although it has fewer jobs today than a century ago, its economy is undergoing a process of reinvention. A rejuvenated city centre has supported strong growth in new, knowledge-intensive services jobs, which grew by 77,000 between 1991 and 2013. While this growth has not been enough, as yet, to offset the decline of jobs in more traditional industries, the trajectory of growth over this period suggests that the city is about to step out of the long shadow cast by the decline of textiles.

The challenge for the cotton towns over the next few decades will be to follow Manchester’s lead, break the cycle of replication that they have become locked into and focus on supporting skills and innovation.  Crucially, they should also look to make the most of their proximity to Manchester. As its city centre continues to attract high paying, knowledge-focused jobs, a key focus for the former cotton towns should be to ensure that their residents can access these job opportunities.