Half-term holidays mean parents are on the hunt for activities to keep their kids busy while schools are closed. Not only can these be fun ways to keep the little ones busy, but as our new report shows, they are also vital tools to develop the ‘robot-ready’ skills they will need in future.

As robots incrementally replace people in carrying out more routine, manual activities, the ability to think creatively, solve complex problems, and work in a team will all be advantages in the labour market. The National Curriculum already helps to develop these skills, but it is outside the classroom that children get to apply them in practice and consolidate them.

However, despite most schools offering these clubs, the ability for children to access them varies substantially by socio-economic background. Financial and other barriers mean that children from disadvantaged backgrounds are 30 per cent less likely to participate than their better-off peers (46 per cent against 66 per cent). These are worrying differences. It is precisely those young people from disadvantaged backgrounds who would benefit the most from activity beyond the classroom.

Some 13 per cent of pupils in England are disadvantaged, using eligibility for Free School Meals as a measure, but as with many things, this varies across the country. The share is much higher in cities in the North and Midlands. In Liverpool, 27 per cent of all pupils are eligible for Free School Meals, in Hull, it’s 22 per cent. In contrast, in Aldershot and Bournemouth, only 7 per cent of pupils are from disadvantaged backgrounds. 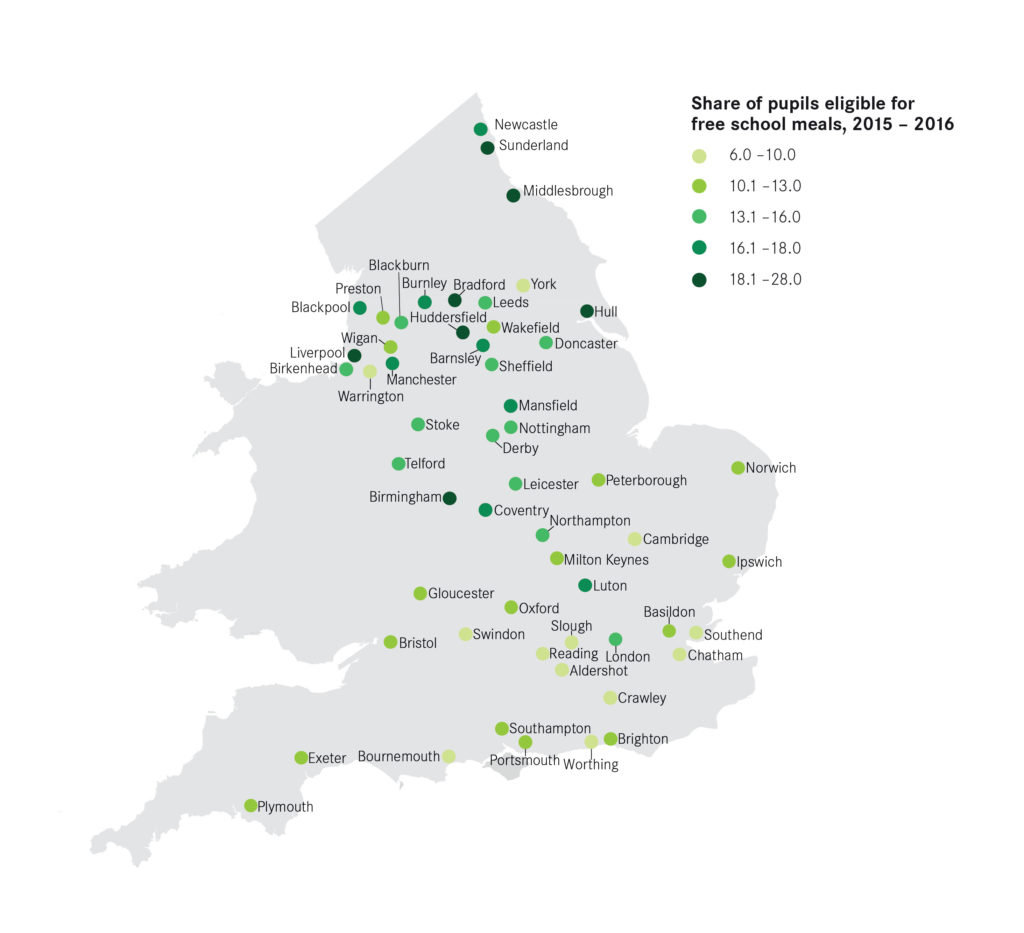 It is perhaps unsurprising that places with weaker economies tend to see a lower take-up of extra-curricular activities. But, with the rise of the robots, the risk is that these places will be further weakened as jobs are lost to automation.

Take Huddersfield and Sunderland for example: not only is the share of pupils from disadvantaged background higher, but both cities also feature in the top 10 for jobs at risk of displacement by 2030. They too are among the cities with the lowest share of highly-skilled business services jobs and these jobs are the most likely to be sustained – and grow – in the future, and are relatively better paid and more productive.

There is a risk that the gaps between places will widen if action is not taken. Focusing on improving not just subject-specific accomplishments, but interpersonal skills too, through activities in and out of the classroom, is vital and should be a priority for the national government. There should also be a focus – both at the national and local level – on policies aimed at improving access to existing extra-curricular activities, as well as raising awareness of them, especially in our less affluent cities or in the parts of cities with high levels of disadvantage.

While many children will have been enjoying a range of activities during their week off, school holidays cannot be relied on as the sole way of developing essential skills for the future. They should be an integral part of any long-term strategy aimed at ensuring young people develop the analytical and interpersonal skills necessary to succeed in the jobs of the future.

The Future of Work
The case for real full employment everywhere – with Alison McGovern MP, Shadow Minister for Employment