Marked by several strikes, severe disruptions and slashed timetables, summer 2022 has not been a particularly good time for rail travel in the UK. For passengers in Germany though, the situation was much brighter. From June to August, the German government launched an experimental scheme that saw passengers offered unlimited travel on regional train networks, trams and buses for just €9 a month. Now that this has come to an end, let’s look at early results: has it met the objectives it set, and how could those lessons be transposed to the UK context?

The cheap ticket scheme came into force on June 1st, as part of a €30 billion cost-of-living relief package. It was designed to kill more than two birds with one stone: softening the blow from inflation by cutting transport cost and fuel consumption, while encouraging motorists to ditch their cars and lowering transport emissions. Not least of all, it also hugely simplified a complex ticketing and fares system – an issue we know too well in the UK.

About 38 million people have used it – that’s nearly half of the total population. Its central premise to make public transport cheaper was largely achieved (for comparison, a monthly pass for Central Berlin only is nearly €90) to the point that it reportedly slowed down inflation by about 2 percentage points. As many as one in five Germans declared using public transport regularly for the first time since the introduction of the monthly pass.

Summer months have seen a marked increase in rail usage (overall, a 42 per cent rise compared to 2019). Touristic rural areas saw the biggest jump (around 80 per cent over 2019 levels in July, more than double the level seen in cities), and most of this increase was seen during weekends (Figure 1).

Figure 1: Rural areas saw a jump in rail usage, and a smaller drop in car usage 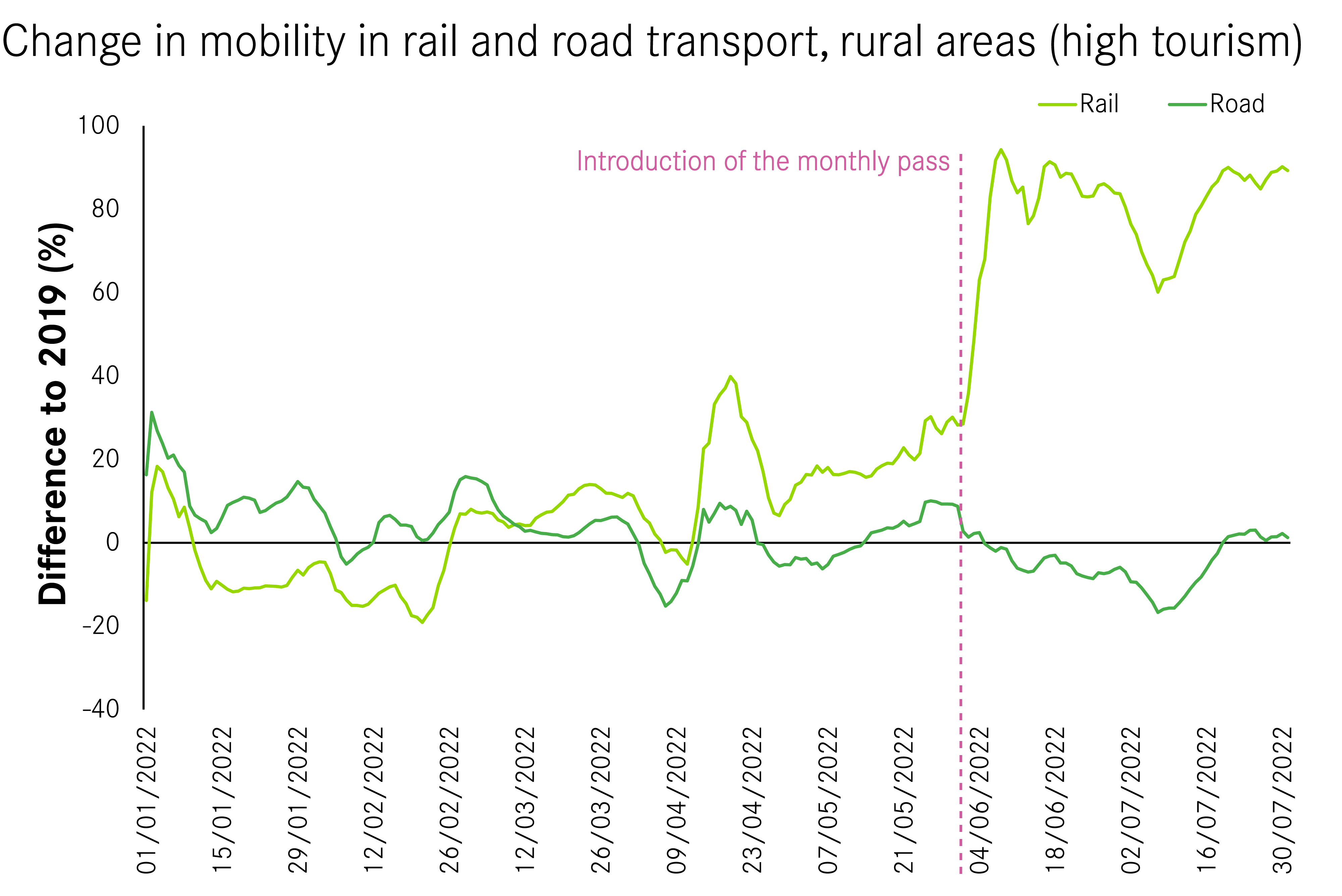 Source: Federal Statistical office of Germany. Note: the data shows a 7-day average for distances of 30km or more.

However, the scheme did not achieve its entire substitution goal. As Figure 1 shows, despite the significant increase in rail travel, the drop in car usage is temporary as road use moves to pre-intervention levels by mid-July. This suggests that it generated additional demand but without ultimately getting many people out of their cars.

The evidence on this is mixed: TomTom reported that traffic congestion went down in 23 (out of 26) cities over the summer, while others recorded a drop in air pollution and carbon emissions. In urban areas, as Figure 2 shows, the introduction of the scheme has clearly slowed down a marked increase in road usage, which by the end of July still sat below its 2019 levels.

Figure 2: In urban areas, the monthly pass seems to have slowed down car usage 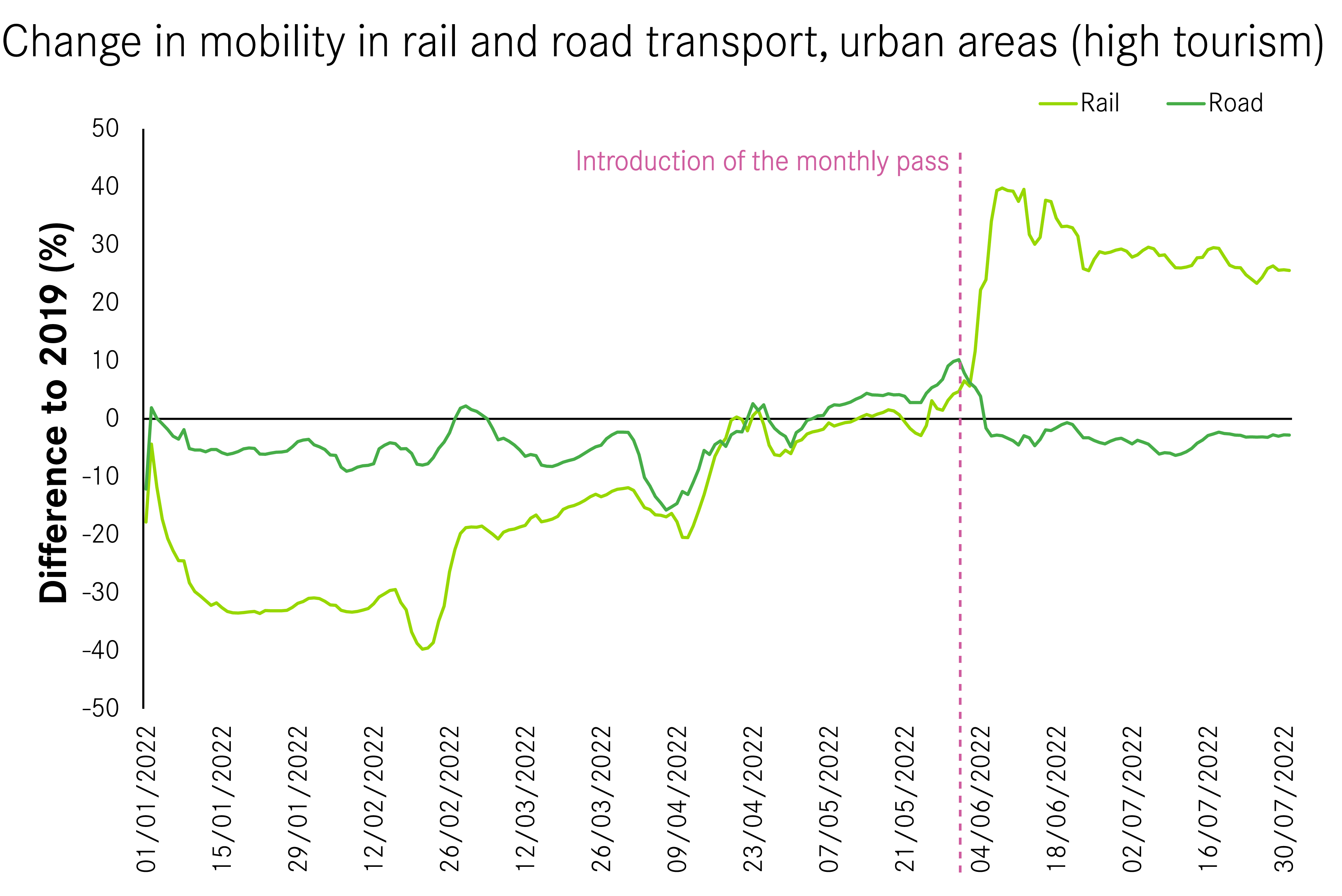 Source: Federal Statistical office of Germany. Note: the data shows a 7-day average for distances of 30km or more.

On balance, though, the scheme seems to have mostly induced rail demand by encouraging more long-distance journeys outside cities, rather than causing substitution to cheaper public transport (and less fuel consumption) on local daily journeys. Behaviour change may take time – but it is worth noting that if easing the cost of living was the target, it begs the question whether spending €2.5 billion on the scheme was the most effective way to deliver.

How can the lessons from this scheme be applied to the UK?

It is clear the UK would benefit from cheaper public transport. Rail travel is very expensive in the UK, more so than in most European countries. Years of car-friendly policies (such as the decade-long freeze of fuel duty), combined with sustained under investment in and deregulation of public transport have made driving a much cheaper option in most parts of the country, with rail fares increasing much faster than motoring costs. Public transport usage has declined outside London in recent years and hasn’t yet bounced back to pre-Covid levels (unlike car usage). As a result, transport carbon emissions have stagnated in recent decades, and most urban areas are blighted by toxic air.

However, in the UK, cost is not the only prohibitor to public transport usage. In the UK’s largest cities, less than half of people can reach their city centre by public transport in less than 30 minutes. This is down to poor connectivity, accessibility, and reliability, caused by a lack of integration and planning – all issues that a cheaper ticketing system wouldn’t directly solve.

That said, there are two lessons the UK can take from Germany’s experimental scheme.

In the very short term, the UK Government is going to have to make tough choices to ease the cost-of-living burden. Other countries are taking the lead on the transport front: Germany is already discussing next steps, while Spain is now making regional transport free. In the UK, such initiatives seem off the table – although on a much smaller scale the Government made a positive and welcome step forward this weekend by announcing a £2 bus fare cap, alongside the initiatives taken by mayors in Greater Manchester, West Yorkshire and Liverpool City Region.

In the medium to long term, the UK needs an overhaul of its transport policy, which should include higher levels of investment in public transport towards an expanded, better integrated, and more efficient network. Finally, learning from the German’s experiment, this should be combined (and funded) with policies such as road user charging that proactively discourage car usage, particularly in cities.

Cost of Living
Cost of living tracker
See all