While it’s arguably received more attention than the fiscal deficit, welfare certainly hasn’t dominated this election campaign. Yet as the single biggest component of government spending and with the biggest cuts potentially yet to come, the next government faces some important choices with regard to welfare policy. The impacts of these choices – on income and work incentives – will be uneven, as the scale and nature of welfare spending varies between places.

The next government will inherit the £9 billion worth of cuts set to come in over the course of the next parliament. Most significant among these are the freeze to working-age benefits, cuts to child tax credit and the continued roll-out of the less generous Universal Credit. The Conservatives would continue to implement these plans, while Labour has pledged to ‘review cuts in Universal Credit’ with a £2 billion reinvestment. Jeremy Corbyn has also pledged to end the benefits freeze, although it is not in the party’s manifesto. The Liberal Democrats have pledged to reverse the cuts in full.

Whether implemented or not, the decisions made about future welfare cuts will have implications for millions of people across the country. But, as the scale and composition of welfare spending varies between cities, some cities are likely to be more affected than others.

There is huge variation in levels of dependency on welfare spending

The overall size of the welfare bill varies significantly across different cities. The benefits bill per capita in Blackpool (£4,400) is more than twice the size of the bill in Cambridge (£2,100). These two cities highlight broader geographic patterns in welfare spending, with every city in the top 20 for welfare spending on a per capita basis being in the North, Midlands or Wales, while per capita spend tends to be far lower in cities in the South. Overall, cities with the strongest economies tend to rely less on welfare payments than other cities. If the welfare axe does continue to fall over the next five years, cities with weaker economies may well be hit hardest.

The effects of any changes to welfare spending need to be considered alongside changes to tax and minimum wage policy. The benefit bill tends to be much higher in low wage cities where increases in the National Living Wage will have more bite. Yet, given the scale of the cuts and that low paid workers don’t necessarily live in welfare dependent households, reductions in welfare spending in these cities are not likely to be offset by increases to the wage floor.

Mitigating the impact of cuts in these places means focusing on ways to improve access to employment opportunities in these cities by improving skills and supporting employers to create more jobs and offer higher wages. 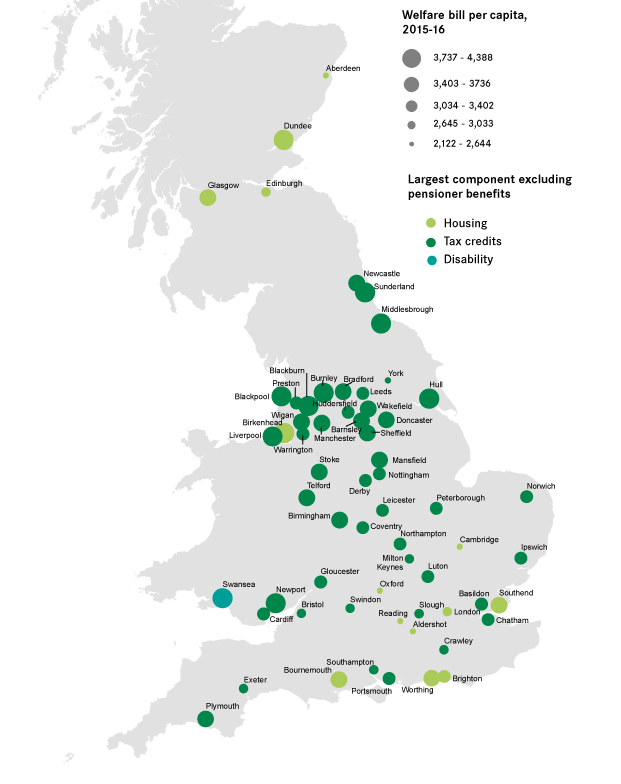 Alongside the variation in the relative size of the benefits bill across cities, the composition of welfare spending varies too. This may mean that some cities are better protected from the cuts than others, particularly those where pensioner benefits account for a large proportion of expenditure. With the majority of parties pledging to maintain the ‘triple lock’ (or the inflation and earnings components of it, in the case of the Conservatives), overall levels of welfare spending may be better protected in cities, such as Bournemouth and York, where the state pension accounts for more than half of total expenditure. By comparison, the state pension accounts for just 24 per cent in Slough.

Spending on housing benefit tends to be much higher in high cost cities, for example. Nationally, spending on housing benefits ranks as the third largest expenditure behind pensioner benefits and tax credits. In the four least affordable cities – Brighton, Cambridge, London and Oxford – the housing benefit bill is 1.5 times larger than the tax credit bill and 16 times larger than the bill for Job Seekers Allowance (JSA). Housing benefit accounts for 22 per cent of welfare spending in London, whereas it comprises just 8 per cent of the total bill in Huddersfield and Mansfield. The next government will need to address housing affordability by increasing supply in these cities if it wants to address the underlying causes of demand for housing benefit.

Any changes to welfare policy need to be accompanied by the appropriate mix of policies in different cities in order to sustain and improve living standards over the course of the next parliament and beyond. In high welfare cities, this means focusing on policies such as education and skills to improve the opportunities for people to move off welfare and into work. In high cost cities, it means finding ways to increase the supply of housing. Cities themselves are arguably the best placed to get this balance right and to integrate interventions in ways that lead to better outcomes. The next government needs to look to cities if it wants to reduce the burden on the public purse and improve outcomes for people.