Immigration, now more important than ever in modern British politics, could be on the brink of radical change. The Conservatives promise to reduce net migration to the tens of thousands and to double the Immigration Skills Charge on companies employing migrant workers. Labour has pledged that Freedom of Movement will end when the UK leaves the European Union, although they have made no commitment to reduce the number of migrants.

It’s not clear what in reality either Party, if they were to form the next government, would actually do. But if there are any dramatic shifts in immigration policy, it is cities that will be disproportionately affected, because migration to the UK is overwhelming an urban phenomenon.

Proportion of all immigrants in cities 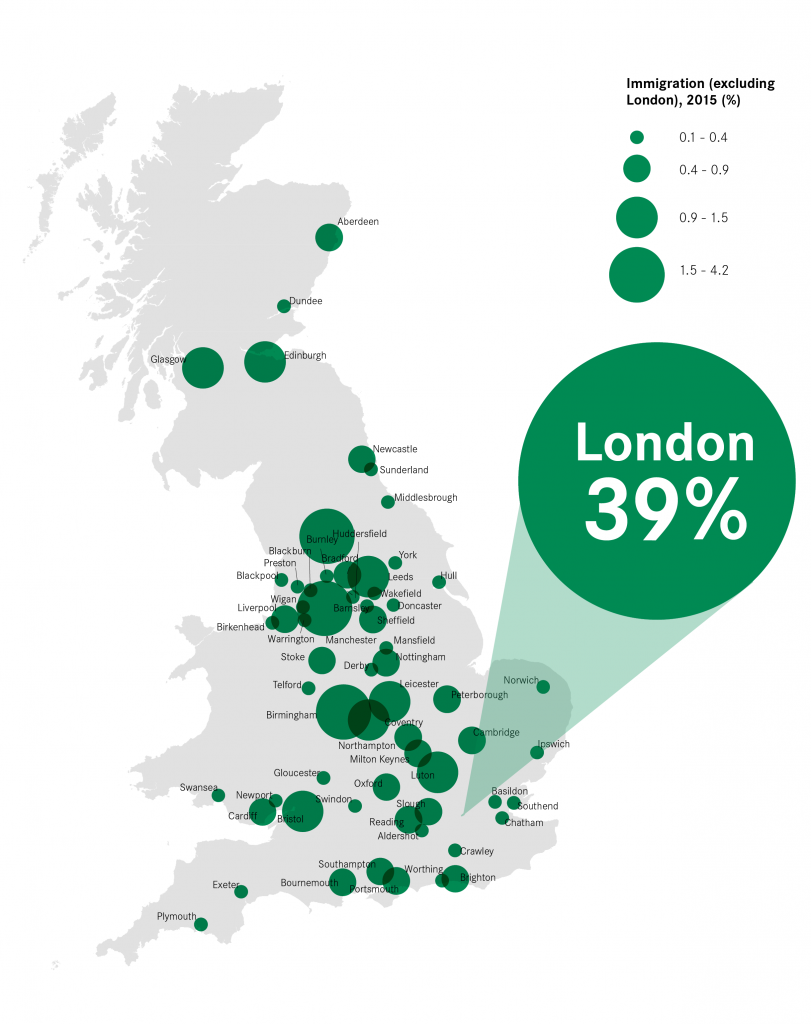 While cities account for 55% of the total population, 76% of migrants move to Britain’s urban areas. London receives more migrants than all other cities combined, with 39 per cent moving to the capital. The next most popular cities are Birmingham and Manchester, receiving 4.2 per cent and 3.3 per cent of migrants, respectively. As centres for career progression and cultural and social opportunities, it is not surprising internationally mobile people in work would gravitate towards cities.

As can be seen in the graph below, changes in the rate of migration are driven mostly by the flows cities experience. The latest national figures indicate that net immigration to the UK fell by 30 per cent between 2015 and 2016 to 248,000. National insurance registrations to migrants have fallen over the last year in line with this and over the same period, cities saw registrations fall by 37,000 with London accounting for 27,000 – equivalent to 91 per cent and 67 per cent of the fall nationally. The majority of cities, 45 out of 62, have seen a fall in the flow of migrants. 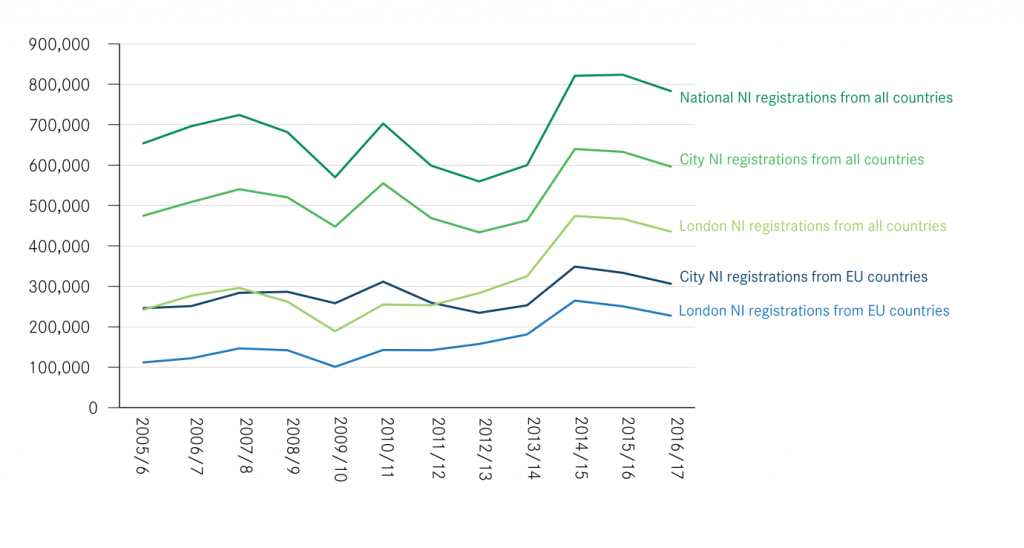 Most of this has been driven by a fall in EU migrants – equivalent to 86 per cent of the fall in total migrants between 2015/16 and 2016/17, and 84 per cent in London. If restrictions on the movement of people post-Brexit reduce these flows further, it is cities, and London in particular, that will bear the cost.

Any reduction in migration to UK cities is likely to impact on their economic performance. Large cities, and London in particular, are likely to either end up compensating for fewer skilled international migrants by increasing the ‘brain drain’ from other parts of the country, or see a decrease in productivity.

Our cities are shaped and built by the migrants who work, live and study in them, spend their wages in local businesses, and pay their taxes. Whoever wins the election will need to recognise that any changes to immigration will have ripple effects across cities, and not just at passport control. In the rush to introduce a more managed system, the contribution migrants make to cities cannot be ignored.