Should a university education be free to all? Or should graduates pay for the benefits of their education? Another election, another chance to debate university tuition fees. Both Labour and the Green Party have vowed to abolish fees completely and reinstate maintenance if elected on the 8th June. Currently students in poorer cities are less likely to attend university, but would scrapping fees change this?

Using Higher Education data  we can see the likelihood of young people in each city choosing to study for a degree. There is a lot of variation, as the map below shows. 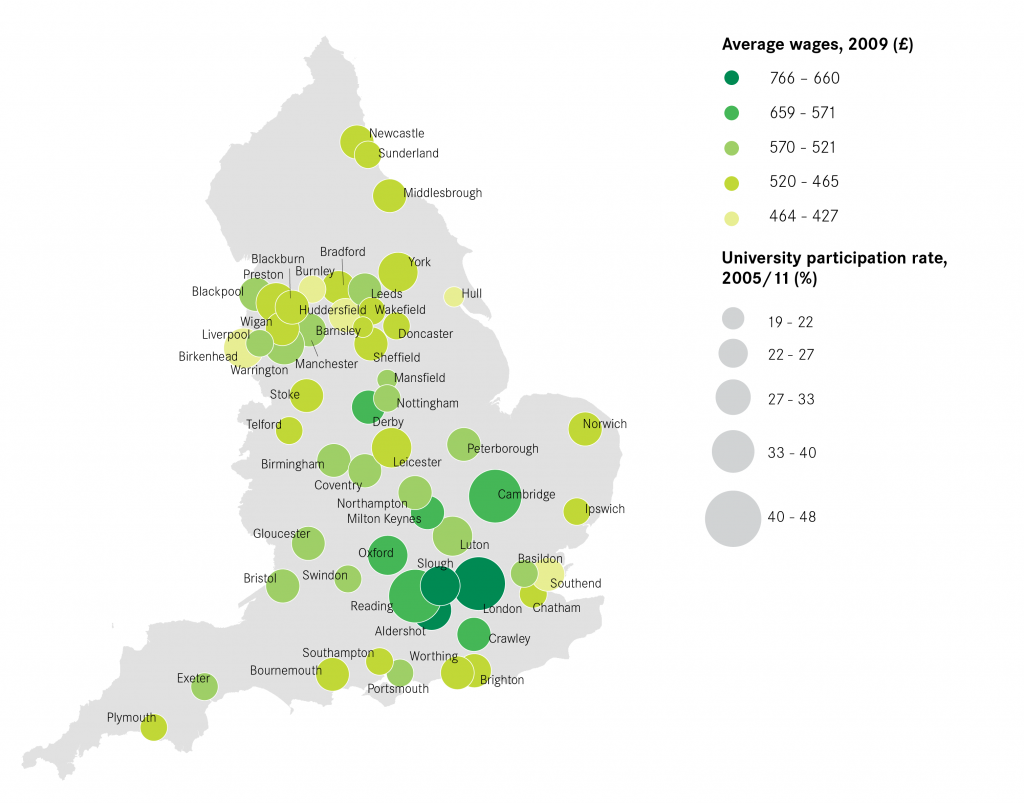 Young people in Cambridge and London are most likely to go to university, with 48 per cent and 42 per cent respectively of their 18 year olds choosing to study for a degree. In contrast only 19 per cent of Hull’s 18 year olds went to university. Similarly low participation levels were found in  Barnsley (22 per cent).

The richer a city, the more likely young people will attend university. A clear pattern emerges from the data, showing a positive relationship between average earnings of city workers and university participation. The perception, based on this picture, is that university fees are a barrier for people from lower income backgrounds. So abolishing fees, a seemingly  progressive policy, should in theory increase university attendance of lower income groups.

But the evidence isn’t clear about the impact of fees on students from poorer backgrounds. There are a couple of indications that scrapping them is unlikely to close the participation gap.

The last tuition fee rise didn’t lead to lower participation of poorer students. At a national level (city data is only available to 2011) the 2012 increase in fees slowed the annual increase in university applications. But crucially there was no widening of inequalities as a result. Research by UCAS showed that “differences by background reduced” from 2011 to 2013. This suggests fees did not deter poorer students as was expected. That said, it’s not yet clear what the impact of the 2015 removal of maintenance grants has been.

Research from the IFS suggests scrapping fees would be regressive, benefiting medium and high-earning graduates. This is because student loan repayments are linked to earnings, it is high-earning graduates who pay back the largest amount of their loans. Removing tuition fees and offering maintenance grants would mostly benefit them, as poorer graduates repay much less in the current system.

The barriers to access are complex, and it isn’t clear whether abolishing tuition fees will do much to close the gap in university attendance. Combating differences in education attainment from an early age, improving career guidance and mentoring schemes all have a role to play in supporting people from poorer backgrounds to go to university.