On the eve of the General Election announcement, criticism of the Government’s Clean Air Act made air pollution big news. Despite this, most parties fail to address environmental issues which largely affect UK cities and over half of the UK population. While much current discussion is around what is in the manifestos, let’s have a look at how one that didn’t get much attention plays out across the country.

Data from Public Health England provides estimates of particulate matter –  the sum of all solid and liquid particles suspended in air many of which are hazardous – on a local authority basis to allow us to look at the geography of something that is both responsible for a number of deaths and has recently been linked to poor sleep.

10 local authorities with the worse and best air quality 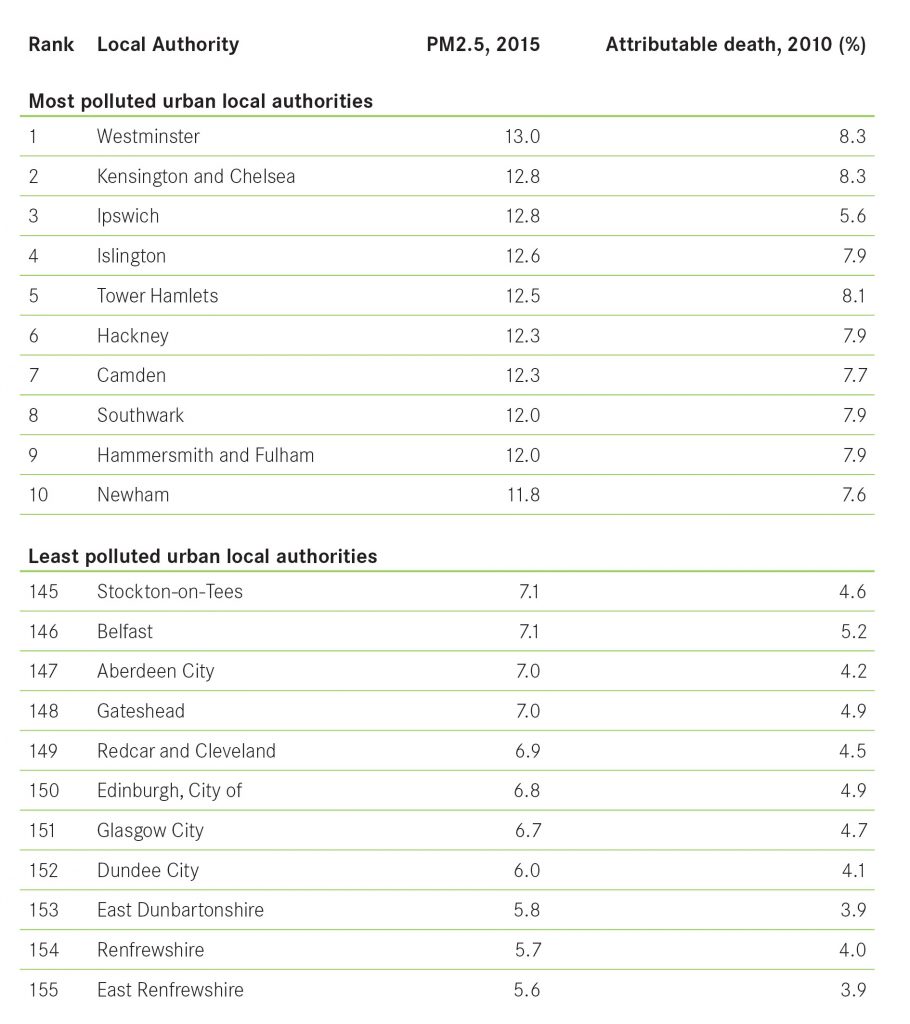 Three findings emerge from the data:

Firstly, London boroughs dominate the list. The 19 local authorities with the worst pollution in Britain are all in London. Westminster and Kensington, two of the richest authorities in the country, lead this list. And it is estimated that long term exposure to air pollution was to blame for 8.3 per cent of all deaths in 2010 in these two areas.

Thirdly, larger urban authorities aren’t necessarily the most polluted. Nottingham, Leicester and Luton have worse air quality than Manchester. Ipswich has higher levels of particulate matter than London, and York and Glasgow are among the least polluted cities in the UK.

Ed Glaesar would describe pollution as a ‘demon of density’ – a downside of concentrating growth in specific places. While it may have fallen off the agenda in this election, it’s a problem that both central government and cities must tackle if they are to stay attractive to both people and businesses.

London already has a low emissions zone, a traffic pollution charge scheme with the aim of reducing the tailpipe emissions of diesel-powered commercial vehicles, and Sadiq Kahn is proposing further restrictions, including a new toxicity charge to be introduced from autumn 2017. Similar steps will be required elsewhere to tackle this problem.