The national minimum wage has become increasingly popular with politicians in recent years and remains so in this election campaign. And it isn’t surprising. Pledges to increase the minimum wage offer a pay rise to lots of workers at a time when the UK is experiencing an unprecedented fall in real wages – OBR forecasts suggest that earnings will still be lower than their 2007/08 level in 2021/22. The concern though is that any significant increase could impact on employment, particularly in low wage sectors and places. Just as the benefits to workers in low wage cities may be larger, the costs may be larger too if employers struggle with rising wage bills.

From left or right, a single legal wage floor is always going to be a blunt tool – in part because of the significant differences between cities across the country.

The most recent increase in the NLW, which tracks towards the Conservatives’ 2020 goal, is likely to have had a much greater impact outside London and the South East where a higher proportion of people tend to work in low pay sectors. One in seven employees in Wigan, Doncaster and Hull are likely to have seen an increase in their wages as a direct result of the 2017 NLW. This contrasts with just 1 in 40 in Oxford.

Coverage of the April 2017 NLW at city level 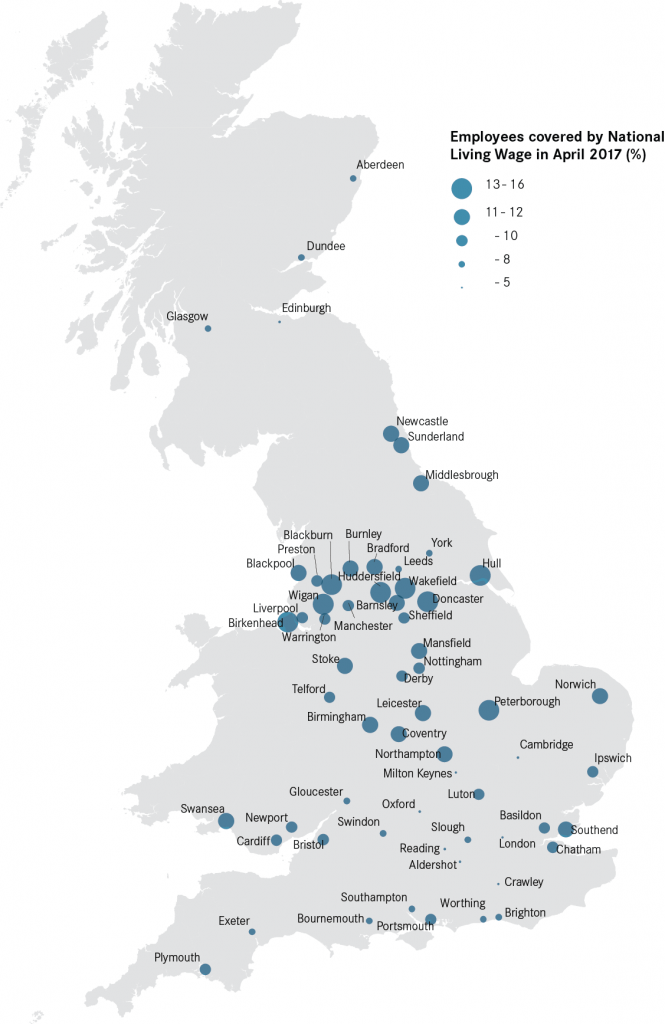 Corbyn’s pledge to increase the national minimum wage to take account of costs of living would have a much larger impact everywhere, for two reasons. Firstly, the level would be higher and, secondly, it would be extended to include 18 to 24 year olds.

The proportion of workers earning the minimum wage in Oxford would rise from one in 40 to one in eight. But again the impacts are likely to be much more significant in some areas compared to others. In Doncaster, where one in seven workers currently earn the NLW, coverage would rise to over a third under Labour’s plans – virtually turning it into a one wage city. 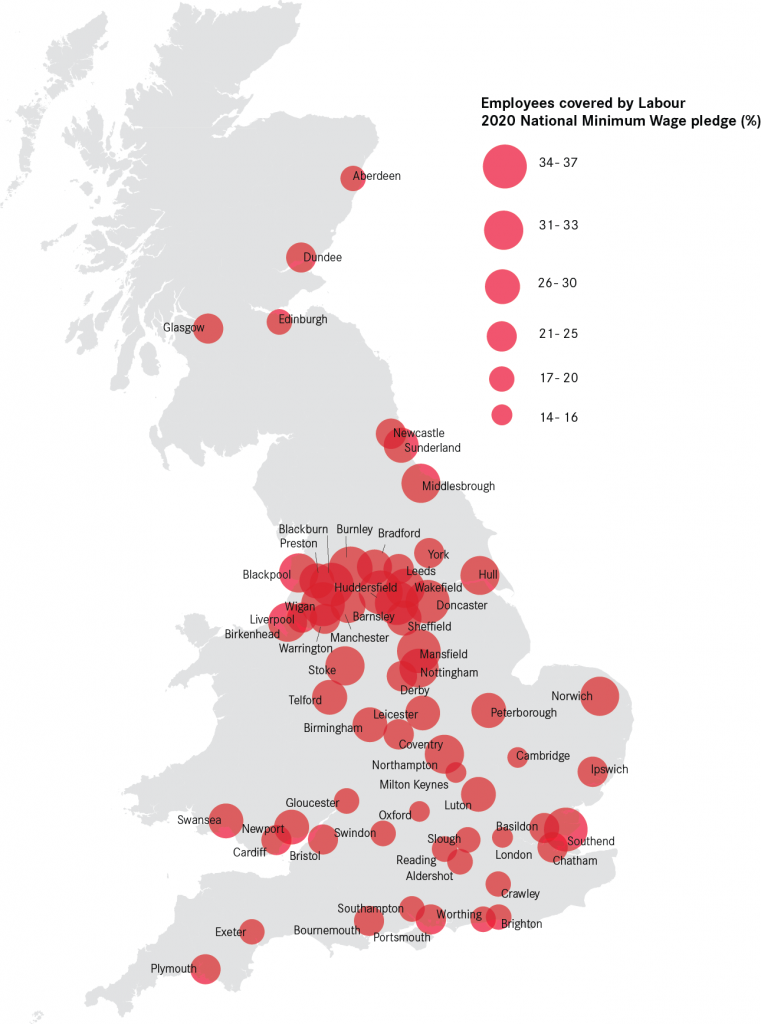 Source: Annual Survey of Hours and Earnings, 2017 and OBR March 2017 forecasts. Note: coverage will be slightly over-estimated as figures include 16 and 17 year olds.

In some cities, the cost of these increases may be too large for employers to bear and low wage workers could face a reduction in their hours or redundancy as a result. Cities like Oxford where those on the minimum wage make up a lower proportion, can much more easily bear the cost than cities like Hull.

Increasing wages in a sustainable way in low pay cities means accompanying the minimum wage with policies that support businesses to pay higher wages.  This means investing in education, training and infrastructure in these places in ways that improve businesses’ access to markets, suppliers and the skills they need – and that ultimately creates an environment for businesses to thrive.

At the other end of the spectrum, even with Labour’s proposed increases to the minimum wage, rising costs in our most expensive cities mean that its impact on low earners will be limited. Over the last five years, average house prices in London have increased from 12 times average wages in 2011 to 16 times in 2016.

So a single level wage floor would on the one hand make the standard of living high in Doncaster, where the cost of housing in particular is much lower – but it would not support higher standards of living in those cities where housing costs are far past the wages of many people, and not just those earning minimum incomes.

This is not necessarily an argument for introducing regional minimum wages but, as we’ve argued before, the Low Pay Commission could play a role in assessing where the floor could be set in high wage cities, like London, without impacting on employment, as a way of encouraging higher wages where employers can afford it. More generally, it reinforces the need to introduce other measures designed to reduce the cost of living, whether it be increasing housing supply or reducing the cost of transport and childcare.

Wage stagnation is undoubtedly one of the biggest challenges facing the next government. Without recognition of the different challenges facing different cities and an approach to policy delivery that reflects this, the risk is that the most expensive places will become increasingly unaffordable for low paid workers, while in others their employment opportunities may be reduced.