Following last week’s release of A-level results, this week it’s the turn of those who sat their GCSEs this year.  No doubt the main news will be filled with stories of record pass rates, beaming students and accusations of dumbing down. But very few headlines will talk about the variation in results by places – yet this is one of the unsung stories of GCSE results.

One of the main reasons for sitting these exams – rather than just attending the lessons to glean the knowledge – is to help a pupil to get a job. Said pupil may go on and do A-levels first, and then perhaps go to university. But ultimately the vast majority will be using the qualifications they have gained to demonstrate to an employer that they should be taken onto the pay roll. Unfortunately too many pupils are failing to do well in the subjects that will be most helpful to gaining employment – and, as we’ve shown in previous research, this appears to be all the more acute in places that struggle economically.

Two main findings came out of our research into educational attainment across cities. Firstly, despite seeing huge improvements in the number of pupils gaining 5 A*-C since 1997 – closing the gap between themselves and cities with stronger economies – cities with weak economies have seen much more modest improvements when this metric includes Maths and English. This suggests that pupils in weaker city economies in particular are more likely to do ‘softer’ subjects over core subjects such as Maths and English. This results in schools moving up the league tables but not necessarily in pupils gaining the subject qualifications they need to do well in the workplace. 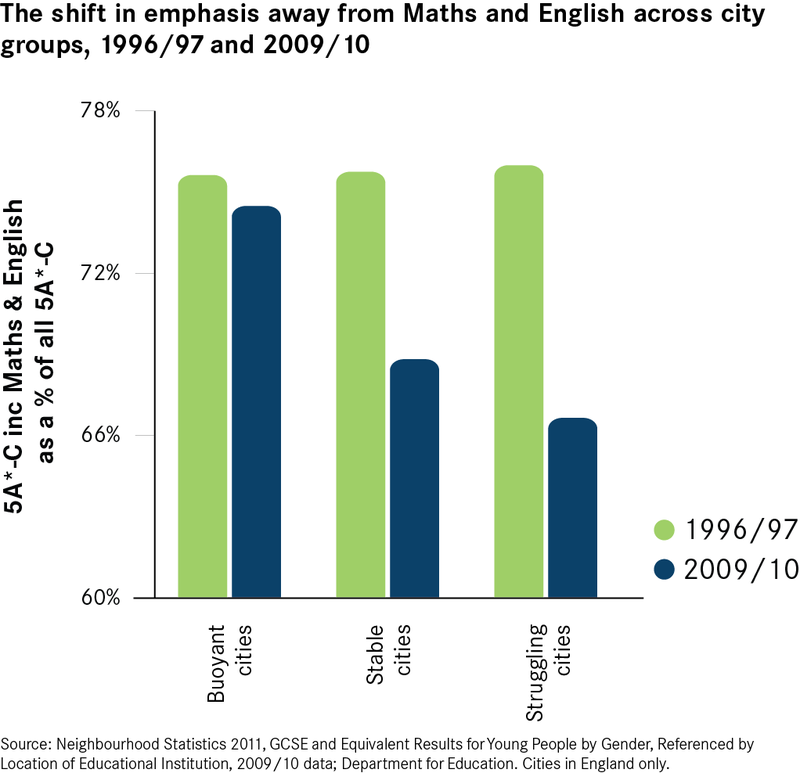 Secondly, despite large increases in overall GCSE attainment there has been very little improvement in the number of pupils gaining at least one A or A* grade. One explanation is that schools may be focusing on pushing pupils over the D-C borderline, which improves their performance on the 5 A*-C metric, rather than encouraging high attainment. The school league tables certainly create a clear incentive to do this – turning a B grade into an A grade has no impact on the 5 A*-C attainment measure. 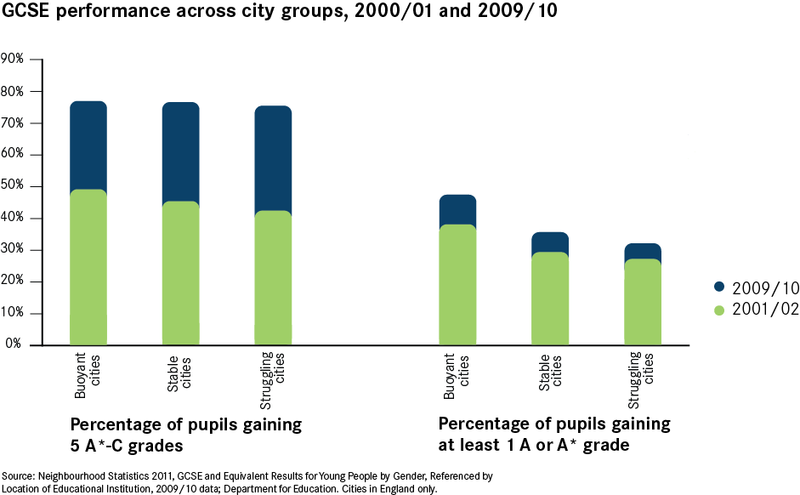 Why does this matter? Well it all comes back to the importance of our education system in helping you attain skills in order to get a job. Two key skills required by businesses are numeracy and literacy skills. Not only is this widely accepted in the literature, but we also find that those cities with poor 5 A*-C attainment at GCSE including Maths and English tend to have higher rates of youth unemployment (note that there is no relationship between youth unemployment and general GCSE attainment). 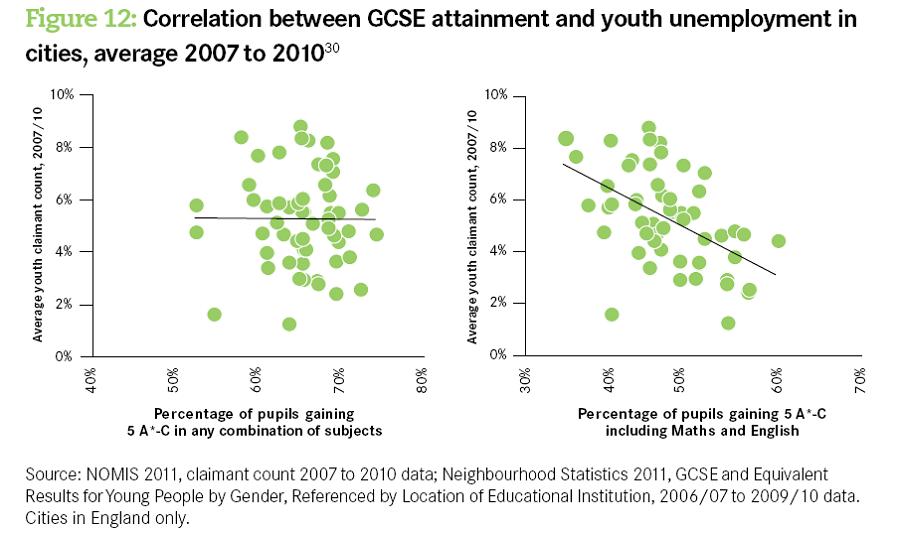 Schools in weak city economies in particular seem to have improved their positions in school league tables, but not when it comes to Maths and English attainment, which matters most for getting a job. Unfortunately this behaviour is only likely to reinforce patterns of economic performance. Skills matter for economic growth. Cities with weak economies tend to have poorer skills levels and poorer levels of educational achievement. If people living in those cities are less likely to gain the skills that are most important for employment and economic growth, we find ourselves in a vicious circle where poor educational attainment compounds the divergence in economic performance we see across our cities.

The Government has taken some steps to change incentives within the school system but more needs to be done to tackle this fundamental problem of educational attainment being least good in cities where the economy is also performing least well. While this week’s headlines will undoubtedly continue to focus on overall pass rates, as the dust settles it is vital that all cities, but especially those with weaker economies, focus much more on pass rates in core subjects such as Maths and English. League tables that more explicitly take this into account would be a good first step.