In the past 24-hours, both the latest figures on the Coronavirus Job Retention Scheme and claimant count data have been released, providing additional information on how the economic impact of the pandemic is playing out across the country.

There are three main points to take away from these releases for the largest cities and towns in the country.

1. The number of claims for the Job Retention Scheme has continued to rise, with great disparities in take-up across the country

Yesterday HMRC revealed that, as of the last day of June, approximately 9.4 million workers in the UK have been placed on furlough, up by 678,000 compared to the same time in May.

Despite the reopening of non-essential shops and the relaxation of some lockdown rules, over the last month, every city and large town has seen new claims for the take-up of the scheme. In 12 cities, the increase corresponded to over 5 per cent of the population eligible for the scheme, with Swindon and Slough seeing the largest increases.

The percentage point change in claims for the scheme tended to be higher in places where take-up is highest, but with some exceptions. Bristol, Oxford and Cambridge for example saw above average increases in claim in the last month, but continue to have a relatively lower level of people on the scheme. In contrast, in Blackpool, Hull and Wigan, claims increased less quickly than the city average, but these places are still among the most reliant on the scheme. 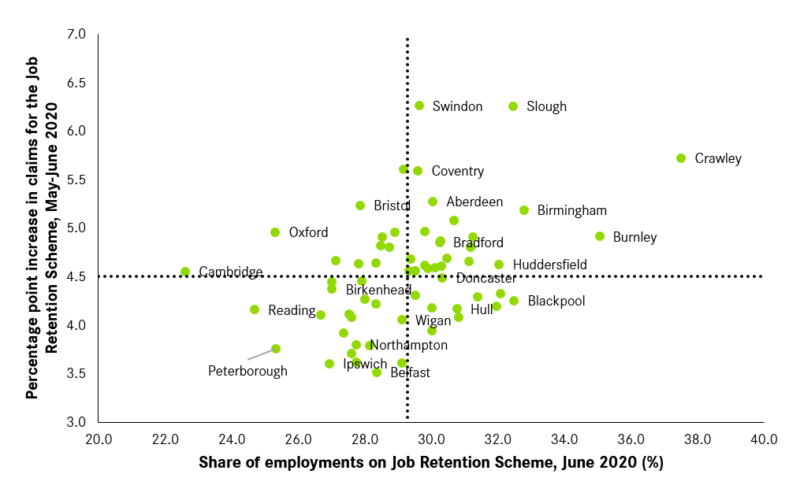 As a result, the share of overall workers supported by the Job Retention Scheme since March in Crawley (37.5 per cent) is almost double that in Cambridge (22.6 per cent), with Burnley, Birmingham and Blackpool also having high levels of take up for the Job Retention Scheme. In contrast, in Reading, Oxford and Peterborough fewer businesses are making use of the scheme. If Andy Haldane’s reflections last week that the UK will see a V-shaped recovery are correct, it will most clearly be seen in these cities. 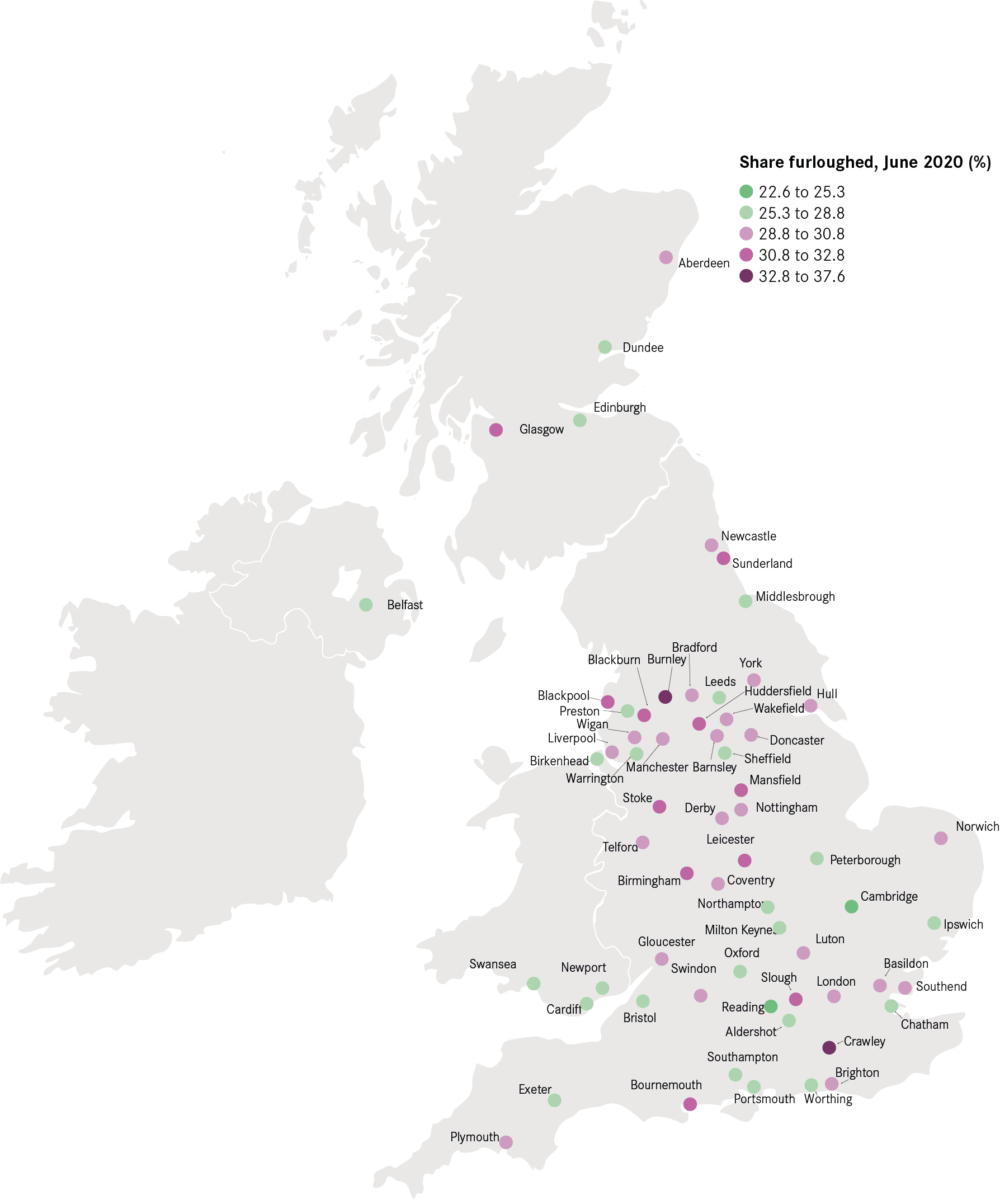 2. The number of people claiming unemployment benefits have stayed mostly stable compared to last month, and continues to be higher in weaker economies

Data published today by the Office for National Statistics surprisingly suggests the number of people claiming unemployment related benefits in the past month has actually decreased slightly compared to May.

There has been little month-by-month variation across the largest cities and towns too. In Aberdeen, the city which saw the biggest monthly increase in the number of people claiming unemployment benefits, the claimant count increased by 0.3 percentage points compared to May. In Worthing instead, the cities which saw the biggest monthly decrease in claims, the claimant count decreased by 0.4 percentage points.

While the figures of the past three months are certainly slightly inflated by changes in the eligibility for benefits and the surge in claims by self-employed people at the beginning of the pandemic, these figures still help understand which places are being hit hardest by the crisis. 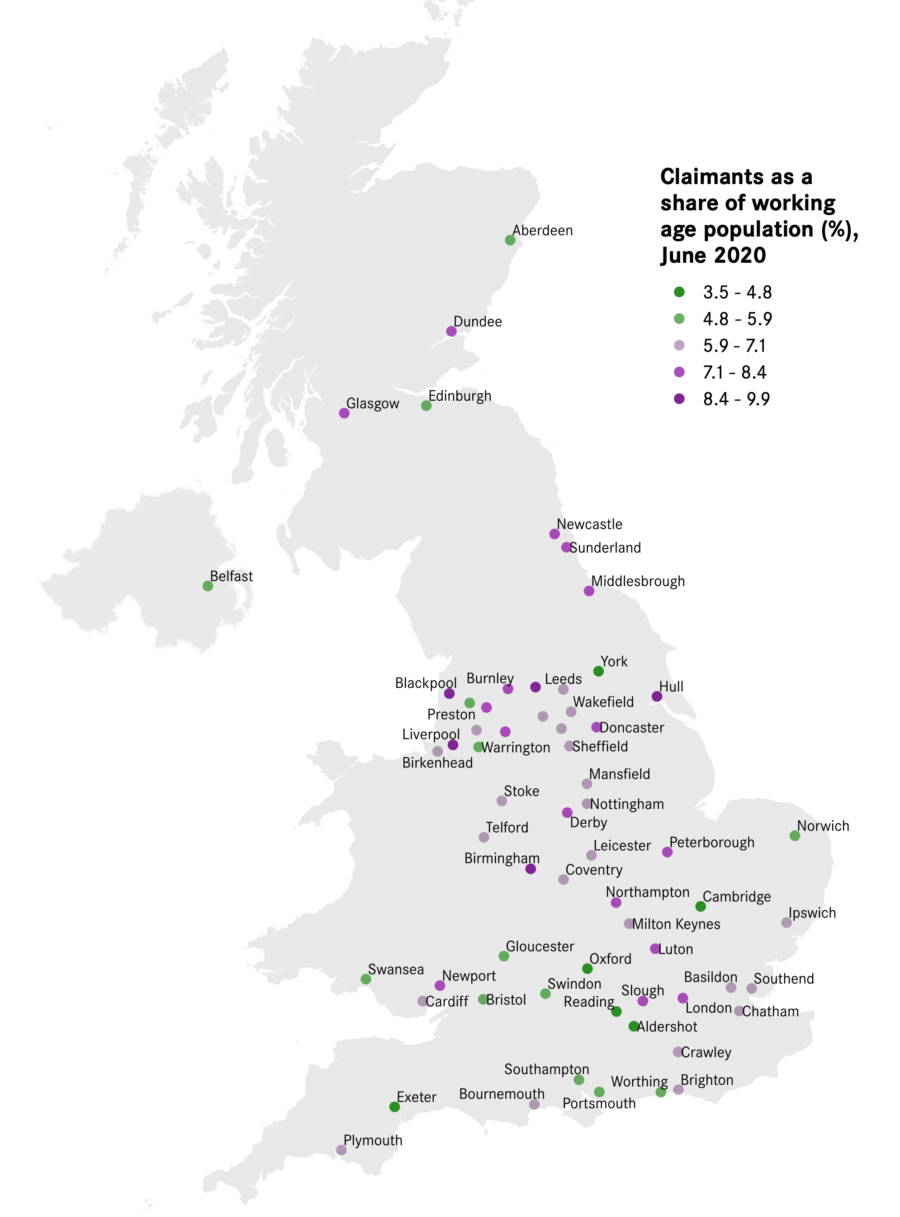 3. The Job Retention Scheme data and the claimant count are linked in complex ways

However, there are a few exceptions. As the bottom right quadrant in the figure below suggests, a number of places are experiencing an above average level of claimant counts, but lower than the average take-up of the Job Retention Scheme. These include places like Peterborough, Middlesbrough and Liverpool. This suggests that, while these places currently have above average levels of unemployment claims, they might not experience as large of a spike in unemployment when the Job Retention Scheme is phased out as the cities in the top right quadrant. 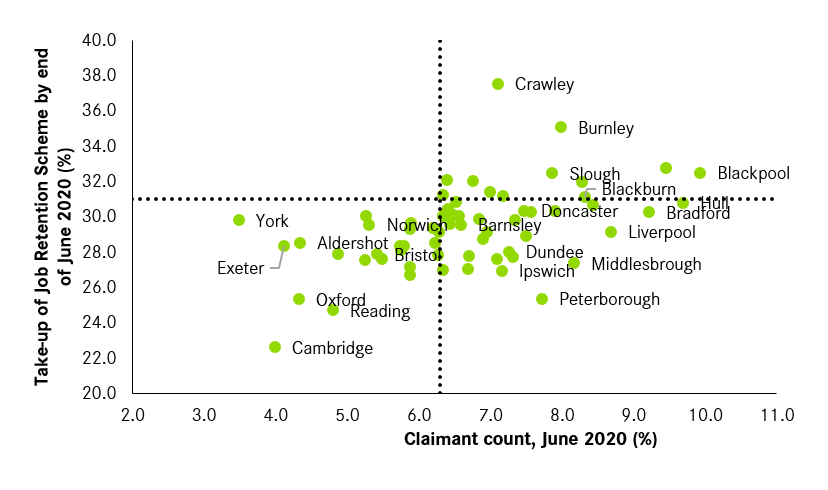 Coronavirus Levelling up The Future of Work
Devolution Future of cities Levelling up
Conservative Party Conference: How do we level up health inequalities across the UK?