Housing Minister Grant Shapps announced the second round of New Homes Bonus allocations, and the numbers are neither surprising nor telling. Analysis shows that it is too early to know whether the incentive scheme will bring forward more homes in Britain. More importantly, there is no evidence yet that those places which need the incentive the most are building more.

Our previous work on the NHB in Room for Improvement set out the key issues with the incentive. We estimate that the NHB will increase the housing supply by 6 to 16 percent (see figure below). This is not enough to raise house building to the level needed or to deliver enough homes in the places with the highest level of demand. 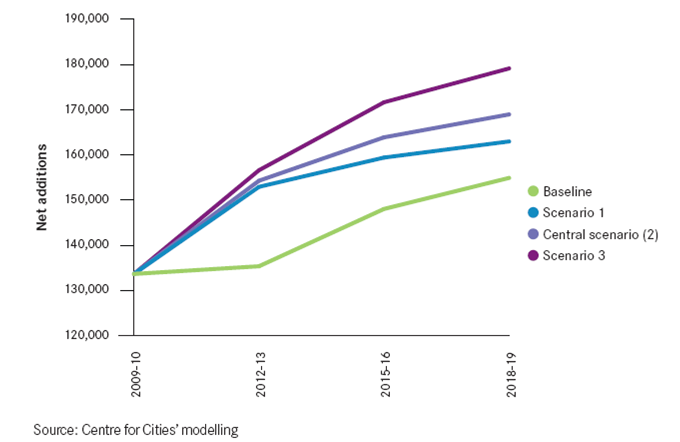 Local government, though, hasn’t yet had a chance to respond to the incentive. The NHB only came into effect in February of 2011. This is not enough time for local authorities to create new planning schemes, housing builders to bring forward new developments, and the houses to be finished. Despite payments going out to local authorities, the earliest we should expect to see a noticeable impact of the NHB will be next year’s payout.

Just over half of the UK’s cities saw an increase in their NHB allocation for 2012. That means that many cities (like Birkenhead, Portsmouth and Preston) increased the rate at which they built new housing, even before the incentives of the scheme have had an impact. However, half of cities (including Bradford, Nottingham and Brighton) saw declining house building rates. When the incentive’s effects can be seen, it will likely be in those cities on the margin (such as Sunderland, Leeds and Reading) which have steady house building rates since the NHB was announced.

We are keeping one eye on the NHB to see what might come out of it. While we wait, we reiterate that the NHB it is not big enough to encourage local decision makers to address housing affordability issues and build more housing. Specifically, the incentive is not strong enough to target those places that need to grow the most—with the highest housing prices and which are most resistant to development. Additionally, its small size relative to business rates retention could encourage commercial development over residential. Looking forward, we have to manage expectations of what the NHB will deliver.