Unemployment at the national level is showing tentative signs of stabilising; helping to allay fears about a double dip recession. Yet both the wider measure of unemployment (ILO unemployment) and the claimant rate (this information will be available on our data app shortly) are still up on last year, and there has been a large increase in part-time work.

Recession and recovery – changes in unemployment 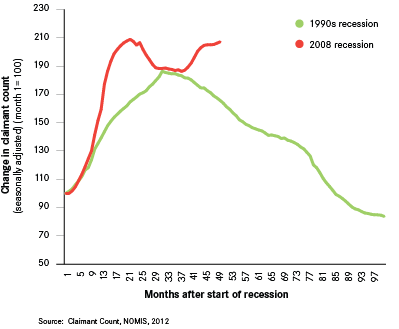 So what’s different this time around? Unemployment figures have undoubtedly been driven up by the 270,000 jobs lost from the public sector over the last year, but the 1990s recovery also saw large scale public sector redundancies. The main difference between now and then is that the 1990s recovery was accompanied by much stronger economic growth and, as a consequence, private sector job creation.

Recession and recovery – changes in GDP 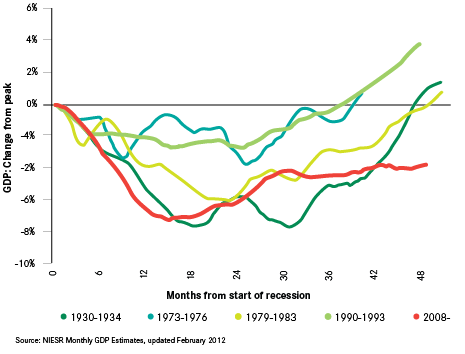 No city is close to seeing unemployment return to pre-recession levels; in the majority of cities claimant rates remain twice as high as rates at the start of the recession. But recessions and recoveries are always uneven. For example, some cities are much more vulnerable to public sector job losses because of their greater dependence on public services for employment, and as a result unemployment is likely to remain much higher.

Take Hull and Reading for example, as highlighted in this month’s labour market update. Four years on from the start of the downturn in the 1990s, unemployment had been falling in both cities for over a year and it continued to do so at a steady rate until it fell back to pre-recession levels. Today, neither city has seen a significant fall in unemployment since the start of the downturn four years ago. But while rates have been relatively stable in Reading, unemployment in Hull is back on an upward trend, suggesting it is less resilient in the face of public sector cuts and global economic uncertainty. 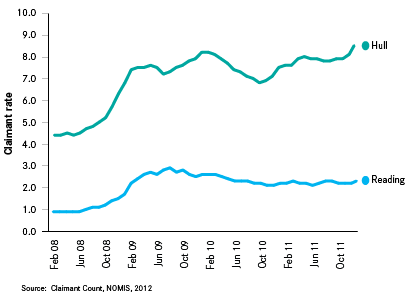 Next week’s Budget statement is an important opportunity to bolster the UK economy and get it more firmly on the road to recovery. But many national policies continue to be ‘spatially blind’, despite the fact that that cities face some very different challenges. There is a real opportunity for the Chancellor to use next week’s budget to give cities the financial resources and powers they need, not just to stem local unemployment rises but to drive the recovery for the UK as a whole.