What is the point of urban planning? To answer this question we need to look at why people cluster in the small parts of the country in which land is scarce and expensive.

Cities make up 54 per cent of the population and 60 per cent of jobs, but only 8 per cent of the UK’s land. As a result, the decisions we make about how to use valuable land in cities – and how we make those decisions – have an outsized effect on national productivity and the economy.

Planning, therefore, has an important role to play in coordinating economic activity in cities and ensuring city land is used efficiently. This thinking was at the core of our response to the Government’s draft National Planning Policy Framework (NPPF).

In it, we stressed four reforms the Government should make to bring planning back into balance in cities – that is, to ensure it meets the commercial, residential, and environmental and transport needs of urban areas:

In combination with our recommendations, these changes would result in a planning system that is much more focused on supporting economic growth within places. Read on for more detail on each of the recommendations:

The NPPF clearly states that planning should help to drive local productivity by aiming to create conditions for the growth of businesses and the local economy.

But while it includes a long section on how planning should recognise the needs of the rural economy, an equivalent for cities is absent. This is a missed opportunity because the failure of planning to release enough land for development is most acute in cities.

To tackle this, we’ve argued that the Government should issue specific guidance in the NPPF on how planning can assist economic growth in cities. That means, for example, ensuring high knowledge business services have the space they need in city centres to capture the benefits from agglomeration economies.

The economic growth of cities should be central to any national planning framework.

Cities themselves have also changed since the last NPPF was finalised in 2012, most notably with the creation of metro mayors in seven city regions across England (eight including the North of Tyne). However, only some of them have spatial planning powers – and the mayors of Tees Valley, West Midlands, and the forthcoming North of Tyne authority all lack the ability to lead on planning within their city.

These spatial plan powers should be devolved to the remaining metro mayors as soon as possible. But this is also an opportunity for the Government to think about the future of devolution and these new institutions. Ideally, the largest cities with devolved institutions should have full control over their planning policy through documents such as the London Plan and the Greater Manchester Spatial Framework, rather than sharing power with the NPPF.

Instead of writing planning policy for cities, the Government should set the terms within which cities can write their own planning policy framework. In particular, the Government should represent people who want to move to or between cities. Plan-making at present goes to great lengths to involve local residents but struggles to capture the interests of people who may choose to live there in future. Giving cities the freedom to plan, while ensuring that they provide for new residents, would maximise devolution’s ability to drive local economic growth.

Although the NPPF proposes minimum densities around “transport hubs” (which remain undefined), the Government should go further by stipulating that all land within a 1km radius of train stations should have minimum densities for new housing.

That doesn’t mean Hong Kong-style high rises but could mean old-town style neighbourhoods with narrow streets, or the kinds of 6-storey flats we see in Maida Vale (the densest neighbourhood in the UK). These “button developments” would create walkable communities with minimal new infrastructure, in contrast to “ribbon developments” along roadsides. The amount of land given over to cars (both for parking and on roads) should be minimised so that the new housing can support public transport and vice versa.

In addition to more homes, dense housing near train stations has an extra benefit for the environment. Building homes near stations makes commuting by rail or metro easy, reducing journeys by car and carbon emissions. More dense housing near public transport is essential for the UK to meet its legal target of a 57% reduction in carbon emissions by 2030 and an 80% reduction by 2050 while sustaining economic growth in cities.

Releasing land for “button development around stations will require reform of the green belt, which is why we’re supporting the cross party coalition pushing for green belt reform around train stations led by Siobhain McDonagh MP. But a wider review of green belt land is needed to ascertain other sites which may be suitable for housing.

In the draft NPPF, the Government said that brownfield land on the green belt was in certain cases suitable for development, agreeing that not all green belt should be equally protected.

Given that the green belt is a major obstacle to supplying more homes around high demand cities, this is a welcome recognition but needs to be developed further. The uniformity and inflexibility of the green belt’s restrictions is the central problem with the policy because the suitability of green belt land for new housing varies so widely. 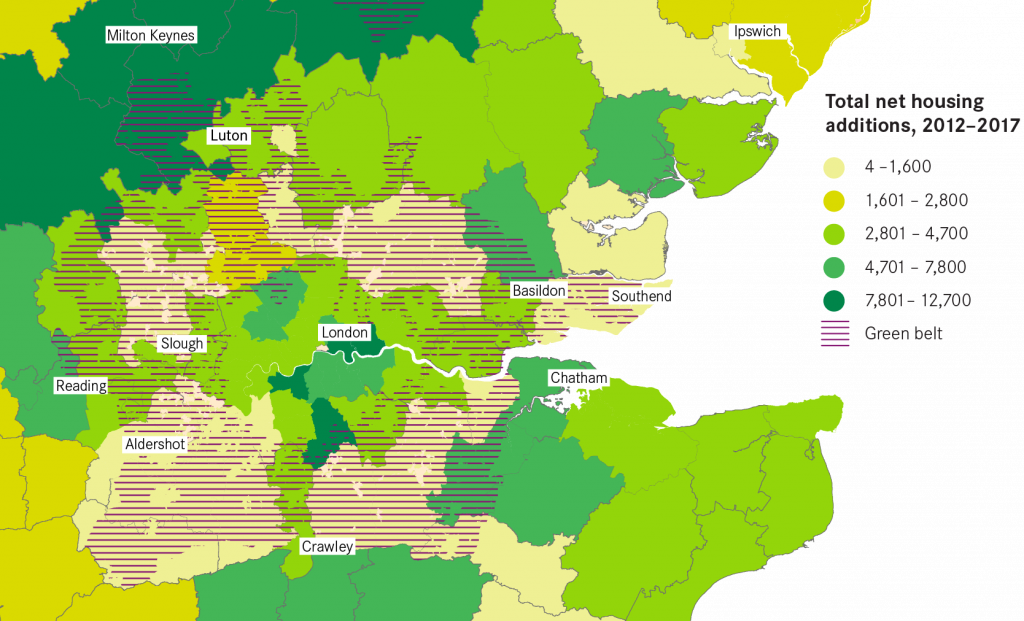 The Government should, therefore, conduct a strategic review of green belt land to assess whether designations first applied over fifty years ago are still appropriate today. This review should grade green belt land according to the suitability for new homes, prioritising land near train stations for ‘button development’ as outlined above.

This would this improve the evidence available on the quality of green belt land. It would also enhance protection for our most precious countryside and landscapes, and help local communities develop consensuses on sites for new housing.

This would allow planning to more effectively balance the different interests within cities as part of planning’s role to coordinate economic activity than the current inflexible green belt definition. After all, belts are supposed to be loosened if they become too tight.

One drawback of the NPPF is that it doesn’t tackle systemic problems in English planning – for example, the fact that each new development requires discrete planning permission.

This increases opportunities for local ‘Nimbys’ to oppose new housing and reduce supply. As almost nobody ever lobbies their local councils calling for more housing (although Yimby groups are starting to change that), a system of planning permissions ratchets the supply of housing downwards.

That’s why planning permissions should be replaced with a rules-based system, by which local authorities work with communities to create a plan stipulating where and how housing can be built by developers (in other words, zoning). This would ensure that housing decisions are still democratically agreed by the community, while reducing uncertainty, delays, and therefore costs to building more houses.

The reforms we’ve proposed would complement some of the changes to the planning system which already feature in the draft NPPF. These include the new method of calculating housing need based on local affordability, removing powers to block new housing from local authorities that don’t supply enough homes, and the push for more Build-to-Rent housing.

If the Government acts on our recommendations in combination with the improvements that the draft NPFF set out, these changes could lead to a planning system which is much more focused on supporting economic growth within cities.