‘MPs criticise strategic bias towards innovative sectors’ read the headline of the FT article covering the launch of the BEIS Industrial Strategy Committee’s report on the Industrial Strategy earlier this week. This reflects a broader confusion that seems to have pervaded discussions about the industrial strategy in recent months. And it threatens to derail any positive impact the strategy may have.

The purpose of the Industrial Strategy is to tackle the UK’s lagging productivity. While we have reservations about a sector approach to the strategy, given that innovation is the driver of long-run improvements to productivity, an approach based on innovation would seem pretty fundamental.

So why do conversations turn instead to the ‘everyday economy’ such as retail and hospitality? The reason is twofold. The first is that they tend to have low levels of productivity, so are perceived as dragging overall productivity levels down. And the second is that they employ a lot of people.

Neither, though, is justification for them to be front and central of any efforts to address the UK’s poor productivity. This is for two reasons.

Productivity is instead driven by sectors that are able to absorb innovations. This is why since 1990, productivity in information and communications and manufacturing of computers and electrical equipment has more than doubled and has almost trebled in chemicals and pharmaceuticals, while in arts and recreation has actually declined. 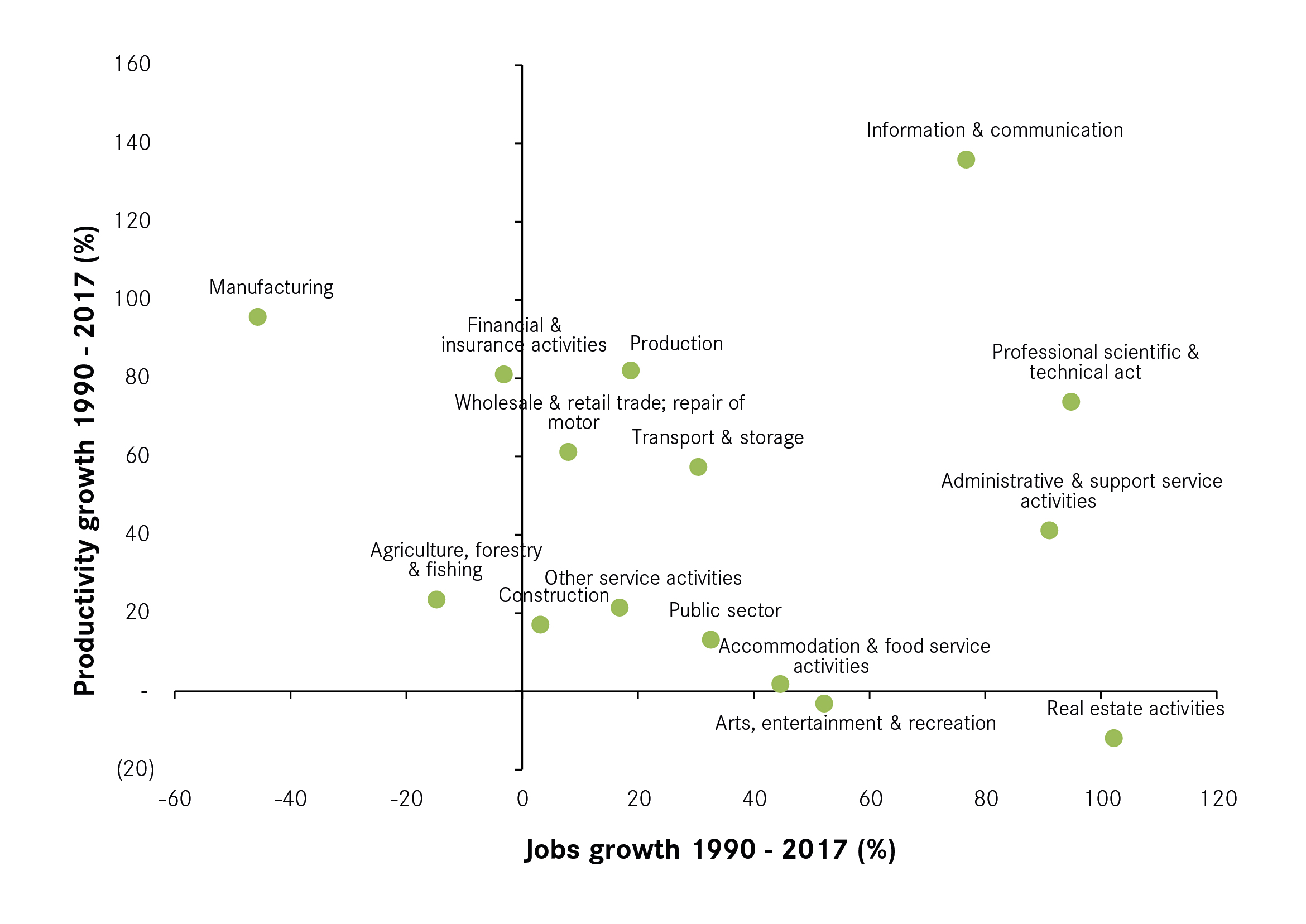 The second reason is that indirectly these sectors do create jobs. And they create them in ‘everyday economy’ activities. By becoming more productive and in turn increasing wages of their employees, the more innovative sectors push up demand for things such as cafés, bars and restaurants, which creates jobs in these industries. In our most recent research, we estimated this multiplier effect created 11 jobs in lower-skilled local services jobs for every 10 created in more productive activities in cities.

This means that a focus on innovative sectors, using the terminology from the FT headline, is of benefit to ‘everyday economy’, rather than ignoring it.

Whether workers in these sectors benefit in terms of higher wages, rather than just more jobs, isn’t clear. But this isn’t a productivity issue. It’s a labour market one. And so it raises questions about the definition of workers’ rights and minimum wages. This is all important stuff. But it falls outside of the remit of an industrial strategy.