Each year Cities Outlook offers a health-check on the UK’s 63 largest city economies, and this year’s edition features a new benchmark: how levels of equality vary across different cities across the country.

One of the measures economists use to gauge inequality is the Gini coefficient, which determines equality on a scale from 0 to 1 – with zero representing perfect equality, and 1 representing extreme inequality. New experimental data from the Office of National Statistics has allowed us to construct a Gini coefficient for every city in England and Wales.

Using this measure, Outlook reveals that Burnley, Mansfield and Stoke are tied for the title of most equal city in the UK. At the other end of the scale, Cambridge is the UK’s least equal city, followed by Oxford and London. 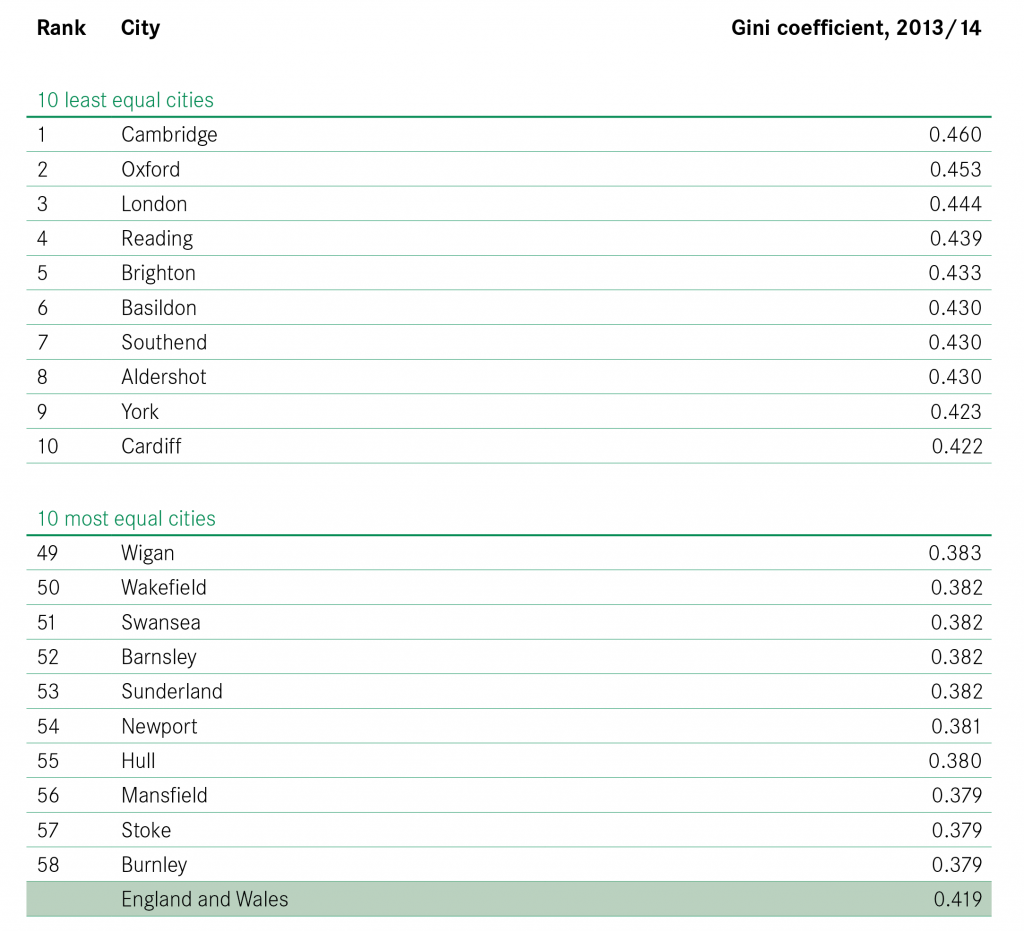 The most striking finding from this is how the Gini coefficient relates to wider economic performance. Looking at the cities at the top and bottom of the spectrum, we can see that places which have the strongest economies are the most unequal, while those with some of the weakest economies tend to be most equal. For example, if we look at unemployment (as measured by those claiming unemployment benefits) compared to the Gini coefficient, we can see that cities which have high levels of inequality have low unemployment, while in more equal places average unemployment is high.

This raises an important question which is highly relevant to the growing debate about inequality and ‘inclusive growth’ – what is the most important issue that the UK should address to help the poorest and ‘least included’ in society?

Alleviating poverty should, I would argue, be a top policy priority for national and local leaders, and there are many policy prescriptions that flow from this that we should be considering. But our findings suggest that the case for policy focusing on trying to reduce inequality is much less clear cut. Our most successful places are more unequal because they have such successful components of their economies. Cities with weaker economies, on the other hand, are likely to be more equal precisely because they lack these components – so while levels of income are more even, they are also lower overall than in more economically vibrant places.

If the policy focus is on reducing inequality, it’s entirely possible to end up arguing that it is better for a city’s residents to be poorer but more equal, than to be more unequal but wealthier overall. But should that really be the ideal outcome of policy?

As the debate about inequality and inclusive growth develops, we need to ensure we are clearer about what tackling inequality really means and what a desirable end result looks like. Our data suggests that boosting economic growth is the most effective way to increase job opportunities and income – and to tackle poverty – in the UK’s poorer cities, rather than trying to sustain their position as one of the most equal cities. In our most successful cities, where inequality is a bigger problem, dealing with the costs of growth, such as unaffordable housing which will hit the poor the hardest, should be the top priority.

We’ll be doing more work on how inequality relates to other economic indicators at the city level in the coming weeks, so keep an eye out for that. In the meantime you can explore the Gini coefficient and other city data on our data tool.

Finally, it’s worth noting that these figures come from one of ONS’ experimental data series. The ONS is increasingly using experimental statistics in its approach to broadening the amount of data at the sub-national level. In our view this is very welcome and we look forward to seeing further experimentation as the ONS looks to increase the amount of local data it makes available.