The Northern Powerhouse initiative was launched by the Government to address a North/South divide in the UK that is at least a century old. At its heart is the idea to make the most of the scale of the North, by better linking it together through transport improvement, creating one single economy that can compete on the global stage.

The Government has held up the Randstad area of Holland and the Rhine-Ruhr area of Germany as examples of areas that perform well because of strong intercity links, but there is little evidence that either region operates in this way. As such, the task of our latest paper Building the Northern Powerhouse was to test this hypothesis. Five findings come out from the work:

Fact 1: The Randstad and Rhine-Ruhr are more productive than the Northern Powerhouse, and this is driven by their cities

Both areas are more productive than both the North of England and their respective national averages, justifying the attention that policy-makers have given them. When adjusting for varying costs of living, each worker in the Randstad and Rhine-Ruhr produces £62,000 and £56,000 respectively, compared to £45,000 in the North of England.

What is key here is that it is cities in the Randstad and Rhine-Ruhr areas that drive their wider regions forward. This is not the case in the North, where cities lag behind in terms of productivity, when they should be the major contributors.

Fact 2: Commuting links show city regions to be distinct, rather than operating as part of a larger, single economy 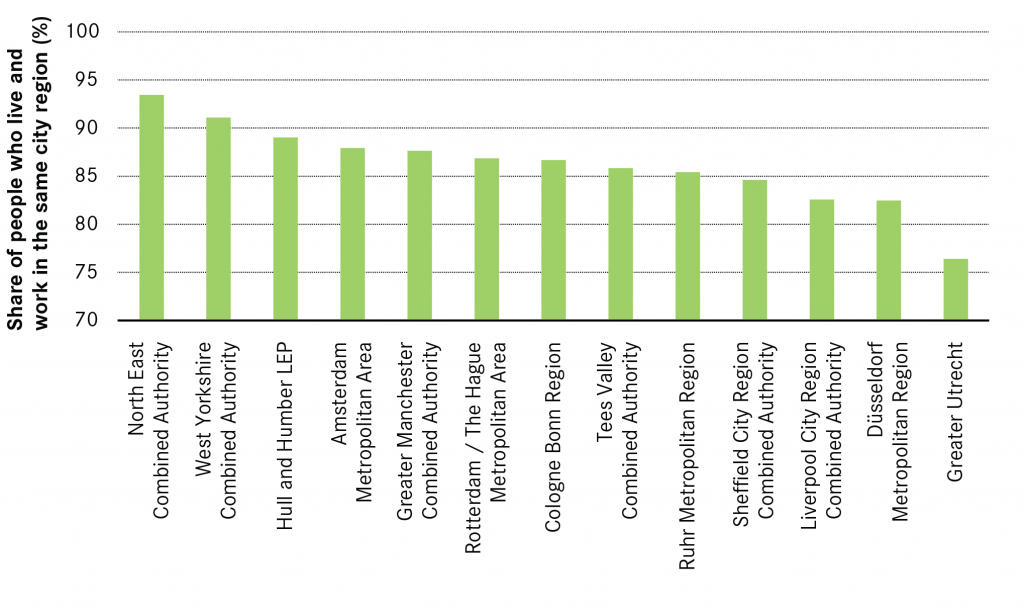 Fact 3: Public transport usage is similar across the three areas, but the modes used are different

Public transport usage in the Randstad and Rhine-Ruhr by commuters tends to be very similar to the North. It’s also relatively low. Usage ranges from 7 to 19 per cent of residents across the Northern, Dutch and German city regions, compared to 45 per cent of London residents who commute by public transport.

Fact 4: It is frequency, rather than speed, that separates the rail networks

Much of the emphasis on improving the rail network across the North of England has been about improving speed. But speeds in the Randstad and Rhine-Ruhr don’t tend to be a great deal faster than in the North, and some connections are slower than the slowest big city connection in the North. The big difference instead is frequency – the most frequent service we found between the hours of 8am and 9 am was the 12 trains that ran from Duisburg to Düsseldorf. 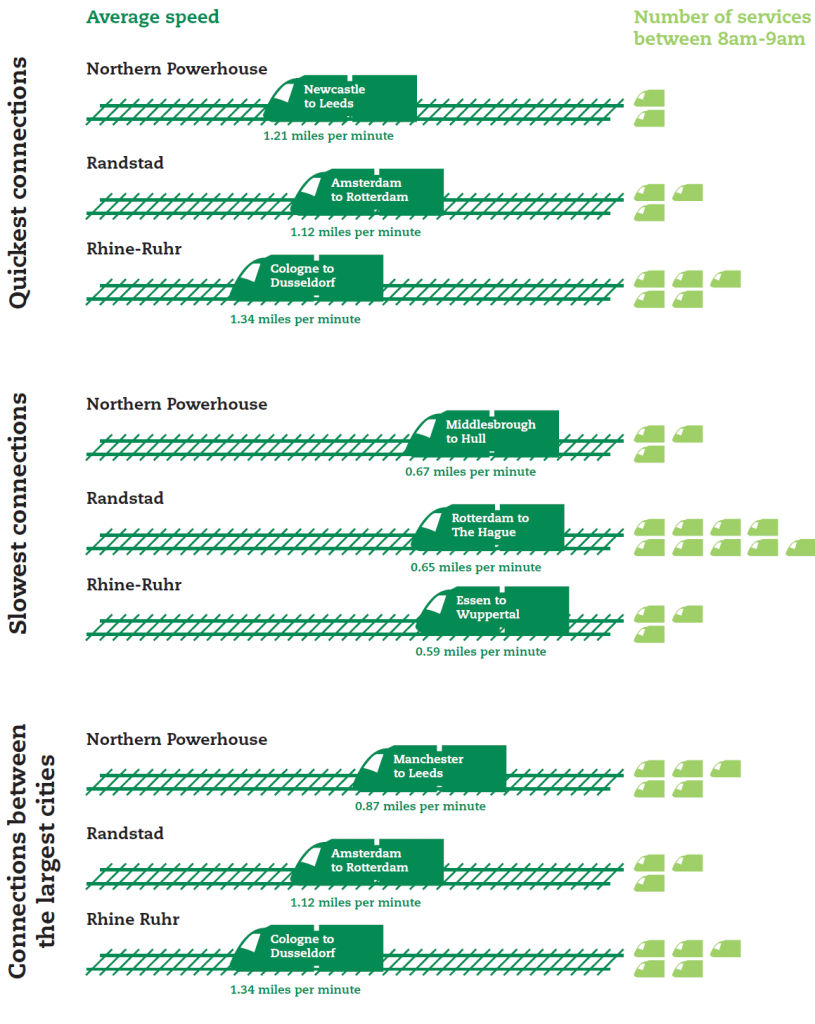 Fact 5: Neither the Randstad or Rhine-Ruhr have institutions that plan or manage activity or investment at this scale

Another popular focus of the Northern Powerhouse initiative has been the desire to set up pan-Northern institutions. So it’s interesting to note that neither the Randstad or the Rhine-Ruhr appear to have any history of having a sub-regional body in charge of some element of economic policy, nor has there ever been a formal plan drawn up for either area.

Much has been made of the need to make the most of the North’s combined scale to make it more competitive with other regions around the world. But it’s not just scale that is important; it’s the concentration of this scale in particular places that is important. This is what is known as agglomeration.

A key reason why the Randstad and Rhine-Ruhr areas perform well is because they have productive cities at their heart. It’s for the same reason that the North underperforms – its cities punch well below their weight.

So the key lesson from the Randstad and Rhine-Ruhr is not about their transport connections, but about the strong performance of their cities. If the Northern Powerhouse initiative to be successful, it needs to focus on getting the North’s cities firing again. If it doesn’t, then the North is likely to continue to struggle in future decades as it has in the previous ones.