What are your choices for lunch today? Chances are that if you live in one of the least affluent parts of the country, fast food outlets are going to make up a large part of the choice on offer.

These differences matter for people’s health outcomes, and PHE has urged local authorities to take action to reduce the number of fast food joints in their areas and to promote uptake of more healthy food options.

But what does the data tell us about cities? As in many other aspects of British society, the research shows that there is a clear North/South divide when it comes to fast food distribution in cities. With 196 fast food outlets per 100,000 population, Blackpool is top of the league in terms of its fast-food offering, followed by Hull and many other northern cities, but Ipswich is the only city in the Greater South East featuring in the top 20. In contrast, Swindon and Oxford have less than half as many fast food outlets as Blackpool, with less than 80 fast foods per 100,000 people. 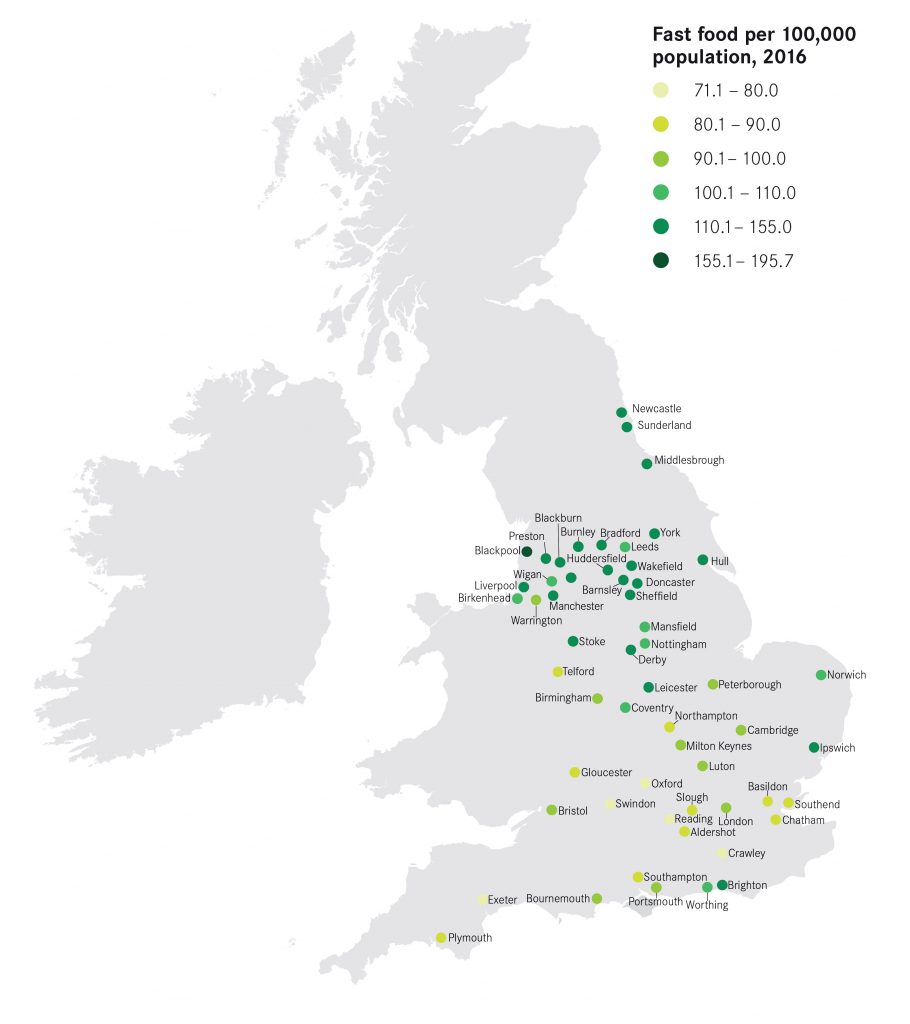 And reflecting the findings from PHE on deprivation, it is clear that the places with the lowest earnings have the highest density of fast food restaurants. For example, Huddersfield and Burnley are among the top ten cities for both share of junk food eateries and the lowest average weekly workplace earnings. At the other end of both scales,  Crawley, Slough and Reading are all in the top 10 for earnings but the bottom ten for fast food outlets.

Setting aside for a moment the very serious health concerns associated with fast food consumption, this data gives us interesting insights into the type of amenities cities offer. We often tend to think of cities as places of production, but they are also places of consumption: where people want to live, visit and play.

In many northern cities, fast food outlets play a much larger role in the overall amenity offer of these cities than those further south. This raises a bunch of related questions, such as how does this reflect the wider amenity offer in these places? How is this different in southern cities? And how is this linked to the strength of the ‘production’ role of a city?

We’ll be addressing these questions in a new report late this year – watch this space for more details.