The prospect of finding better-paid work often pushes people to move from one place to another. But does moving have the same impact on earnings progression everywhere in the country? New experimental data released recently by the Office for National Statistics (ONS) on earnings progression and geographic mobility for young people allows us to explore this issue further. To mark Living Wage Week, here are the five most interesting facts about the release and their implications for cities.

85 per cent of young people aged 18 to 29 did not move between 2012 and 2016, and, among them, those who stayed in successful cities have been more likely to see the biggest growth in earnings. In London, earnings for young non-movers increased on average by 9.5 per cent over that period and, in Aldershot, the increase was nine per cent.

In fact, all the cities with the highest increase in earnings are cities which, at the start of the period, had more high-skilled exporting jobs, jobs driving productivity growth and living standards. 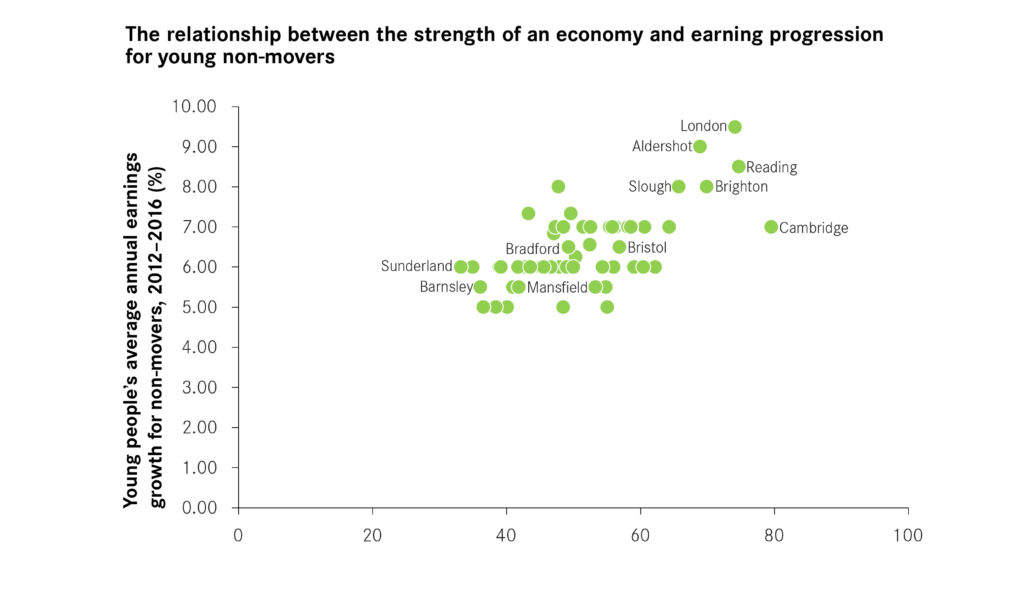 Source: NOMIS, Census 2011 and Office for National Statistics and Department for Work and Pensions 2012-2016

Cities with weaker economies such as Hull, Barnsley and Wakefield have seen limited earnings growth for young residents. In these places, the average earning increase between 2012 and 2016 was five per cent. This is lower than the average for non-urban areas which was 6.8 per cent.

Earning gains for those who did move were typically higher, especially for those moving from non-urban areas. On average, a young mover from a non-urban area improved his or her earnings by eight per cent over the time period, 1.2 percentage points more than those who did not move. Those moving from rural areas gained on average more than those moving from cities regardless of whether they moved to one of the major urban areas or somewhere else in the country. And this is particularly true for young people moving out of non-urban local authorities outside the London commuting belt. 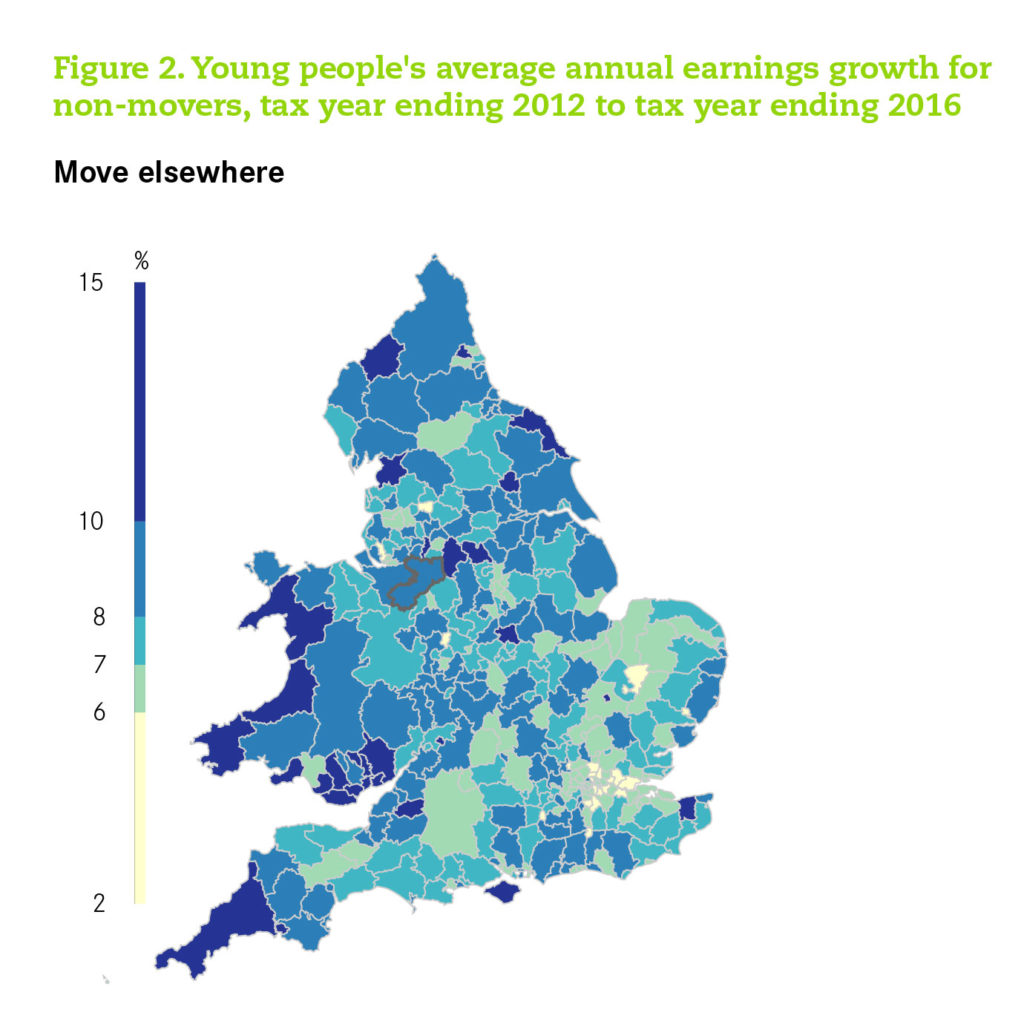 Among movers, the biggest winners are – perhaps unsurprisingly – those moving to London. On average, a young person moving to London between 2012 and 2016 could expect a 23 per cent increase in earnings, with higher gains for those moving from further away. Among young people already living in an urban area, the biggest winners from a move to London were young people from Exeter who on average saw a 45 per cent increase in earnings. Young people from Hull, Wakefield and Warrington benefited too, with an increase in earnings of approximately 30 per cent. On the other hand, those moving from cities already in the proximity of London, such as Southend, Crawley, Slough and Basildon experienced a much smaller gain from moving to the capital. 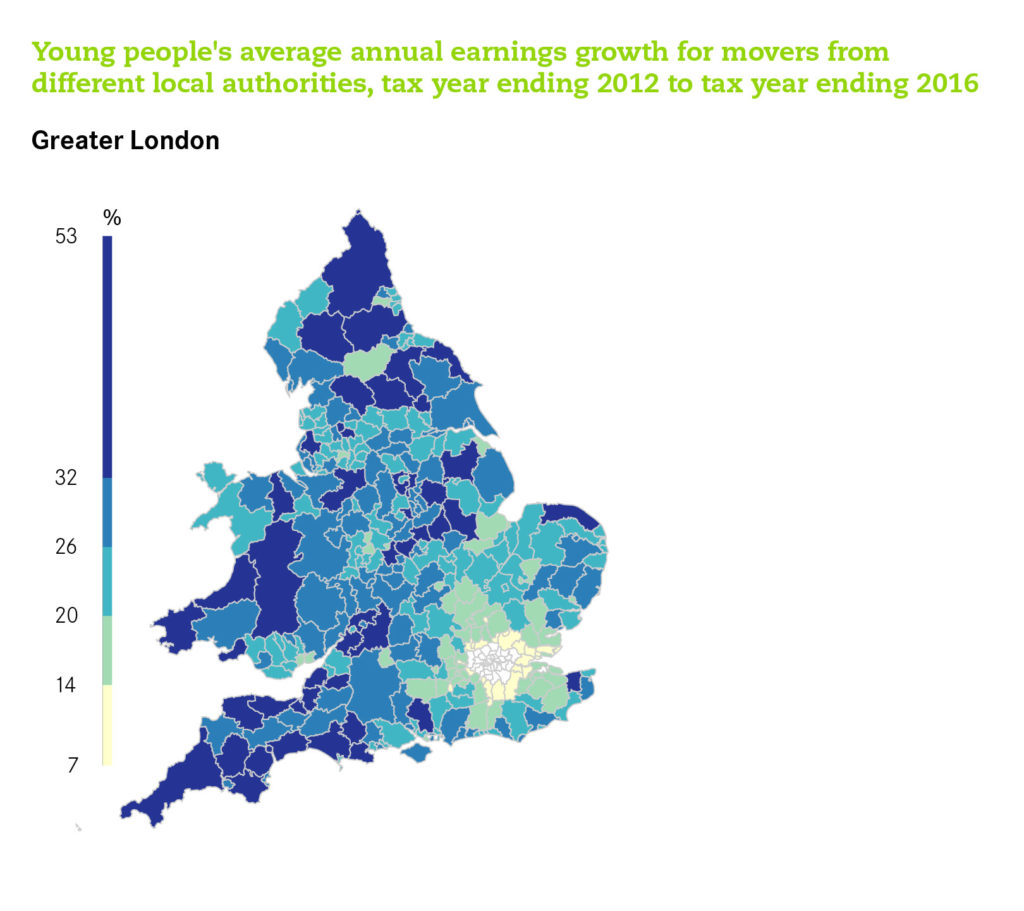 Greater Manchester, the West of England and the West Midlands all provided earnings growth for those who decided to move there. They attracted fewer people than London and most of the movers came from nearby local authorities, but nevertheless, earnings increased for those who moved. Among these three combined authorities, people who moved to the West of England saw on average the biggest increase in earnings (+15%), but people who moved to Greater Manchester (+13%) and the West Midlands (+12%) benefitted too over the 2012-2016 time period. 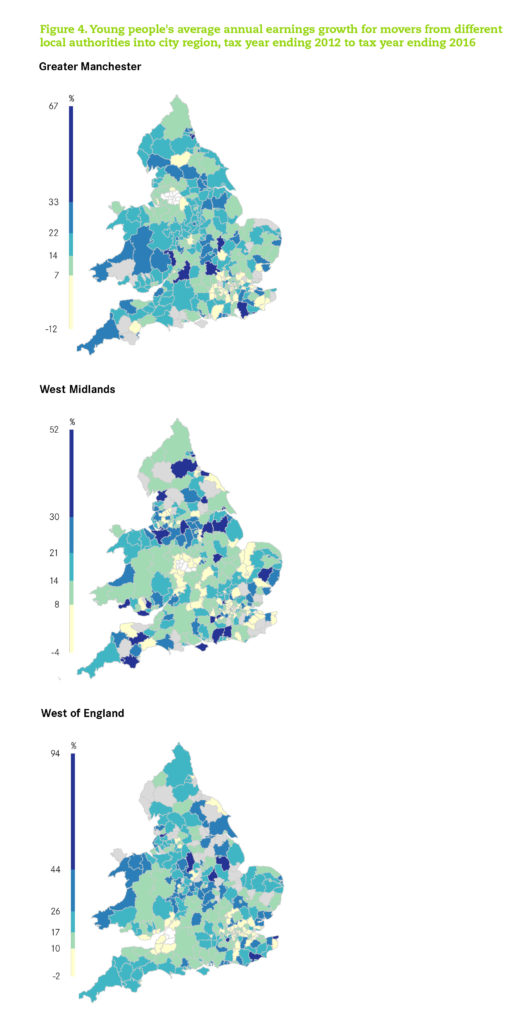 What does this tell us?

As always, the story is much more complicated than ‘those who move are better off than those who don’t’. Where people are moving from and to where matters. This is because a third factor – the economic success of a place – plays an important role too. Hence, for a city to provide decent opportunities to its residents, both new and old, it is important to focus on those policies aimed at creating a vibrant labour market where businesses can thrive and create economic benefits for everyone.

(Disclaimer: these experimental statistics have been created linking Census data with administrative datasets. To aid interpretation and avoid misunderstanding the ONS encourages reading the results alongside the methodology).