Yesterday saw the launch of our new report looking at how city deals have enabled partners to respond to local demand for skills. Devolution has been a central theme in discussions at the recent OECD and LGA conferences, and it continued to be  yesterday. As part of our research partnership with UKCES, we wanted to take the opportunity to look back over the last five years and examine the extent to which City Deals, Local Growth Deals and Devolution Agreements have enabled cities to respond to the needs of their local economy, with the aim of setting out priorities for employment and skills in the new parliament.

Employment and skills policy was at the heart of many of the deals designed to devolve more down to the local level between 2010 and 2015, in part due to recognition among local partners of its fundamental importance within economic development. The deals saw the establishment of apprenticeship hubs, youth guarantee schemes, skills brokerage services for businesses and a wage progression pilot. But the nature and scale of individual deals varied as the Government took a tailored approach to the deal-making process. The deals negotiated by Manchester and Sheffield were perhaps the most significant. Sheffield City Region for example took control of £28 million within the Adult Skills Budget and Greater Manchester has agreed that it will have the power to restructure further education provision in the city-region. So are we seeing a shift towards the needs of local businesses being incorporated into the design and delivery of employment and skills policy?

To try and answer the question we developed a framework incorporating what the evidence suggests are necessary conditions for effective local demand-led systems: 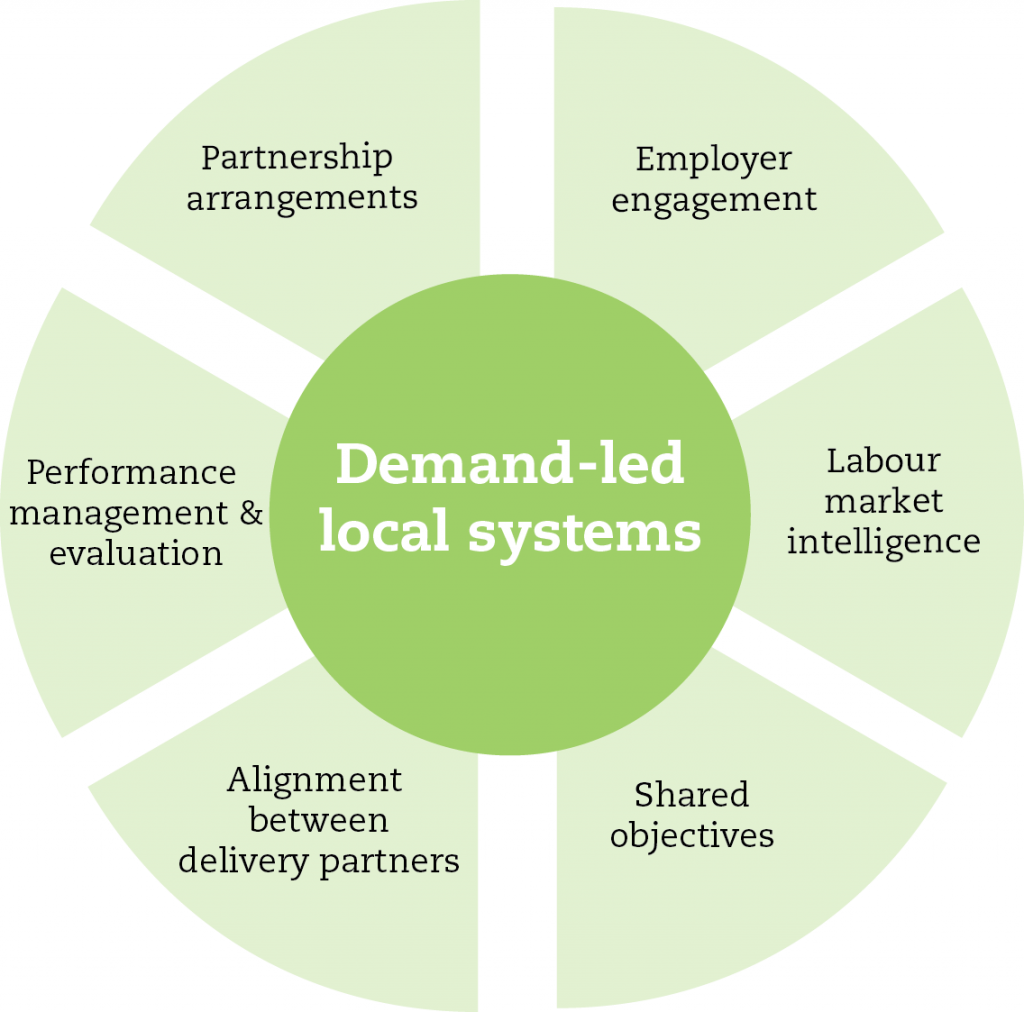 Positively, while many local partnerships have long been in place, the deals acted as a catalyst to further strengthen and widen partnerships across sectors, cities and city regions. They’ve also provide an incentive for employers to come to the table, as they can see “a local vehicle for dialogue about their skills needs”. There’s now more demand for local labour market intelligence and a number of cities are developing their use of data to inform strategy. But as Stephen Overell from New Economy Manchester pointed out at the report launch, data often ends up raising more questions than it answers. And it can’t solve problems – it has to be seen as a complement not a substitute to good decision-making.

Yet there’s still room for improvement, particularly when it comes to aligning services at the point of delivery. Central government still largely controls the design and delivery of employment and skills policy, and there needs to be better coordination across policies and with local partners. The establishment of local outcome agreements involving real commitment from partners to collectively respond to local priorities offers a potential solution here. But there’s still the outstanding question of whether there would be strong incentives and flexibility within current funding structures for different organisations to align their resources and approach to local need. Employer engagement still needs to be strengthened in ways that helps to raise the demand for skills and encourages co-investment from businesses. The advice given yesterday by Leona Seaton from the Glasgow Chamber was to keep it simple, approach businesses in a way that is going to be useful and relevant to them, and challenge them to get involved in a way that reinforces the mutual benefits that can be derived.

Devolution is only part of the answer, but it does offer the opportunity to address some of these issues. Continued austerity makes it all the more challenging, but also makes coordination and integration all the more important.