Last week Andy Haldane, the Chief Economist at the Bank of England, published his latest in a series of thought provoking think pieces about the economy. It posed the question, ‘is all economics local?’

This is quite a departure from the thinking of the Bank of England (and no doubt any other central banks around the world). The Bank has for the most part seen the UK economy as one single unit, rather than a collection of many hundreds of smaller economies. And when it has looked beyond the national headline, it hasn’t tended to do much more than a cursory look at regions, which as a unit of analysis miss much of the variation that we see across the country and the reasons for it.

So it was very pleasing from our point of view that Andy has addressed this question head on, and hopefully this will set the tone for how the Bank looks at the economy in the future.

If Andy’s speech represents the frontier of the Bank’s thinking on subnational economics, it shows however that there is some development of thinking that is required.

This is underlined by the cartogram below, which was used in the speech. It shows how complex or ‘sophisticated’ an economy is, based on the type of activities that take place there, with more complex economies being larger in size. What jumps out here is that in general, the economies of cities are more complex than elsewhere. But this wasn’t noted in the speech, despite being crucial to understanding the patterns that the cartogram shows.

A cartogram of complexity of economic activity across the country 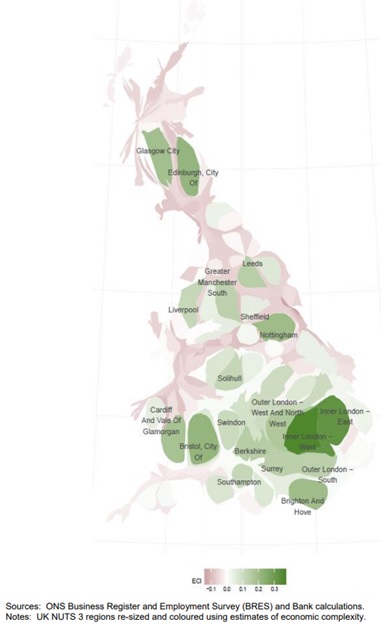 This pattern occurs because of the different benefits that different places offer. Cities (and city centres in particular) offer access to a large number of potential workers and a network of businesses that companies can share ideas and information with (known as ‘knowledge spillovers’). In contrast, deep rural areas offer neither of these benefits. But what they do offer is a lot of land at a much cheaper price and access to the countryside, by definition, is on the doorstep.

Where businesses locate depends on the trade-off that they make between these different benefits. What the cartogram above shows is that those more complex activities choose cities.

Without this understanding, it would be perfectly reasonable for a policy maker to attempt to use policy levers to make the cartogram look more even across geography. And indeed Andy suggests that the cartogram could be used to help inform the forthcoming local industrial strategies. But the descriptive power of the statistics, which is really interesting, tells us little if it is not couched in a framework for understanding the role that different types of places play in the national economy.

This understanding then helps us to expect that central Manchester will be more complex or productive than Cumbria or Cornwall. And it should spur us to ask why it isn’t as complex as Bristol, Brighton or London, and design policy to respond to this.