New buildings often capture the imagination of policy-makers tasked with economic development in cities. However, too often they have lacked the data and knowledge they need to make the best decisions on commercial space in their places.

This is a gap we’ve tried to address in our recent report Building Blocks, which examines the composition on commercial property in cities in England and Wales. And to complement the report, we’ve also launched a handy new data tool, which will enable policy-makers and property professionals to compare commercial space across cities for the first time.

The dashboard allows you to look across three datasets: the types of commercial space in each city centre and suburb, high street vacancies across city centres, and the average quality of office space in city centres.

Leeds has a roughly average amount of office space in its city centre, but its offices are also of above average quality. However, although Leeds has slightly less retail space than other city centres, it also has a larger than average share of high street vacancies in the city centre. This suggests that while the city already has many office jobs, it may need to attract more to increase footfall for the high street. Another consideration could be to reduce or convert poor quality and unoccupied retail space into other uses in higher demand. 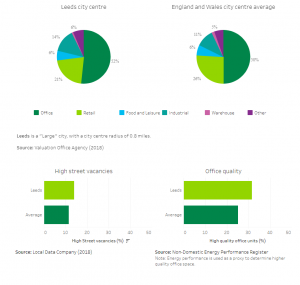 Bradford looks very different. It has less city centre office space than average, and much more retail – 40 per cent of the city centre are shops, compared to the average of 26 per cent across English and Welsh cities. Not only does Bradford have more shops than average, it also has twice as many high street vacancies – suggesting it has too many shops for the current size of its economy. The city also has far fewer-than-average high quality offices. 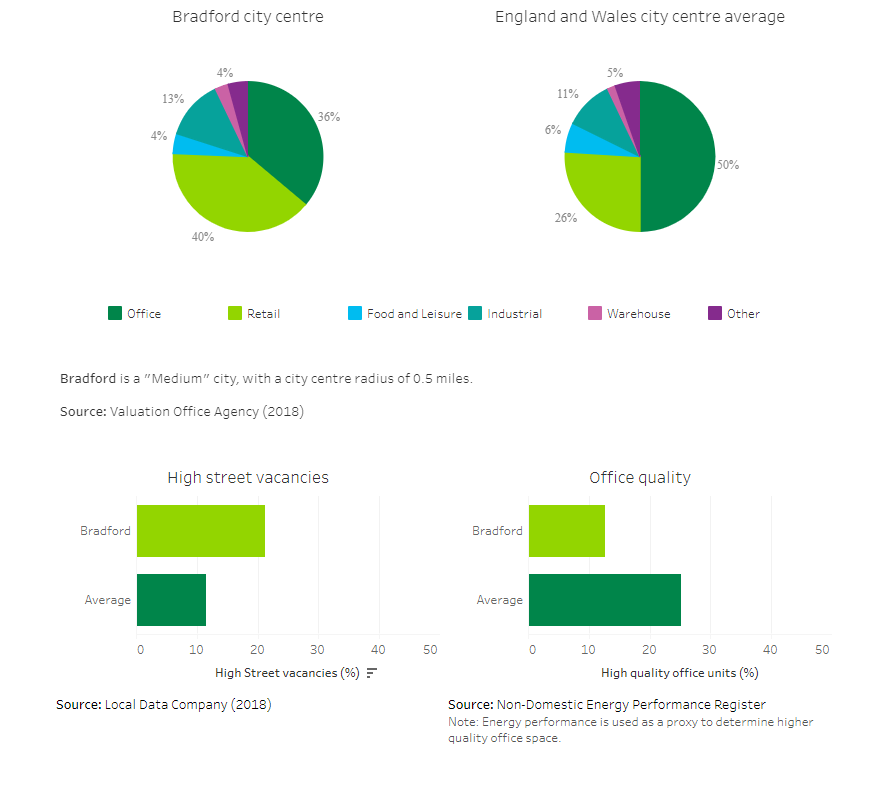 The dashboard shows that the commercial property issues faced by Leeds and Bradford are significantly different. While the commercial space in Leeds’ city centre is already orientated around office jobs and high-skilled, exporting work, Bradford relies too much on its weak high street shops.

To revive the fortunes of their high streets, cities like Bradford need to attract more jobs in high-skilled exporting firms which  prefer to locate in city centres – like marketing, IT, and graphic design – which can then support local services like shops and cafes. Building Blocks shows how Bradford’s City Hub office scheme is providing exactly the kind of commercial space needed to attract these kinds of firms to the city centre.

To get a sense of how the make-up of commercial space varies across cities, other places which are interesting to compare using the tool include:

We’ll continue to explore more of the report’s findings in more blogs over the coming weeks, and feel free to get in touch if you have any questions about the report or the dashboard.