Fourth of July is of importance in America every year but this year, it was special this side of the Atlantic too. Food and drink establishments were allowed to re-open for the first time since they shut their doors on 20 March. So for the first time in 15 weeks, people could go down to their local pub, get a pint and sit down – a less politically significant but a much cherished personal freedom had been restored.

Whether this played out the same way across the country is a different question altogether. Footfall data from our High Streets Recovery Tracker suggests that while it was indeed a ‘Super Saturday’ in our small cities and larger towns, it was much more a ‘Sluggish Saturday’ in London and other large cities. 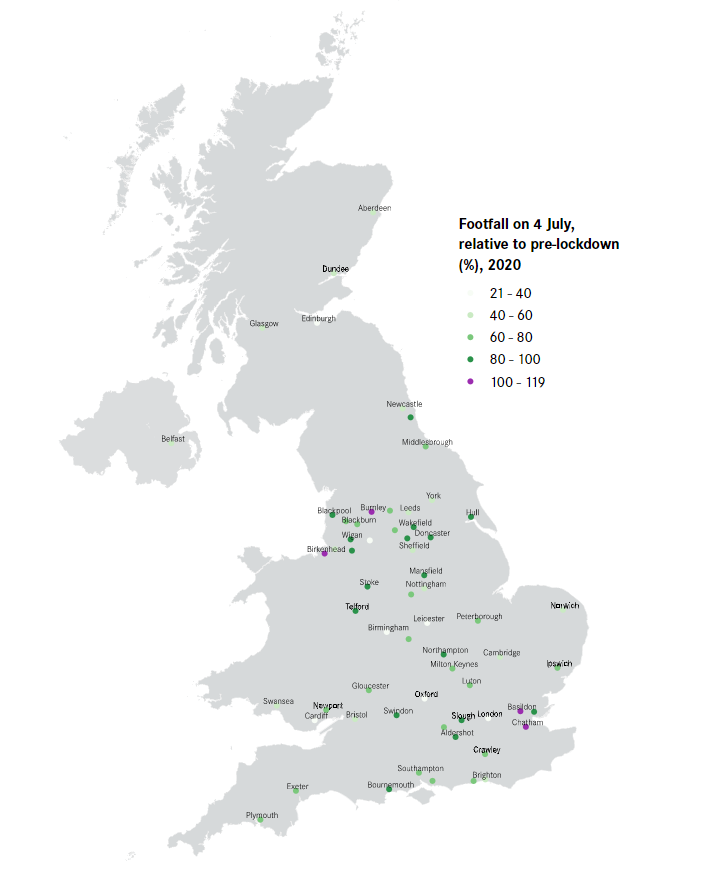 As a group, small cities were back up to 75 per cent of the footfall they used to have pre-lockdown. For medium-sized cities, this was 67 per cent. Birkenhead, Basildon, Burnley and Chatham led the pack, where footfall was in fact slightly higher than it was pre-lockdown.

At the other extreme, footfall has recovered to just over a fifth of what it used to be in Central London. This looks similar, albeit less severe, in other large cities, where footfall is back to 43 per cent of previous levels. Footfall in Manchester and Birmingham is just a third over what it was before the lockdown.

This mirrors the patterns we’ve seen through the lockdown. Figure 2 shows how footfall has evolved across cities of various sizes between February 13 and 4 July. 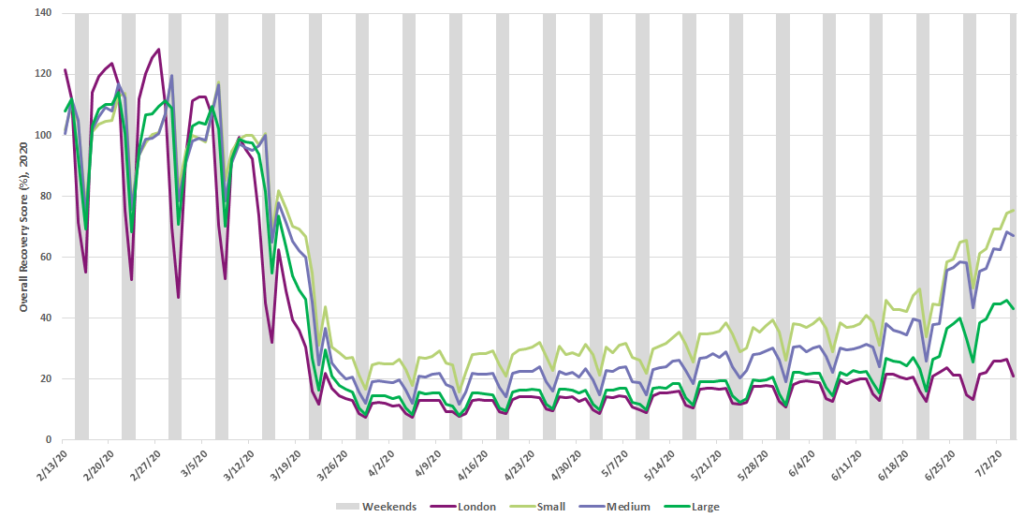 There are three key things to note in this:

There are three things potentially playing into this:

This and our other analysis on the topic suggests that we are unlikely to see large-scale changes in footfall and a ‘return to the normal’ in the city centres of the largest cities until office workers are welcome to and do return.

Data added to our High Streets Recovery Tracker in the coming weeks and months will show how successful the ‘Eat out to help out’ scheme and the VAT cuts (in place from today) will be in encouraging footfall. But it may just be that further support will be required to sustain jobs and help the businesses on the high streets of our most successful city centres if the return to the office isn’t on the horizon.