Calls for greater devolution, and fiscal devolution in particular, tend to provoke the following response: we’re just creating a system of winners and losers that will result in a ‘postcode lottery’ for public services, in which London will end up as a wealthy city state and a number of other cities that simply cannot cope will fail – as they do in the United States.

This response encapsulates the difficult issues and legitimate concerns about how local government, and the many public services it delivers, should be organised and funded in Britain today.

But fears of greater variation as a result of devolution tend to ignore the reality that centralised funding doesn’t necessarily guarantee the same quality of services everywhere. In the same way, devolved funding doesn’t necessarily mean variable performance. For example, Finland has a world class education system, known for its good outcomes regardless of social background (the opposite of a postcode lottery) while at the same time operating a highly devolved system of local government, with local municipalities entirely responsible for funding and delivering school age education.

There are choices about how to devolve powers and what level of financial redistribution there is between places. Designing a system that balances the need for cities to have the freedom to support growth, while maintaining a safety net for those places less able to generate revenues, will be challenging but it is doable.

Whatever that system looks like, increasing (or at the very least, maintaining) funding is vital for cities to continue to deliver the public services they do now. The direction of travel set by the Government in the recent Spending Review means there are limited choices when it comes to achieving this, especially over the next five years. Grants are out (or at very least significantly reduced and unlikely to increase) and the devolution of business rates from 2019-20 signals that cities will be expected to generate more revenue themselves to offset these grant cuts.

In particular, we have called for the Government to devolve control over land and property tax revenue (worth £57bn in 2014/15) alongside the business rate to local leaders, together with the responsibility for running and funding local housing benefit. Doing so would give local authorities responsibility and control for 41 per cent of their spending (based on 2014/15 figures), compared to just 19 per cent in the current system of funding – enabling local leaders to take spending decisions which better meet the needs of their economies.

The report also argues that places should also be able to retain a significant proportion of these revenues locally. This would create strong incentives for cities to invest in the things that can make a difference to their local economy, such as housing, skills and infrastructure. This would in turn generate more revenue for them to reinvest and more revenue for the overall local government funding pot to be redistributed to places with weaker economies. Under our proposed system, greater levels of local revenue retention would also mean larger sums to be redistributed to other places.

How devolution can grow the overall spending pot for local government 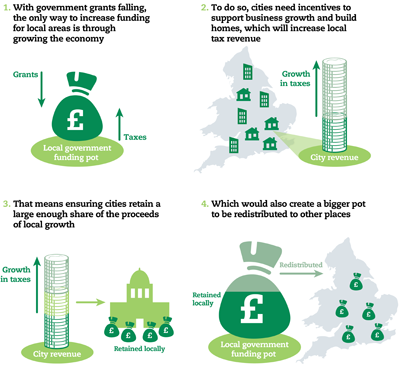 In the years ahead, cities and local government more generally will have to adapt to a significantly different funding environment, one that is much more dependent on locally generated growth-based revenues and much less reliant on central government needs-based grants. In this context, it is vital that fears of a public services ‘postcode lottery’ should not prevent places from accessing the growth tools and incentives they need to respond to the pressures that they face.