Cities of culture, museum districts and cultural heritage funds are widely used instruments in policymakers’ toolboxes, both in the UK and other developed countries.

In the UK the latest initiative of this type is the new £250 million Culture Investment Fund, launched earlier this week. The fund’s primary aim is to benefit a broad range of cultural projects and institutions across the UK such as libraries or museums. A large proportion of the fund will be used to extend the existing Cultural Development Fund, and for the UK City of Culture programme.

It is important to say that initiatives such as these are incredibly important, culture adds to the rich tapestry of life in our cities. Larger projects with national interest such as the Cities or Capitals of Culture can highlight the diversity of a country and shape the specific profile of a place or city independently from private interests and priorities.

But policy makers need to be more realistic about what they hope these cultural initiatives will achieve – the aims of which often stretch beyond culture and heritage and into the realms of economics. Many of these programmes assume that the establishment of cultural activities and amenities will automatically boost economic development and will make places thrive. Because of this belief, we often see major cultural interventions in weaker city economies such as the new V&A in Dundee or the Baltic in Gateshead.

Unfortunately the evidence doesn’t back up this belief.

The What Works Centre for Local Economic Growth has found that public investment in cultural and sporting activities have only limited economic impact. If they do deliver any wage or income effects, they are usually small and limited to the immediate locality or particular types of workers. Launching cultural initiatives alone is consequently not enough to unlock economic growth.

So how can policymakers deliver the economic growth needed to sustain demand for a range of cultural and leisure amenities in cities? Unfortunately there is no quick fix. When looking at which cities across the UK offer specialist and leisure amenities, it becomes obvious that it is mostly the stronger city economies that generate the consumer demand need to sustain them.

This relationship is illustrated by the Figure 1 showing the relationship of economic strength of a city indicated by its share of jobs in high-skilled exporting firms on the horizontal axis and its offer of specialist and cultural amenities per 10,000 population on the vertical axis. This is because people working and living in stronger city economies are more likely to be employed in better jobs. 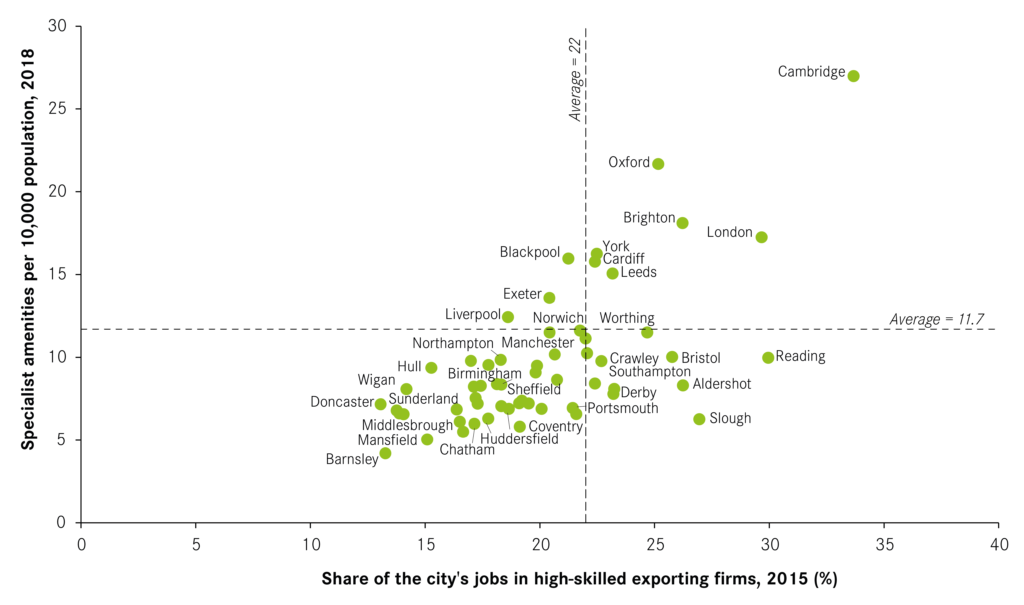 Their higher spending power creates a stronger demand for specialist and cultural amenities and their sustainable supply. The five British cities with the highest gross household disposable income for instance offer on average more than twice as many specialist amenities per 10,000 residents than the five British cities with the lowest disposable income in the UK, as illustrated below.

These combined insights from the What Works Centre and Centre for Cities have implications for investment in culture and leisure: injecting money for cultural activities into the economy without embedding them into a more comprehensive strategy for economic development is highly unlikely to have the desired effects in places which need these the most.

This is because these places are not able to sustain more specialist amenities as people living and working there do not have the money to spend.

It is misleading to assume that high-skilled jobs and people are following the attractiveness of a place. Rather than a desirable place to live, the availability of suitable jobs and career options are the main pull-factors that attract high-skilled workers with the spending power to sustain premium amenities and cultural investments.  Policymakers should keep this in mind when deciding how to improve local economies.