Garages on scrublands, old industrial land, roadside verges and empty spaces – these are the kinds of places most people would agree could be better used for housing.

That’s especially the case around London, with its high housing prices and housing shortages – yet locations such as these are protected as part of the city’s green belt, making it impossible to build housing on them. This is despite that fact that these sites are a far cry from the rolling countryside and parkland most people think that green belt restrictions are in place to protect.

That’s why Centre for Cities has come together with Siobhain McDonagh MP, and 60 other signatories from across the political spectrum, to submit an open letter today calling for reform of  green belt restrictions (this is also is part of a joint submission to the Government’s consultation on the draft National Planning Policy Framework).

Specifically, the letter called for green belt land that’s within 1km of train and tube stations and 45 minutes away from Zone 1 London to be released for new homes. We reckon this could supply enough land to build 1 million homes, more than enough for London’s needs over the next ten years.

Our 2014 report  Building Homes Where We Need Them gives an idea of just how much land near to existing infrastructure is available on the capital’s green belt, using a slightly different geography (2km rather than 1km, and including some stations that are further away than 45 minutes from Zone 1):

Opportunities for new homes in London 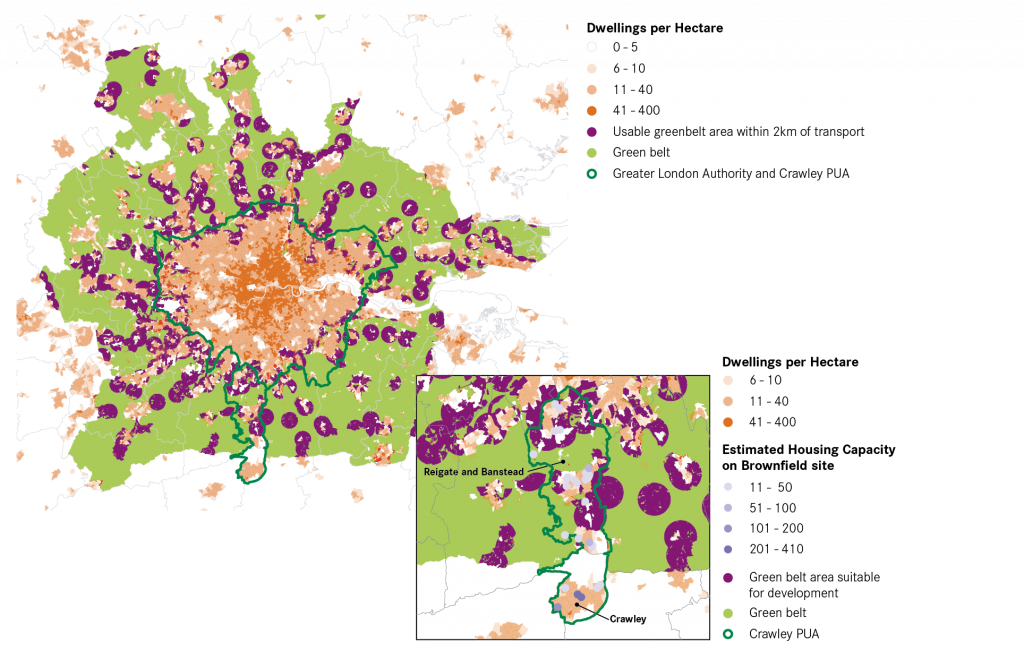 Releasing some land in these areas would help address the fundamental problem underpinning the housing crisis in successful cities such as London: supply. For years our cities have not been able to release enough land to accommodate their population and economic growth. This shortage has pushed the average house price in London up to almost 17 times local incomes – compared to five and a half times local incomes in Liverpool, for example – despite London’s higher wages.

Moreover, the green belt does not just restrict housing supply around London, it also results in housing development leapfrogging the green belt, and being built in areas far away from London – as demonstrated by the map below from our recent City Space Race report. That means longer commutes for people working in London, and it’s also bad news for the environment, as it results in more carbon-intensive journeys into the capital each day. 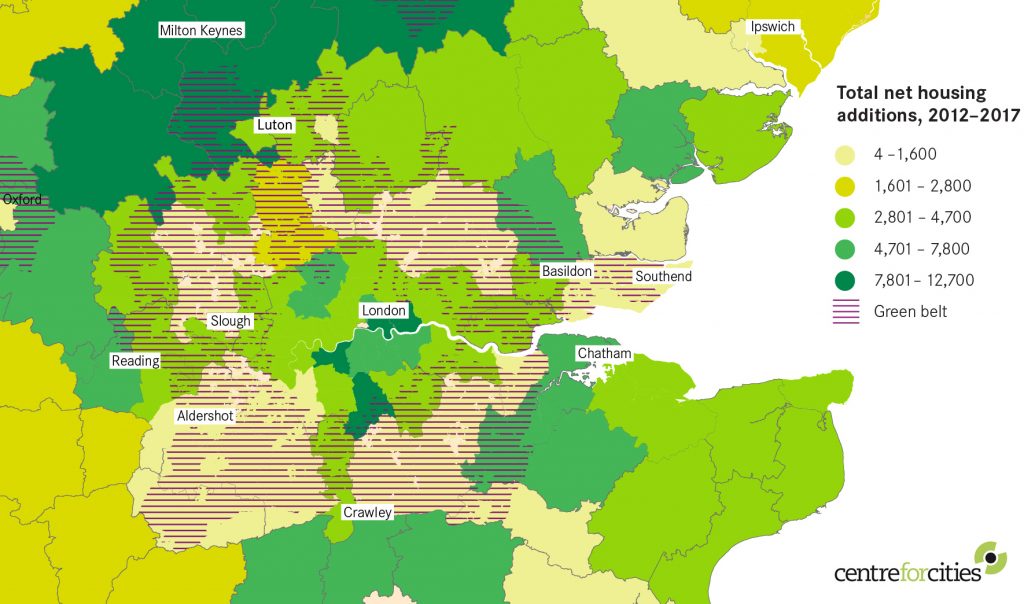 The reality is that releasing more land in or near London where we can build more homes is the only way we can tackle the capital’s housing shortage, and this is exactly what our joint letter proposes.

Crucially, it also suggests releasing new land in the right places. Land next to train and tube stations is exceptionally valuable, especially that on lines heading into London. If we allowed people rather than bushes to live in these areas closer to the city, we’d be able to minimise new infrastructure costs and commuting by car. In combination, we could make housing more affordable, support economic growth in high demand cities, and help the climate from reduced future carbon emissions.

What is striking is just how wide the coalition of groups and individuals in favour of green belt reform is. Signatories include MPs from both sides of the chamber, social housing associations including Clarion and Peabody, ‘neoliberal’ think tanks like the Adam Smith Institute, housing campaigning groups PricedOut and London YIMBY, and business groups such as the London Chamber of Commerce and Industry. Many of these groups hold vastly different political outlooks, but all agree that existing green belt restrictions are inflexible and out of date. In other words, there is growing consensus across the political spectrum that these policies need to change.

It’s right that precious and exceptional countryside should be protected, and other solutions will also be needed to address London’s housing crisis, such as increasing density. But as our cities grow and change it’s also right that we allow some green belt land – especially those areas in which there is very little green to be seen – to become new communities for families and new neighbours. More and more people across society agree that reforms to the green belt are urgently needed – and the political pressure for the Government to act on these concerns is only likely to grow.

Centre for Cities has also responded to the National Planning Policy Framework in its own right and will publish details of the submission in the coming week.